Despite winning a Supreme Court decision ordering the distribution, at last, of Hacienda Luisita lands to farm workers, their life has not become easier as soldiers continue to harass them.

HACIENDA LUISITA, Tarlac City – Out of fear, Michelle Mandigma, 30, left their home in barangay Balete in October last year. Along with her husband and seven children, Mandigma sought shelter at the office of the Alyansa ng Manggagawang Bukid sa Asyenda Luisita (Ambala).

Mandigma said soldiers had frequented their house located in the middle of the farm since Ambala, of which her husband is an active member, set up the picketline within the disputed land being claimed by the Rizal Commercial Banking Corporation (RCBC) in July last year.

“For months, they occupied the hut in front of our house, staying there for long periods of time,” Mandigma told members of a fact-finding mission, March 10. Mandigma said that the men wore civilian clothes but admitted to being soldiers. “They would ask us who are the NPAs [New People’s Army] here in the hacienda and who visits the picketline,” Mandigma said. The NPA is the armed wing of the Communist Party of the Philippines (CPP).

The fact-finding mission organized by the Alyansa ng Magbubukid sa Gitnang Luson (AMGL), Unyon ng Manggagawa sa Agrikultura (Uma), Karapatan and other groups revealed that military presence is notable in ten barangays (villages) inside the hacienda owned by the family of President Benigno S. Aquino III. Several units of the military under the 7th Infantry Division of the Philippine Army used barangay halls as their detachments, and occupied even the office of the United Luisita Workers’ Union (Ulwu) in barangay (village) Mapalacsiao.

According to international humanitarian law, soldiers are prohibited from using public places for their operations.

Mandigma further said the soldiers would sometimes arrive during midnight and her children would be awakened by the barking of the dog. “I did not want any harm to come to my children and so we left,” she said. Her eldest is ten and her youngest daughter just turned one.

Six days after, on October 23 last year, at around 8 p.m., a neighbor saw that their house was on fire. “Our neighbor came here to tell us about it. We immediately went there to put out the fire,” Mandigma recalled. Fortunately, only their comfort room got burned.

Like Mandigma, Florida Sibayan, 55, one of the leaders of Ambala, is a mainstay at the picketline. She has not gone home for years now.

During the massacre, Sibayan sustained gunshot wounds on her back. Shortly before the massacre, her house was riddled with bullets.

In a report , Maj. Enrico Gil Ileto, spokesman of the Army’s 7th Infantry Division (ID), said barangay officials themselves have requested for their presence. “They believe that the presence of the military in that area is necessary in order to maintain the peace and also serve to monitor and immediately respond to security, disaster and development concerns on a day to day basis,” Ileto said, citing a Jan. 21 manifesto issued by the barangay officials. 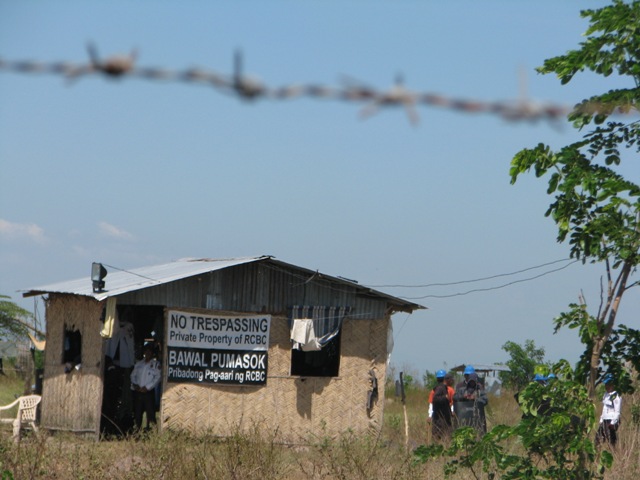 Security guards and alleged soldiers man one of the outposts within the land being claimed by the RCBC.(Photo by Ronalyn V. Olea / bulatlat.com)

Pastor Gabby Sanchez, father of one of the victims of Hacienda Luisita massacre, belied this. “The residents were not consulted by the barangay officials,” he said. “The meeting was held inside the Central [Azucarera de Tarlac]. Who else is behind this?” he added, referring to the Cojuangco clan who owns the biggest sugar mill inside the 4,915-hectare plantation.

Sanchez’s son, Juancho, was one of the seven farm workers who were killed when soldiers and policemen opened fire at the striking workers on November 16, 2006.

Except for barangay Balete chairman Renato Luna Jr., Ambala said the Cojuangco-Aquinos were able to coerce barangay chairpersons to sign an affidavit requesting for the military deployment.

Lt. Col. Ernesto C. Torres Jr., commander of the 3rd Mechanized Infantry Battalion whose men have been deployed in the hacienda, said the military is only implementing Oplan Bayanihan, the counter-insurgency program of the Aquino administration.

Joseph Canlas, AMGL chairman, said the military has no business staying in the hacienda, saying the issue is clearly an agrarian dispute and not an internal armed conflict.

“The main issue in the hacienda is land reform, when the lands are distributed, the military would have no reason to take over community activities as it would be covered by the farmworkers’ cooperatives,” Canlas said.

Testimonies of farm workers belied the benign façade put up by soldiers. 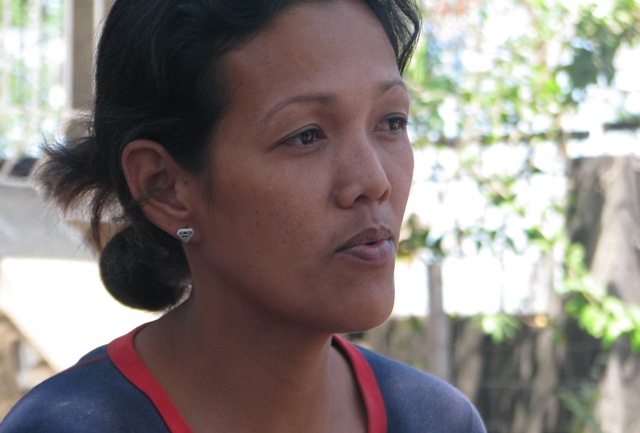 Michelle Mandigma has feared for the safety of her seven children since the soldiers frequented their house.(Photo by Ronalyn V. Olea / bulatlat.com)

Mila Gonzales,58, related that soldiers have asked her several times about the activities of the NPA in the area. Gonzales said the soldiers presented to her a notebook containing names of Ambala and Ulwu leaders. One of the soldiers told her, “Sila ang kaning dapat iluto.” (They are the ones who need to be boiled in hot water.)

On Feb. 20, Gonzales went up the stage located at the plaza in barangay Balete. When she was about to reach for the microphone, the soldiers warned her against speaking. “If I do not speak, how would the people know they are on the list of the military? We are only fighting for our land,” Gonzales said.

On the same day, 100 security guards, ten elements of the Tarlac provincial police and 15 members of the Philippine Army escorted the fencing of agricultural lands at Balete village, the very site of the cultivation campaign of the farm workers.

Elsie Ricardo, 57, recalled that day. “We uprooted the outposts set up by the RCBC security guards. They confronted us, armed with pistols and high-powered rifles. When we refused to leave, they started firing their guns at our feet.”

Anita Flores, 65, said that before the strafing, they told the soldiers not to put up fences because the Supreme Court has yet to issue a final decision on the disputed land. “The soldiers have always been on the side of the Cojuangco-Aquinos,” she said.

In November last year, the high court unanimously ordered the distribution of 4,916 hectares of Hacienda Luisita lands to the original 4,296 original farmworker beneficiaries (FWBs). While the SC ruled that the RCBC was a buyer in good faith when it acquired the 500-hectare land, the Ambala has filed an appeal, asserting that the Department of Agrarian Reform (DAR) should have revoked the conversion order it earlier issued.

“We were not cowed. There were many of us, mostly women. There was anger in our eyes, we did not feel any fear anymore,” Flores said.

Fortunately, nobody was hurt in the incident. 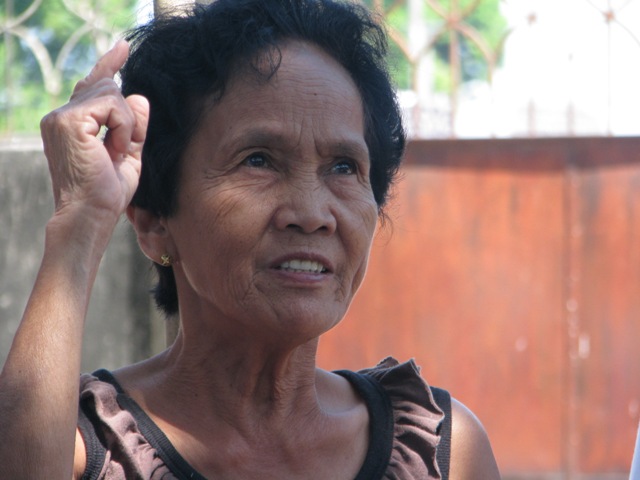 Days before, on February 6, Flores said they were also harassed by combined elements of security guards, policemen and soldiers. That morning, Flores, along with 200 other farm workers, went to the nursery of sugarcane plantation, with the aim of occupying the land for cultivation.

“They blocked us from entering the nursery. Some of the men covered their faces with bonnets. The soldiers had no nameplates,” Flores said.

The mission found out that the AFP actively recruits members of the paramilitary unit, the Citizens Armed Force Geographical Unit (Cafgu), from the barangays. In some areas, Cafgu recruits are provided with M-14 and M-16 rifles. They receive a monthly allowance ranging from P2,500 to P3,000 ($58 to $69). Some are recruited for intelligence work, targeting leaders and members of Ambala and Ulwu.

Sometime in August 2011, Ace Luna, 46, one of the leaders of Ambala, went to his hut located on his farm in barangay Mapalacsiao. He was surprised to see seven men, armed with high-powered rifles, sleeping there. When the men awoke, Luna was subjected to interrogation. The men introduced themselves as soldiers. It was only when two other farm workers arrived at the place that Luna was able to leave.

On March 12, 2011, Melissa Marquez, 21, a youth leader, was warned by a certain Villanueva, a member of paramilitary group Cafgu, not to leave their home in barangay Bantog. The Cafgu said Marquez is suspected of being a member of the NPA.

Three days later, at around 7 p.m., three suspicious-looking armed men entered their house and without saying a word, started searching the place. They left without saying what was they were looking for.

For months, Marquez, prodded by her mother, would sign the logbook at the barangay whenever she would leave and arrive at their place.

Just this February, barangay officials of Mapalacsiao called for the couple Leonor and Ronaldo Saroza, both 52 years old and Francisco Dizon, 42. At the barangay hall, eight soldiers led by a certain Sgt. Corpuz were waiting for them. The three, all leaders of Ambala, were branded as NPA members.

In a separate statement, Anakpawis Partylist Rep. Rafael Mariano said the intensified militarization in Luisita “is tied to the land dispute over the 4,915 hectares of land that was ordered for distribution to farmers-beneficiaries.”

Mariano will file a resolution to investigate the heightened military presence inside Hacienda Luisita.

“Aquino is shamelessly using the government machinery to protect his family’s private interest. This is corruption being committed by the highest public official of the country,” Canlas said.

Felix Nacpil Jr., Ambala chairman, said they would never allow the continued military presence because of the “bloody record of the Armed Forces of the Philippines inside the hacienda.”

“Though they deny knowledge of these merciless crimes, we would never be deceived by their posturing and implementation of civil-military operations,” said Nacpil, referring to the clean-up drive and other socio-civic projects being undertaken by the soldiers inside the hacienda.

The farmers are demanding for the immediate pull out of soldiers from the areas.

For Flores, despite the harassment, they would go on fighting. “We no longer fear anyone. We are only after the future of our families. What else can we leave to them but this land?”