Retired Maj. Gen. Jovito Palparan served former Pres. Gloria Macapagal-Arroyo well as chief implementer of Oplan Bantay Laya, and the Cojuangcos as ‘protector’ of their landholdings. Is it any wonder why, despite being subject to manhunt, he is still at large?

HACIENDA LUISITA, Tarlac City– It took seven years before Eliza Baldiviano, a resident of barangay Balete in this city, could retell the horror she went through at the height of the implementation of Oplan Bantay Laya (OBL), the counterinsurgency program of the Gloria Macapagal-Arroyo administration.

Facing members of a fact-finding mission, March 10, Baldiviano related: “Sometime in 2005, Rizal Hilario went to our house. He told me that he could arrest me for being a member of the NPA [New People’s Army]. He said, ‘You were in the mountains for years, you are an NPA.’ I said to him I did nothing wrong,” Baldiviano said, her eyes welled up in tears. “Then he asked me what Rene Galang, Satur Ocampo and Liza Maza had been telling me.”

At that time, Galang was the chairman of United Luisita Workers Union (Ulwu) that led the strike of farm workers in November 2004 while Ocampo and Maza were representatives of Bayan Muna who supported the strike.

Hilario repeatedly went to Baldiviano’s house, causing her anxiety. Hilario is known by human rights groups as the right hand of retired Maj. Gen. Jovito Palparan Jr., who, at that time, was commanding general of the 7th Infantry Division. The 7th ID covers the seven provinces of the region, including Tarlac. In December 2011, Palparan and Hilario, along with two others, have been charged with serious illegal detention and kidnapping in relation to the enforced disappearance of University of the Philippines (UP) students Karen Empeño and Sherlyn Cadapan. Both remain at large to this day. 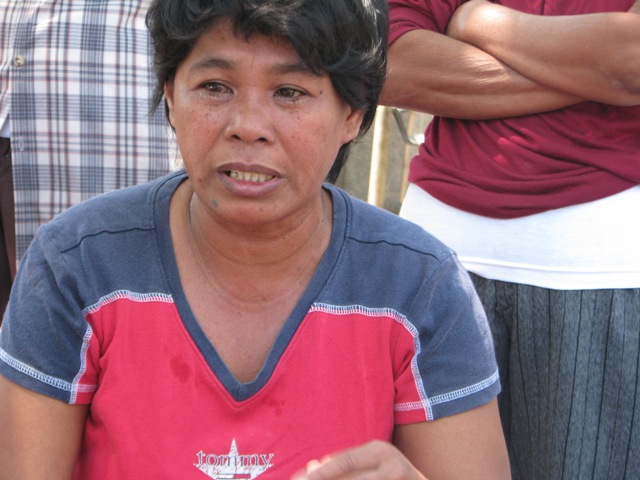 Eliza Baldiviano recounts the incidents of harassment she experienced during Palparan’s terror campaign inside the hacienda .(Photo by Ronalyn V. Olea / bulatlat.com)

“There were many victims of human rights violations at the time of Hilario and Palparan but they were afraid to speak back then,” Florida Sabangan, leader of Alyansa ng Manggagawang Bukid sa Asyenda Luisita (Ambala) said.

A former member of Citizens Armed Force Geographical Unit (Cafgu), Orlando Martinez also recalled his experience in the hands of Palparan’s men. “On December 22, 2005, Palparan’s men were having a drinking spree. They saw me and invited me to join them. After taking a shot, Col. Lobosta asked me to go inside the house they were renting. He suddenly pushed me to the wall. ‘Why, sir?’ I asked. He accused me of providing information on their activities to the leaders of people’s organizations.”

“I denied doing such. He put a silencer on his 45 caliber pistol and pointed it to my mouth. I told him ‘I was not doing anything wrong against you.’ He did not pull the trigger,” Martinez said. He somehow managed to escape from the situation. He went straight to the house of then barangay chairman Rodel Galang to seek refuge.

“The soldiers have no regard for small people like us,” Martinez said.

“That night, I and my wife heard the horn of the vehicle parked in front of our house. We looked outside and saw soldiers taking eleven individuals inside the house they were renting. Sensing danger, we kept watch. I called my parents, my siblings and our neighbors. It was only when barangay chairman Rodel Galang came that the eleven were brought to the local court,” Martinez said. 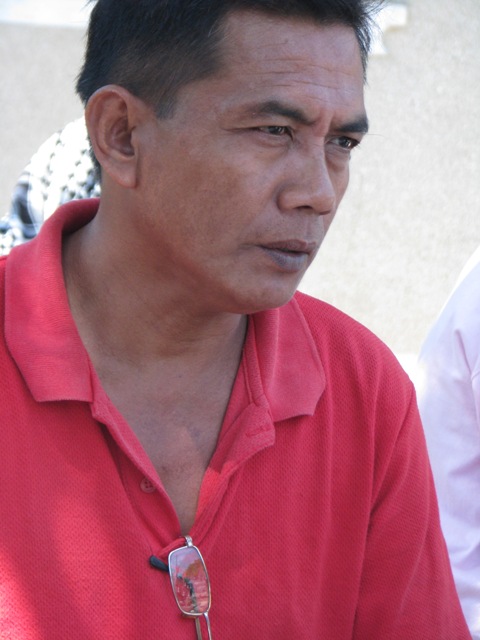 “The soldiers have no regard for small people like us,” Orlando Martinez says.(Photo by Ronalyn V. Olea / bulatlat.com)

The farm workers, all members of the Ulwu, were taken from the picketline in barangay Balete by about 20 soldiers. Three of the eleven – Arnold Cunanan, Malou Ricardo and Eduardo Martinez – were charged with illegal possession of firearms and of violating R.A. 3553 or Anti-Deadly Arrow Law.

The incident happened a few weeks after Ricardo Ramos, president of Central Azucarera de Tarlac Labor Union (Catlu) was shot dead by unidentified men. During this period, 300 soldiers belonging to several units under Palparan’s 7th ID were deployed in the villages of Hacienda Luisita.

Meanwhile, Jude Paligutan, then assistant to the chief of the barangay tanod (village watchmen) in barangay Balete, related that during Palparan’s reign inside the hacienda, they were keeping watch over their chairman Rodel Galang who had been receiving death threats.

“At night, we would hear gunshots. The street lights in front of Rodel’s house would be busted after,” Paligutan said.

“One time, I was called out by the soldiers to the house they were renting. They were insisting I was an NPA. They showed me a logbook containing names. I was included in their list. I told them I never left the hacienda,” Paligutan said.

Ambala leaders Francisco Dizon, Lito Bais, Boy Palaganas were just among the leaders who were frequently visited by soldiers. Dizon was even being enticed to work for the military. 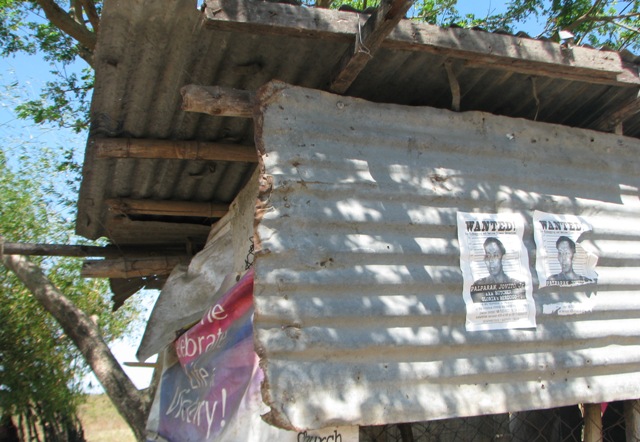 Records of Karapatan-Central Luzon showed that 71 individuals were killed and 46 were abducted and have remained missing since Palparan was transferred to the region until August 2006.

Farm workers are demanding justice for all the victims of human rights violations. Ambala members put up “Wanted Palparan” posters inside the hacienda. They have also joined rallies calling for the prosecution of Palparan.

Despite the one-million-peso bounty over Palparan, authorities have not located him.

Recently, an ecumenical delegation of Philippine human rights defenders asked for the support of international non-government organizations and foreign missions based in Geneva to call on the Philippine government “to step up its efforts to arrest Palparan.”

“A continuum exists in the previous counter-insurgency policy to the present one, Oplan Bayanihan, that perpetuates the same brand of terror, however cloaked with buzzwords such as ‘human rights,’ ‘peace and development,’ and ‘security sector reform.’ Through this policy, Aquino continues Arroyo’s and Palparan’s legacy of terror and violence,” Cristina Palabay, Karapatan spokeswoman said at a side event sponsored by the Aktionsbündnis Menschenrechte – Philippinen/ Action Network Human Rights Philippines, Amnesty International and the Franciscans International parallel to the 19th session of the United Nations Human Rights Council in Geneva.