A fact finding mission confirmed suspicions that four-year-old Rodelyn was killed by an explosion caused by an M203 grenade, belying claims of the military that an improvised explosive device from the NPA was the cause.

Panay – The Armed Forces of the Philippines (AFP) should stop its habit of blaming the victims of its human rights violations especially when the victims are children.

This was the statement of Karapatan and other people’s organizations in reaction to the AFP’s declaration on the killing of six- year-old Rodelyn Aguirre (not seven-year-old as earlier reported) last March 11 in Panay. Rodelyn’s three-year old sister Rhoda was also seriously hurt in the incident. The two children’s grandfather Julian who was with them rushed Rhoda to Calinog District Hospital realizing she was still alive. Rodelyn was immediately killed after shrapnel entered her abdomen, legs, neck and left eye.

On March 11, the Tumanduk Indigenous People’s Organization, Bagong Alyansang Makabayan (BAYAN) and Panay Alliance-Karapatan led a fact finding mission to gather evidence and testimonies regarding the child’s violent death. The groups said that based on their mission’s findings, the Philippine Army is to blame for it. They said the child was killed because an M203 exploded in her immediate vicinity. All evidences and testimonies are being compiled by Karapatan and Bayan -Panay and would be submitted as supporting evidence to the case filed at the Commission on Human Rights. 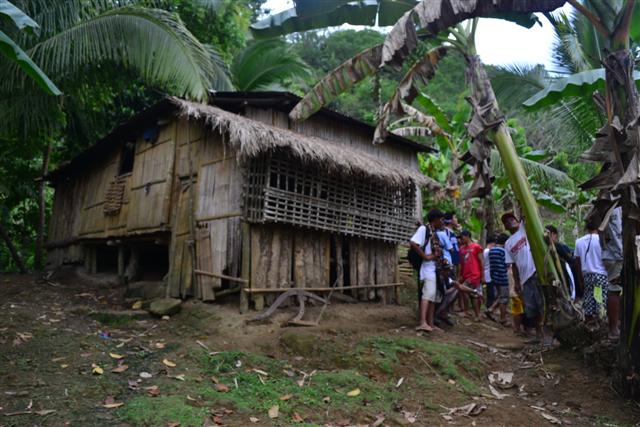 The groups journeyed for three hours across a mountainous area to get from Brgy. Garangan in Calinog, Iloilo to Brgy. Tacayan in Tapaz, Capiz. Once they arrived at the site, they examined the area where the explosion that killed Rodelyn took place. They said that based on what they discovered, the explosion was not caused by an improvised explosive device as claimed by the AFP, but by a missile from a grenade launcher. They suspected the missile to be from an M203.

Reylan Vergara, Secretary General of Panay Alliance-Karapatan said that what they found belies the claims of 3rd Infantry Division that an IED killed Rodelyn.

“Some of the evidence we gathered were pictures of the blast site, which was a mere two meters away from the house. We found no other damage in the perimeter of the structure. “If the explosion was indeed caused by an IED, there should have been a crater and the house should have been damaged extensively. It was strongly suggested that Rodelyn was killed from a direct explosion coming from a projectile,” she said.

Vergara also belied the statements of Capt. Java, 3rd ID spokesperson, when the latter said it was not only the Philippine Army who has access or custody of a M203 grenade launcher.

“They previously kept insisting that Rodelyn was killed by an IED that detonated. Now that various investigations are revealing that a grenade most likely caused the explosion, why are they changing their statements?”, she argued.Vergara condemned the denial of the Philippine Army and challenged them to face an independent investigation. “It’s very alarming that the Philippine Army would do anything to cover up their atrocities by blaming everything to the NPA” Vergara said.

The team was also able to speak with other members of Rodelyn’s family. Rodelyn’s grandfather, 76-year old Julian is now being accused by military officials of having made and detonated the IED. Aguirre denied the charges, saying that he was with the girls when the incident happened. He told the members of the mission that he immediately sought help from neighbors and barangay officials and told them that the explosion was caused by something that came from above and outside the house.

The military detachment is 200 meters uphill from where the Aguirre residence was located.

In a testimony of Brgy. Captain Celdic Diaz, he expressed bewilderment over why the military ignored the explosion when it was very loud and took place just a few meters away from the detachment. He said he even went to the detachment together with other barangay officials to convince the military to check the explosion site and see whether the fragments found in the site were similar to the ones in the camp.

Diaz said the military denied knowledge of the explosion and even challenged the community teacher to smell their guns to prove the explosion did not come from them.

Vergara said this was not the first time this kind of incident where the Philippine Army denied accidentally firing at civilians and other populated areas. She cited a similar case in the same barangay in the 2008 when the house of a couple and their livestock were hit by an M203 mortar strongly believed to have been launched from the camp of the 47th IB.

For his part, Bayan-Panay spokesman Lean Porquia said the Philippine Army, especially the 3rd ID and the 61st Infantry Battalion continue to hatch plots to harass and antagonize the Tumanduk Indigenous People and the people of Brgy. Tacayan.

In a military-run radio program DYK3 in Calinog, Iloilo, an unnamed anchor said “everyone in Brgy. Tacayan are members of the New People’s Army (NPA).

“This goes prove how desperate the Philippine Army is in covering up their atrocities and crimes against the people” he said.

Karapatan national chairperson Marie Hilao-Enriquez who also participated in the fact-finding mission also expressed outrage over the allegations of the AFP that Rodelyn’s grandfather is to blame for the child’s death.

“The lies of the AFP are preposterous! Rodelyn and her sister were hit by grenade shrapnel from an M203 launcher. The barangay residents believed that the explosion could only come from the nearby detachment of the 61st IB-PA as they often saw Army personnel Willy Faulo brandishing that weapon, ” Hilao-Enriquez said. 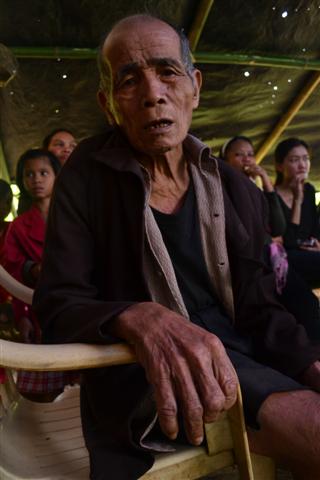 Results of the fact finding by Karapatan-Panay stated that on March 11, the two children were in their house with their grandfather, Julian Aguirre, when an explosion struck a few meters from their house.

The FFM’s report said that, “Rodelyn was hit by shrapnel from M203 launcher in “different parts of her body, resulting in fatal injuries. The most fatal wounds were on her left eye and her neck. The sister sustained superficial injuries on her face, arms and stomach.” Rodelyn died on the way to the hospital which was “two hours walk and another hour by motorcycle away from the village.”

Hilao said that based on reports of local human rights groups, the people in Brgy. Tacayan have ben long opposing and protesting against the military’s presence in their village.
“What this incident proves is that civilians’ lives are endangered by the mere presence of the military in the communities,” she said. Hilao pointed out that children are especially vulnerable to human rights violations.

In the meantime, Karapatan has also exposed a separate but related incident involving the AFP and its attacks against civilians.

On February 25, ten-year-old Michael Mancera and brother Richard, seven years old, were killed when soldiers from the 49th IB in Labo, Camarines Sur fired at their house. The dwelling was riddled with bullets. Recovered from different spots outside the house were a total of 231 spent shells from armalite rifles.

Karapatan said that to cover up the killings, the military tagged Benjamin, Michael and Richard’s father, as “NPA militia” and called the incident an ‘encounter’ between the military and the NPA.

Karapatan said it has been the practice of the AFP to immediately brand the victims of human rights violations as members or supporters of the NPA.

“The AFP often says that ‘legitimate encounters’ or ‘hot pursuit operations’ against the NPA are behind their operations that lead to rights violations against the unarmed civilians in the communities. They are mindless of who are victimized in the process because they have a healthy excuse — branding civilians, including children as rebels, as if branding a person as NPA or NPA supporter justifies extrajudicial killing,” she said.

The group reiterated its call for the pull out of all AFP units from communities and to put an end to Oplan Bayanihan.