In Congress there are 14 proposals and three resolutions calling for the review or scrapping altogether of the Oil Deregulation Law and Value-Added Tax on oil products.

MANILA – After announcing that it would not increase pump prices during the week the nationally coordinated Peoples Protest against oil overpricing was held, oil companies went ahead with another price increase this week.

Price of petroleum products increased Tuesday by P.60 per liter of unleaded gas and P.70 ($0.02) per liter of gasoline and diesel. So far, it is the ninth round of oil price hike this year, despite massive unrest over the said hikes, noted the youth group Anakbayan in National Capital Region.

This week, different groups held protest actions in separate locations to lash out at the Aquino government’s “coddling of the oil cartel.” Last Monday, drivers’ group Piston and multi-sectoral alliance Bagong Alyansang Makabayan (BAYAN) picketed the offices of the energy department to pressure the government to curtail oil overpricing and act on oil price hikes.

Another transport group retraced the March 15 route of the Piston-led protest caravan, picketed the head offices of the big oil companies and aired the same calls shouted last March 15 about scrapping the Oil Deregulation Law and the Value-Added Tax on oil.

“It is an outrage that Pres. Aquino chooses not to heed the clamor of poor Filipinos for relief from high prices of oil and basic commodities when more and more families are going hungry,” said Gabriela Women’s Partylist Rep. Luzviminda Ilagan.

The Gabriela solon criticized the Aquino government’s insistence on the continued implementation of its “Pantawid Pasada” transport subsidy program to jeepney drivers despite its marked failure. Rep. Ilagan pointed to the petitions for fare hikes as proof that Pantawid Pasada is a failure. “The fare hike petitions belie Malacañang’s claims that the transport subsidy program mitigates the impact of high prices of oil and petroleum products,” she said.

Aquino sleeping on calls to give people relief from oil overpricing

Contrary to what the officials and spokespersons of the Aquino government have been saying, they are not really without options in relieving the Filipino consumers of the increasingly high costs of oil products and its inflationary effects. In Congress there are 14 proposals and three resolutions calling for the review or scrapping altogether of the Oil Deregulation Law and Value-Added Tax on oil products. 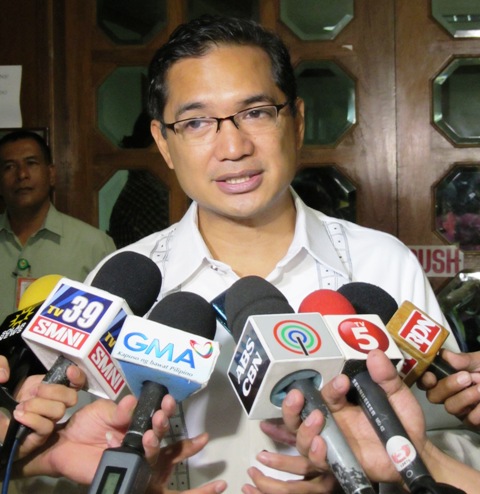 But all these bills and resolutions are still languishing at committee levels in Congress up to now, despite the growing clamor from progressive organizations and some lawmakers themselves. These bills are being ignored in the Aquino government’s listing of bills to be certified as priority.

“Again we are reiterating our call for Rep. Isidro Ungab to fast track House Bill 2719 to scrap the VAT from oil products and for Rep. Dina Abad to fast track House Bill 4355 to again regulate the oil industry,” said Bayan Muna Rep. Teddy Casiño last week at a forum held by lawmakers and people’s organizations in the House of Representatives. Casiño cited two of the 14 pending bills in Congress that would address the persistent problem of oil overpricing, but which the Aquino government and its allies in Congress have been ignoring for years.

Rep. Mitos Magsaysay said in the forum that in one of her talks with officials of the Department of Energy (DoE), she was told that they are just following the orders of the higher-ups. “That’s their edict on us,” a DoE spokesperson reportedly told Magsaysay when asked why they don’t direct the oil firms to stop oil price hikes.

Lawmakers also pointed to last week’s announcement of the energy department about the oil companies not pushing through with planned hikes for that week as proof that if pushed, the government can curtail hikes in pump prices.

The Aquino government can do a lot “if only it shows political will and concern for the people,” said Renato M. Reyes Jr., secretary general of Bayan.

Oil companies operating in the Philippines always cite changes in world market prices as reason for their frequent hikes in pump prices here. “But the global oil industry is dominated by a few transnational corporations whose prices are artificially bloated by speculation,” said Reyes.

Unfortunately, in the Philippines, the resulting “exorbitant global oil prices are fully shouldered by the consumers due to the Oil Deregulation Law.” It does not help that oil firms here are subsidiaries of global oil TNCs.

This is why various groups such as Bayan are pushing for a review or repeal of the oil deregulation law. Many progressive groups are supporting the passage of HB 4355 filed by partylist group Bayan Muna which seeks to regulate the oil industry.

“If House Bill 4355 is enacted there would be a centralized procurement of oil, a buffer fund would be set up to protect consumers, and Petron would have to be bought back by the government, so that we would be rid of this (overpricing) problem,” Casiño said.