MANILA – ‘While we are drowning in misery, they are swimming in luxury… We are like in a FPJ movie, we are being badly beaten first, before they deign to give us alms…” These and more are some of the messages delivered by just one of the conveners of the broad alliance against oil price increases yesterday, the Coalition Against Oil Price Increases (CAOPI). There are more from the conveners who cite similar pressing reasons for urging everyone to join the coalition.

The CAOPI counts lawmakers, church people, entrepreneurs, consumers and activist groups as members. “We gather here as consumers and as citizens, united in the common advocacy of bringing down oil prices. The Aquino government must act now. The people have had enough of high oil prices,” the group said in their launching at the University of the Philippines in Diliman.

CAOPI said it is supporting any and all possible measures to bring down oil prices, from the reduction, suspension or removal of the Value Added Tax on oil, the review or repeal of the oil deregulation law, and a probe into the pricing schemes of oil companies as well as a rollback in prices. 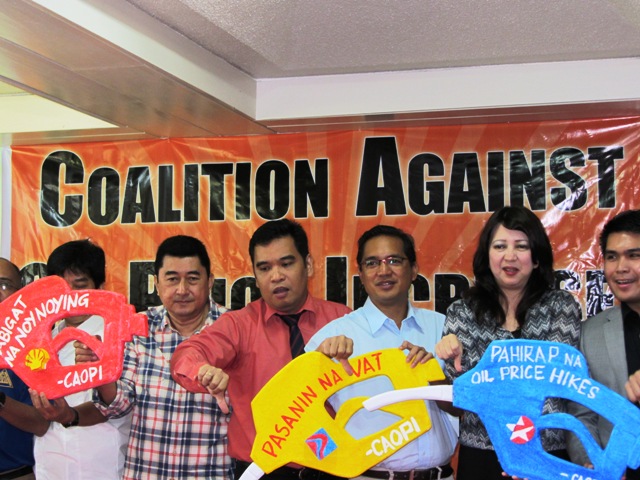 The group is not buying the standard response of the Aquino government to the almost weekly oil price hikes. “It is not true that the government is helpless. There are many options and possibilities for lowering oil prices. These range from short-term measures to medium-term and long-term proposals,” CAOPI said in a statement.

“Next week is holy week, but our trek to Calvary has been scheduled earlier,” said Renato M. Reyes Jr., secretary general of Bagong Alyansang Makabayan (Bayan), a member of CAOPI.

They called on all Filipinos to rally behind these calls. The group, for starters, is urging everybody to join a two-hour simultaneous noise barrage on March 30, from five to seven p.m.