While drivers are being forced to grapple with reduced income and the people with higher fares and costs of goods, the government and the oil companies are swimming in profits and the VAT windfall.” – Ricky Papa, truckers’ association

For Francisco Mariazeta, village chairman in Sampaloc, Manila, what prompted him to join the coalition was a couple’s squabble in his area that sprung from their difficulties in buying LPG for cooking. Their old budget of P700 ($16.32) for a tank was now not enough.

“Oil price hikes damage our lives and livelihood,” Mariazeta concluded. Such cases of family troubles springing from oil price hikes troubled him so much that he said he was shocked to hear the country’s president, the “head father” as he described President Benigno “Noynoy” Aquino III, issuing statements that there is nothing he can do about it. Mariazeta said he was just a village head yet he was bothered and willing to do what he can.

It is not true that the government is helpless in addressing the issue of oil price hikes, the CAOPI said in a statement. In Congress there are 14 bills and three resolutions seeking to address oil price hikes, ranging from amending to repealing the VAT on oil and the oil deregulation law.

“It is no time to be ‘Noynoying’ (doing nothing) when the economy and the peoples’ livelihood are taking a hit from oil price hikes,” said Casiño. He urged President Aquino and Congress to urgently address the issue of oil price hikes.

But in Congress, the Committee on Energy, which should have been deliberating on the proposals seeking to address high oil prices “seem to lack energy” in doing so, quipped Anakpawis Rep. Rafael Mariano. The House Committee on Ways and Means has also reportedly not yet acted on the proposals to slash or do away with the VAT on oil.

In Malacañang, Aquino and his cabinet particularly Energy Secretary Jose Almendras have already issued statements that they cannot do anything about the oil price hikes because of the oil deregulation law.

Such tack is described by CAOPI conveners, particularly by Zambales Rep. Mitos Magsaysay and Anti-Trapo Movement chairman Leon Peralta as a “huge case of corruption,” because it signifies a huge drain of the peoples’ hard-earned money, and it goes unchecked to the pockets of big oil companies and the government, too, because of VAT.

Peralta shared that their members in the Anti-Trapo Movement are “silently doing investigations on the graft and corruption involved in crude oil pricing issues.” He warned that they would file cases against those who “join the conspiracy to raise prices.”

Aside from being a case of corruption, doing nothing while the oil companies and the government are robbing the people of their money through high oil prices can also be considered a crime, said Anakpawis Rep. Mariano.

“Nationalizing the oil industry is not just a rhetoric,” said UP Vice-President Danny Arao, a convener of CAOPI. He said that as early as 1998, when he was working with the independent think tank Ibon Philippines, there were already doable alternatives seeking to resolve the present practice of the oil cartel.

The alternatives include removing the VAT on oil, buying back Petron to enable the government to play a more active role in the downstream and even upstream oil industry. This role includes the government actively figuring in buying, selling, processing of crude petroleum and doing more to increase the share of renewable energy sources in supplying the country’s energy needs.

But to date nothing much has been done on any of these proposals.

Arao said there is a “clear conspiracy between the local oil companies, the global oil TNCs and the government,” which is being facilitated by the oil deregulation law.

Even the little protection inserted by some lawmakers on the law on Value Added Tax for example, had been deleted in the bicameral proceedings and the final VAT law, complained former Negros Oriental Rep. Jacinto Paras, one of the CAOPI conveners.

Today, this inaction is pushing people into worse poverty. “The non-stop oil price hikes is a problem not just of the transport sector but by the entire nation,” said George San Mateo, national president of drivers and operators group PISTON, which is also a convener of CAOPI. 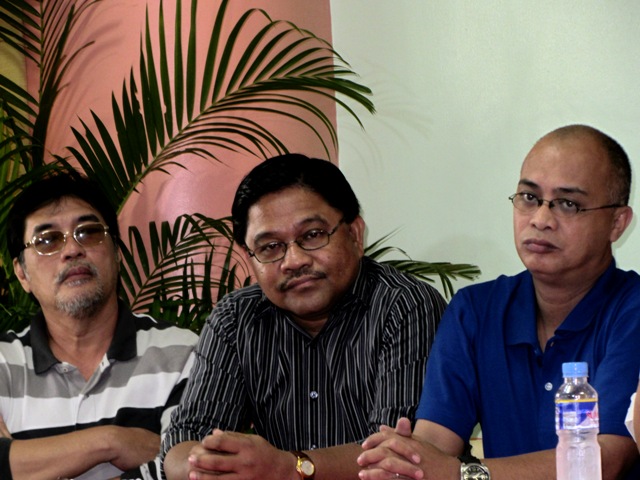 San Mateo reiterated that the government’s supposed response of Pantawid Pasada has not been acceptable to most drivers’ groups, “from moderate to progressive.”

While drivers are being forced to grapple with reduced income and the people with higher fares and costs of goods, the government and the oil companies are swimming in profits and the VAT windfall, said the president of truckers association, Ricky Papa, another convener of CAOPI.

The drivers’ group urged Aquino to suspend or reduce the VAT on oil instead of just handing out an “unacceptably” meager Pantawid Pasada or Pantawid Pamilya. The cash benefits it would give the public are bigger than the cash benefits the Pantawid programs have been giving, said Rep. Mariano.

CAOPI also slammed the immediate ‘do-nothing’ approach of the Aquino government to the peoples’ proposals for immediate and long-term relief from oil price hikes. To reports that not only President Aquino but House Speaker Sonny Belmonte had signified that he is “cool” to proposals removing VAT on oil and oil deregulation law, the CAOPI said “It’s uncool to do nothing about oil price hikes.”

They urged Malacañang and the House leadership to hold dialogues, public review and hearings first, before immediately dismissing proposals to lend relief to the problem of weekly oil price hikes.