You Are Here: Home → 2012 → March → 30 → As the public bidding draws near, opposition to sale of Welfareville intensifies

As the public bidding draws near, opposition to sale of Welfareville intensifies

Around 6,340 living-in patients, 56,000 out-patients, 1,713 health workers, and 20,000 residents will be affected by the planned sale of Welfareville, aside from the promotion of preventive mental health care, in the name of Public-Private Partnership projects.

MANILA – Margie, a patient of the National Center for Mental Health (NCMH) in Mandaluyong City, was holding a flag of the Alliance of Health Workers, an alliance of health workers’ unions, during a rally opposing the sale of the hospital, her home for more than 10 years.

Margie is supposedly an out-patient of NCMH. According to the employees who know her, her family did not accept her after several attempts of the hospital to return her after her confinement. Now she is living in the hospital for more than 10 years. She serves as an errand woman of the doctors, nurses and employees. But her home will soon be gone as the public bidding for the property will start in July this year.

The residents of Welfareville and health workers of NCMH once again voiced out their opposition against the sale of the said property in a Lenten-inspired protest action last March 27.

“Let’s be vigilant as the planned public bidding nears. The government has no clear plans as to where exactly the hospital will be transferred. We will not let the government sell this property,” said Romy Valenzuela, president of National Center for Mental Health – Alliance of Health Workers (NACEMHEA-AHW). 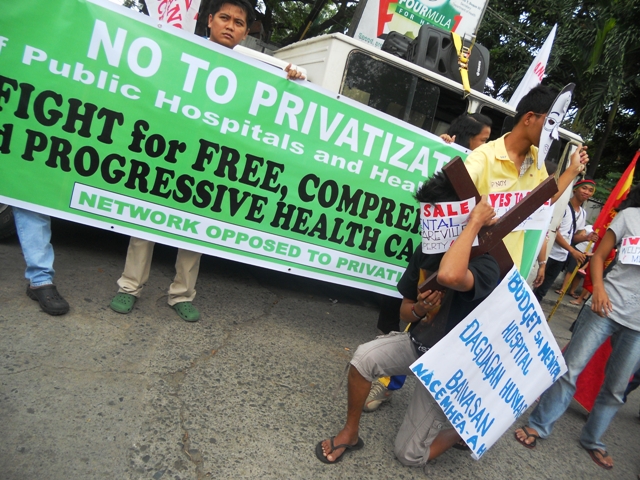 Employees of National Center for Mental Health held a protest action on March 27, as the public bidding to sell the hospital draws near. em>(Photo by Anne Marxze D. Umil / Bulatlat.com)

Health workers from other public hospitals also supported the struggle against the sale of the country’s sole hospital specializing in mental health.

Living-in patients of NCMH, 6,340 in all, will be affected if the sale of the Welfareville property pushes through, Valenzuela said. Likewise, 1,713 health workers will lose their jobs. The homes of Margie and the more than 20,000 residents of Welfareville are also under threat of being demolished.

Citing Republic Act 5260, the government, through Social Welfare Sec. Dinky Soliman, has once again been pushing for the sale. Soliman heads the Welfareville Development Project. According to Valenzuela, a stake holders meeting was held on June 29, 2011 but they and the residents of Welfareville were not invited.

The plan is to construct commercial, residential, and recreational facilities. But the government has no concrete plan as to where the hospital will be relocated.

“According to them, the NCMH and Correctional Institute for Women (CIW) should be transferred before the public bidding starts in July. Why are they fast tracking the sale of this land? The government does not have plans as to where they will transfer the hospital. First they said they will transfer us to Antipolo, then in Rosario, Cavite and then in San Mateo. Where will we go?” Valenzuela said.

“We are going to lose our mind because of what the government is doing to us,” he added referring to threats of unemployment of the NCMH health workers. Valenzuela has been working in NCMH as occupational therapist for 41 years.

The NCMH website says that it is “dedicated to delivering preventive, curative and rehabilitative mental care services.” But how will it fulfill its mandate with the planned sale of Welfareville?

According to a primer of the Alliance of Health Workers’ (AHW), the government plans to transfer NCMH in a 10-hectares undeveloped land in Inarawan, Antipolo City or in 10.2 hectares of land in Rosario, Cavite. The NCMH in Mandaluyong City lies in a 38-hectare land of Welfareville property. The government’s target location is not sufficient to serve the current 6,340 in-patients.

If the relocation of patients pushes through in a much smaller location, AHW said, the government plans to transfer other patients to regional hospitals. However, regional hospitals are not capable of handling mental patients due to lack of budget, facilities and skilled mental health professionals.

Bicol Sanitarium for one, AHW said, have more or less 300 patients with only one nurse and one nursing attendant. Also, regional hospitals only accept acute psychiatric patients.

Aside from the 6,340 in-patients, the hospital also serves 56,000 out-patients per year. According to NCMH data, 87 percent of the in-patients belong to classes C and D and are therefore, subsidized by NCMH.

Meanwhile, employees of NCMH blame President Benigno S. Aquino III’s Public-Private Partnership (PPP) in the health sector for the patients’ woes. Alliance of Concerned Teachers (ACT) Party-list Rep. Antonio Tinio who supports the health workers’ struggle said, “This PPP scheme for education and health will cost the taxpayers more because the government must guarantee the private sector partners’ return on investment. Commercialization of hospital land and other assets is not the way to solve the woes of the Filipino people,” Tinio said.

Tinio added that the IMF- World Bank, in its report “Investing in Health,” prescribed that the government should lessen its expenses on social services such as public hospitals. The purpose of this is to open opportunities for investments for private corporations, to earn profits at the expense of the Filipino people.

According to AHW, the World Bank will loan P4 billion ($95 million) to the government for NCMH’s transfer.

PPP in almost all public hospitals

With Aquino’s “universal health care” thrust, ironically, the NCMH and other public hospitals will be privatized purportedly to improve health services. However, for AHW, it only means that a basic social service like health will no longer be for free.

Sean Velches, convener of Opposed to Privatization of Public Hospitals and Health Services and a government nurse, said that aside from the sale of Welfareville, other government hospitals are up for bidding to big business through PPP, in the guise of modernization. According to Velches, the Philippine Orthopedic Center (POC), San Lazaro Hospital (SLH), Research Institute for Tropical Medicine (RITM) and 25 regional hospitals are targeted for the PPP program.