Euphemisms increase with US military expansion

Deceptions and misnomers cover the arrival, stay and conduct of US troops in the Philippines, as noted by progressive and patriotic groups who questioned, too, the very pretexts being used to expand US military presence in the country and in the region.

See also: Groups slam sellout to US by Aquino Govt

MANILA – Some analysts recently wrote that the United States now regards Asia as the new Middle East, in the light of its recent foreign policy shift toward Asia involving greater economic, political and military engagement in the region. But according to independent think tank Ibon Philippines, the shift has started as early as 2001 when the US Quadrennial Defense Review proclaimed a shift to Asia and a corresponding increase in US military presence through fixed bases, rotational deployments, training exercises and logistical arrangements.

As early as 2002, the US had called the Philippines its “second front [in the war on terrorism]” and since then, it has dramatically built up its military presence all over the Philippines.

Ibon has mapped the locations of US military exercises and other arrangements, called by different names, but essentially designed to ensure US military presence throughout the first decade of 2000s. “The US military has made extensive use of the Visiting Forces Agreement (VFA) to station some 600 to 700 special forces troops in the country and to bring in as much as 7,000 additional soldiers at a time under so-called joint exercises, civil-military actions and relief operations,” Ibon noted. It has also used the Mutual Logistics and Support Agreement (MLSA) to establish military outposts, have access to facilities, and construct warehouses for its war materiel. 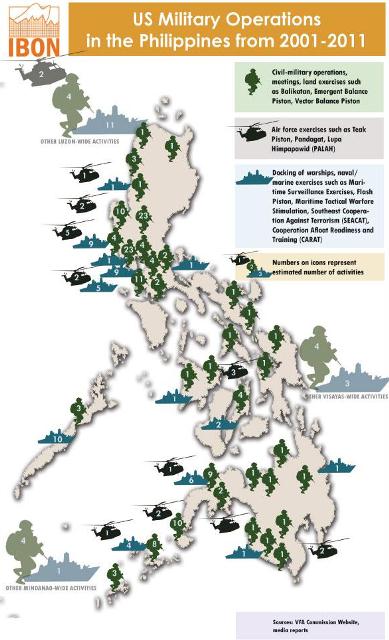 This month’s war exercises will be the biggest ever in Balikatan history. This will be the first time the war games would be held simultaneously in different parts of the country. Aside from Central Luzon, there would also be combined US-Filipino troops’ activities in Palawan, Cavite, Bicol, Mindanao, and even in the National Capital Region.

Initial reports said that nearly 5,000 US troops would participate, plus thousands of Filipino soldiers.

Some US troops are also to be deployed in urban centers, even in Metro Manila. Kadamay, a national organization of the urban poor, said this deployment is being disguised as part of the Aquino government’s disaster risk-management and other socio-civic programs.

“The US soldiers will not only aid in speeding up the demolition of our homes to give way to projects that would salvage the dying US economy. The mere presence of thousands of them in Philippine soil signifies the continued rape of our sovereignty which Aquino has welcomed in his desire to save his own administration,” Arellano said.

Environmentalists also scoffed at the excuses provided by the Aquino government for deploying US troops here, citing how the US itself has been the biggest contributor to environmental degradation which, in turn, results in disasters.

Calling a spade a heart?

There is also the denial that the US has military bases in the Philippines – even if they have exclusive use of and access to certain areas and structures within AFP camps. There are also discrepancies between the name and actual meaning of, say, the type of operations they engage in while here –they engage in intelligence operations, conduct exercises in areas suspected to be influenced by armed groups opposed to the government, and provide combat support to AFP troops during military operations. But they say they do not participate in local combat operations.

Another misleading name in the US military expansion dictionary is the term Balikatan itself, or shoulder-to-shoulder, supposedly connoting the joining of forces of Filipino and American soldiers. But “It is nothing more than an excuse to keep a permanent U.S military presence in the Philippines without a return to the much-hated era of U.S bases in our country,” said Charisse Bañez of Anakbayan.

The youth leader explained that this is “part of the Aquino regime’s propaganda offensive to make such a blatant violation of our sovereignty acceptable, or at the least, seemingly normal and harmless.”

The US government and the Aquino government are also making much of the United States’ big brother policing of the world, as the excuse for going after “rogue states” in the borderless war on terror. But in Philippine experience, the things they have been found to go after are securing the US economic and political interests at the expense of ordinary Filipinos.

Former Air Force Capt. Joenel Pogoy, a military whistle-blower who, while still in the military had been with US servicemen at some activities, told Bulatlat.com in an interview that the US military preferred to locate its camp in Mindanao because that island is nearer the neighboring countries in Asia that it wants to guard most. “Why would the US keep a base in the North when countries near it are already its allies?” asked Pogoy.

Second, he revealed that when the US flies its fighter planes over the Philippines especially in Mindanao, they are also scouring for oil and other natural resources available there.

Perhaps, the worst of all these deceptive mislabeling is the supposed friendship or partnership between US and Philippine governments and armed forces. This is a kind of friendship that calls for using force against Filipinos, such as arresting, mauling them, even shooting at them, if they question or protest the US military intervention.

“The Aquino administration is on full alert and is quelling any and all forms of protest which would destroy their carefully-manufactured lie that Filipinos want ‘G.I Joe’ back in our shores again,” said Bañez, national secretary-general of Anakbayan.

At least four anti-Balikatan youth protesters in Pampanga were arrested by the police this week. Other youth activists were reportedly mauled by attackers believed to be members of the military in Maguindanao.

The Aquino government is suppressing the Filipinos’ freedom of speech and right to peaceful assembly, Bañez said, citing as yet another example the Philippine National Police’s unspoken policy of violently dispersing any and all protests near the US Embassy in Manila.

Youth activists only managed to get near the US embassy in Manila when they conducted a lightning rally at dawn, while the police were still sleeping.

Progressive groups also warned against the warped sense of so-called nationalism being shown by Aquino in his pro-US conduct. “President Aquino shows a distorted sense of nationalism in giving in to the demands of the US in the guise of protecting national sovereignty,” Gabriela Women’s Partylist Rep. Emmi De Jesus said in a statement.

De Jesus explained that peace and stability does “not mean relying on stronger nations but on the ability of its leaders to ensure that the citizens’ rights and welfare are well taken care of. This is not happening in this country because President Aquino has not shown political will in asserting Philippine sovereignty and is serving as a neocolonial adjunct of the US.”