I know I am a stranger to you. I last saw you four years ago, after the United Nations Human Rights Committee issued a resolution on the murder of your mother Eden Marcellana and peasant leader Eddie Gumanoy. You barely spoke during that interview but your words struck me. You said the decision could not give back your mother’s life.

I do not want to imagine how cruel life has been to you and your sister Ara. At seven, you lost your mother. You are 16 years old now and the nine years that passed bear witness to the injustice done to you.

How was she as a mother? I dared asked you. When you wanted new clothes, she would buy you and your sister from the local public market. You remembered her taking you to Jollibee, buying food for you and Ara. She would not buy anything for herself.

As I listened, I wanted to cry with you. I tried so hard not to lose my grip on the camera I was holding.

I had the chance to meet your mother a few times. The last time I saw her was during one of the activities of the College Editors Guild of the Philippines (CEGP)-Southern Tagalog. She gave a lecture on the human rights situation in the region.

I recalled her telling student journalists how retired Gen. Jovito Palparan Jr., then commanding officer of the 204th Infantry Brigade based in Oriental Mindoro, publicly vilified her as a member of the New People’s Army (NPA). She met Palparan face-to-face and she was never intimidated. She said she was only fighting for human rights. 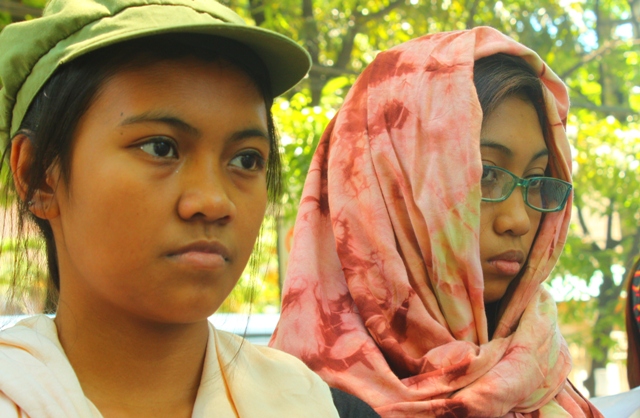 Dana Marie (left) and Ara join the protest action marking the ninth death anniversary of their mother, Eden Marcellana, April 20 in front of the Department of Justice.(Photo by Ronalyn V. Olea / bulatlat.com)

When she led that fact-finding mission in Gloria and Pinamalayan towns in Oriental Mindoro on April 20, 2003, she knew of the danger yet she risked her life. She was a brave woman. When she and Ka Eddie were found dead, with clear signs of torture, the people of Oriental Mindoro knew who was the mastermind.

While you seek justice for the death of your mother, your father Orly Marcellana, along with 71 other leaders of people’s organizations in Southern Tagalog, was charged with common crimes. For security reasons, your father had to be away from you. It is only now that the charges have been dismissed that you get to see him, you said.

Why do we have this kind of democracy? Why is justice too elusive?

I now realize how cruel it was of me to ask you what is your message to your mother. Your response broke my heart. You said you wish she were happy wherever she is although you could still not accept that she is gone.

I am certain Ka Eden is proud of you and Ara because you grew up to be fine young women. If she heard you say you would join your father in serving the Filipino people, I could imagine her smiling.

Keep on hoping and fighting. I join your desire to see Palparan and former president Gloria Macapagal-Arroyo behind bars.