“Firing a highly-rated performing employee and popular union leader only shows how companies are ruthless in using low-handed tactics to weaken trade unions and implement their profit schemes. No industry is spared, no character of employee is taken into consideration.” — EILER

Indeed, Aceña has worked well at HSBC’s credit approval for nearly five years; his contribution to the bank has apparently extended beyond approving credit, as he has coined himself, for example, the name of its bank-wide award traditionally being given by HSBC to its approved, model employees.

But in the beginning of March this year, HSBC suddenly suspended Aceña for 30 days, citing an alleged violation which the union is questioning to this day. Aceña is president of HSBC employees’ union. After he was made to serve the suspension, he was fired.

The reason for his suspension and eventual firing, and the timing of its execution, are both suspect, according to the statements of numerous labor groups and rights advocates such as the alliance of bank labor unions opposed to outsourcing (BFU 268), labor NGOs such as the Ecumenical Institute for Labor Education and Research (EILER) and Center for Trade Union and Human Rights (CTUHR), the Church-Workers Solidarity and the labor center Kilusang Mayo Uno (KMU). 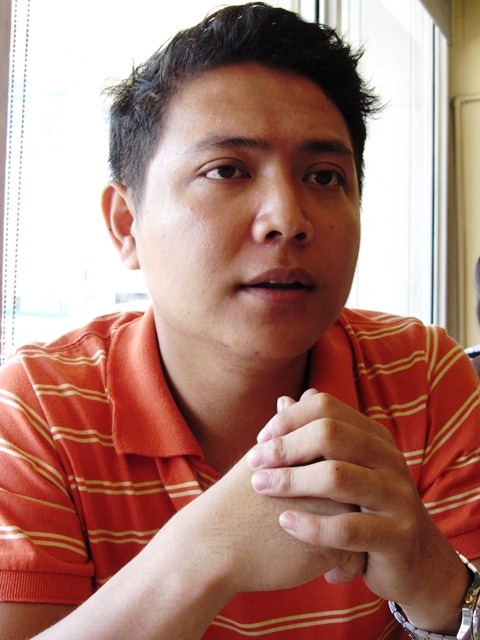 Among others, labor rights advocates view the HSBC management’s decision as an advance warning of more disasters to come to thousands of its remaining employees. Aceña and the union he leads are vocal critics of HSBC’s outsourcing program, which the union describes as just a scheme to cut down wage and benefits. The union leadership under Aceña is also reportedly not known for quietly accepting the HSBC management’s failure, for example, to deliver on the already stated employee benefits such as uniforms.

HSBC suspended Aceña halfway through the 60-day freedom period when another union could try to supplant the accredited bargaining representative, in this case the Hongkong Bank Independent Labor Union (HBILU). Aceña was apparently removed from the scene as a rival group struggled to challenge the HBILU. But despite the management’s requiring attendance of employees in these group’s meetings, plus allowing it to use company premises, the said group still reportedly failed to get the requisite number of employee signatures.

Before the second “seminar” called for by the HSBC-supported group was to take place, HSBC suspended Aceña. But no employee still turned up for the group’s second “seminar.” The first “seminar” had been turned into an occasion to “debunk” the current union’s viewpoints on a number of issues with the HSBC management, Kristel Esteban, vice-president of HBILU told Bulatlat.com, quoting the members who reported to the union after they were “forced to attend” the said seminar by their bosses.

Meanwhile, as much as 80-percent of union members (not yet counting those from Cebu) signed the petition appealing the HSBC management decision that suspended their union president.

When the freedom period was over, as was Aceña’s 30-day suspension, HSBC fired him and since then, barred him from entering the bank’s premises. “It’s like they stripped me of everything,” Aceña said. With his sudden termination, he was stripped, too, of his retirement pay which HSBC employees are supposed to receive after five years in service. He was terminated a month shy of five years.

He was also barred from entering the union office within the HSBC premises, even as a “guest,” while other bank employees belonging to the BFU 268 can enter.

Less than an hour after HSBC issued its decision to fire Aceña, the HSBC-supported group of employees filed a petition for certification of election with the labor department. They still do not have the numbers, said the incumbent union. But because of the group’s petition, the CBA negotiations are effectively delayed, the union leaders said.

Not only that, with their union president fired and barred from entering HSBC premises, even its union office, the union has suddenly found itself lacking one of its leaders inside, just when it is about to start with new CBA negotiations. The last leg of HSBC’s three-year outsourcing plan, where employees areat first relocated but later outsourced or “constructively” dismissed, is also up for implementation this year, Esteban told Bulatlat.com.

Suspended and fired for dubious reasons

But Aceña said that it has been an “unquestioned practice” in HSBC for the employees’ union to use its leaders’ email. During the tenure of the previous union president for example, the same union secretary had used the company email without the HSBC management questioning or punishing the union president for it.

In one of the HSBC-union talks during their 2007 collective bargaining negotiations, Esteban said they requested the management for a separate email for their union secretary. They were not given one, but Esteban recalled that instead, the management allowed the union to continue using their email.

“This is an old tactic of capitalists: fabricating cases in order to terminate workers who are asserting their rights. HSBC is so brazen as to use it against its employees’ union president,” Elmer “Bong” Labog, chairman of KMU, said in a statement.

The KMU described Aceña’s termination as “a desperate move of the HSBC management” in an effort to weaken the employees’ opposition to its outsourcing scheme. “It wants to reduce the union’s strength, send a clear message to union officials, and spread fear among employees,” said Labog.

HSBC stamping opposition to cuts in wage and benefits

The Ecumenical Institute for Labor Education and Research (EILER), an independent NGO, said HSBC has already attacked its employees’ job security when it outsourced 160 positions and as such reduced the union membership.

But that is not yet the end of it. The 160 “lost” regular employees, according to union leaders, are only part of the 300 employees performing 450 functions relocated in Alabang since 2009. Another 140 may lost their regular jobs this year.

“At first it was just relocation,” said Esteban. And then, she recalled, the HSBC management disclosed that the relocated will be outsourced in three years.

“We call it constructive dismissal,” said Aceña. Some 90 regular employees resigned after they found it difficult to adjust their lives from previous work locations to the HSBC Data Processing Phils. offices in Taguig. The union charged HSBC with illegal transfer and constructive dismissal; they accused the HSBC also of outsourcing regular functions.

“They (HSBC) told us it is not outsourcing – that it is the jobs they are outsourcing and not the people – but what will the employee do once his or her job has been out sourced?” Aceña asked.

After 300 employees were relocated to HSBC office in Alabang, the management made them train “challengers” from their HSBC Data Processing Phils.(HDPP) until the regular employees’ accounts eventually went to HDPP, said Aceña.

With the transfer of 160 employees were cuts in wages. Based on HBILU research,the regular employees’ average annual salary of P600-thousand ($14,118)to P700-thousand ($16,471) went down to P275-thousand ($6,470) after their transfer. The transferred or outsourced employees also no longer have a union, holiday benefits, retirement packages and health insurance.

Compare that to the HSBC union struggle for better CBAs which, in 2007, the management negotiator himself had noted as “the best CBA preparation coming from the union” in his 30-year career.

Outsourcing the job of the rest of the relocated 300 employees is now set for this year. And the union led by Aceña has been opposing it.

“HSBC firing a highly-rated performing employee and popular union leader as Aceña only goes toshow that no industry is spared, no character of employee taken into consideration, and companies are ruthless in using low-handed tactics to weaken trade unions and to implement their profit-gainingschemes,” said Anna Leah Escresa, executive director of EILER.

“Outsourcing and contractualization have turned out to be cash cows for companies. They aren’t shamed to taint their reputation to have it implemented, they are ruthless and barefaced in taking out anything or anyone who lays obstacles to its implementation,” the labor NGO said.

“Outsourcing and contractualization are being used by capitalists worldwide to extract bigger profits from workers and weaken workers’ unity,” said Labog of KMU. He assailed HSBC’s ‘Project Green,’ and the BSP Circular No. 268 that expressly allowed for outsourcing, as “proof that even white-collar employees in the banking sector are not spared from such anti-worker schemes.”

“This is another wake-up call for us workers. We need to unite and fight capitalists’ exploitative schemes. We have to defend our unions and form more unions,” Labog added.

The KMU said they unite with the HSBC employees in fighting for Aceña’s reinstatement and for job security, and in opposing union busting and outsourcing. Labog called on employees of the banking sector and all workers to support the employees of HSBC and fight for workers’ rights.”