MANILA — Topping this list is not an achievement for any country.

The Citizens’ Disaster Response Center (CDRC) has recently released its 2011 Disaster Report saying that the Philippines topped the list of countries most frequently hit by natural disasters last year. Citing the records of the Centre for Research on the Epidemiology of Disasters (CRED), Carlos Padolina, CDRC deputy executive director, said that of the 302 natural disasters that happened worldwide, 33 occurred in the Philippines.

CDRC is a non-government organization that pioneered and continues to promote community-based disaster management in the Philippines. It operates nationwide through a network of regional centers and people’s organizations. It maintains its own disasters database, monitoring both natural and human-induced disasters.

Based on the report, a total of 431 natural and human-induced disasters were reported in the Philippines in the past year. These killed 1,774 people, and affected more than three million families or 15.3 million people, and caused over P26 billion in economic damages.

“This is a more than 50 percent increase from the 2010 figure of 202 disaster events recorded,” said Padolina. 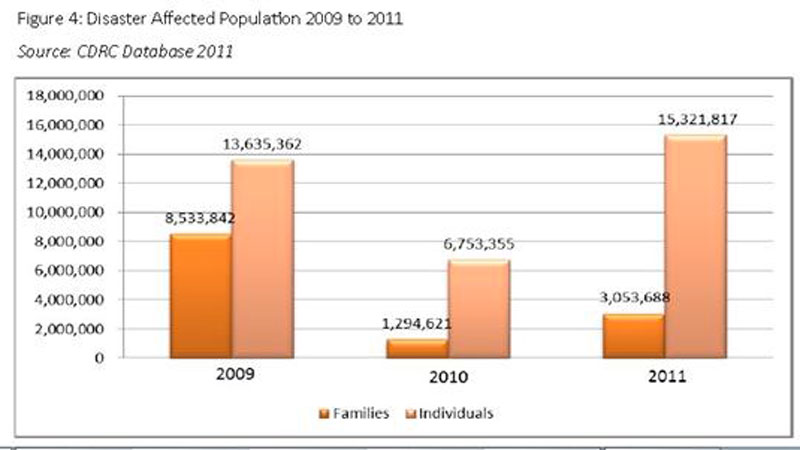 The CDRC’s 2011 Philippine Disaster Report presents information on disasters that occurred in the Philippines in the past year, providing an overview of the type of disasters that occurred, the frequency of occurrence, as well as the effects of these disasters on communities. Where available, direct economic costs to agriculture and infrastructure were also included. A substantial portion of the data 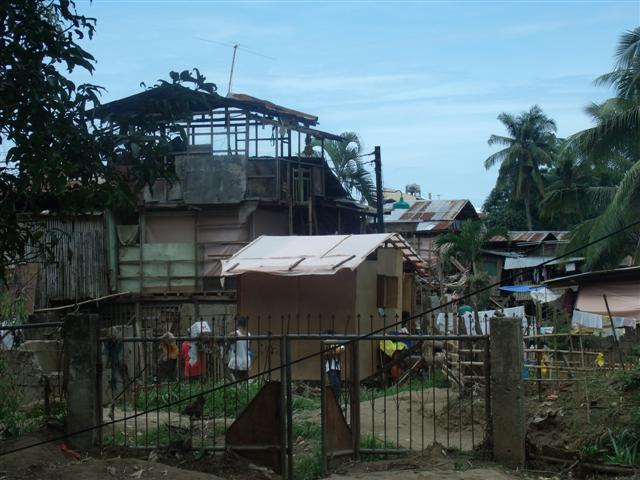 These pictures were taken in March 2012. Three months after Sendong, many of the affected residents in Cagayan de Oro have yet to return completely to normal. Many of the houses remain damaged, and roads are still full of mud.(Photos by Ina Alleco R. Silverio / bulatlat.com) 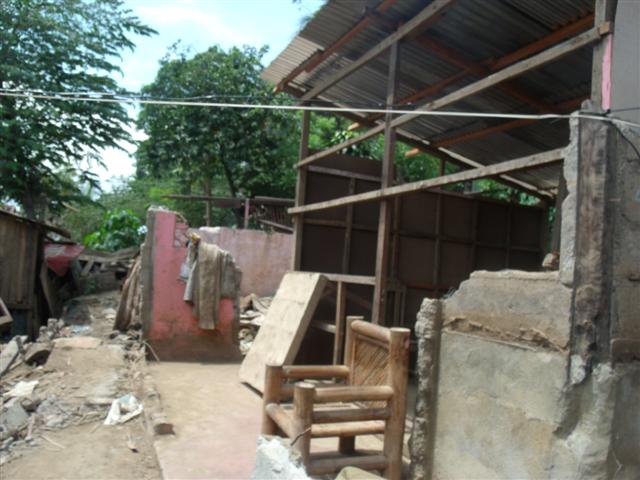 was gathered through CDRC’s disaster monitoring system, which relies on reports from Citizens’ Disaster Response Network (CDRN), a network of 16 regional centers all over the country.

Overview and supporting data were taken from the Department of Social Welfare and Development-Disaster Operations Monitoring and Information Center (DSWD-DROMIC), the National Disaster Risk Reduction and Management Council (NDRRMC), and articles in major newspapers. CDRC verified the data through various sources to ensure accuracy.

“These natural and human-induced disasters combined affected more than three million families or 15.3 million people, and caused over P26 billion in economic damages. This is a major increase compared to 2010’s figures when 6.75 million people affected,” Padolina said. 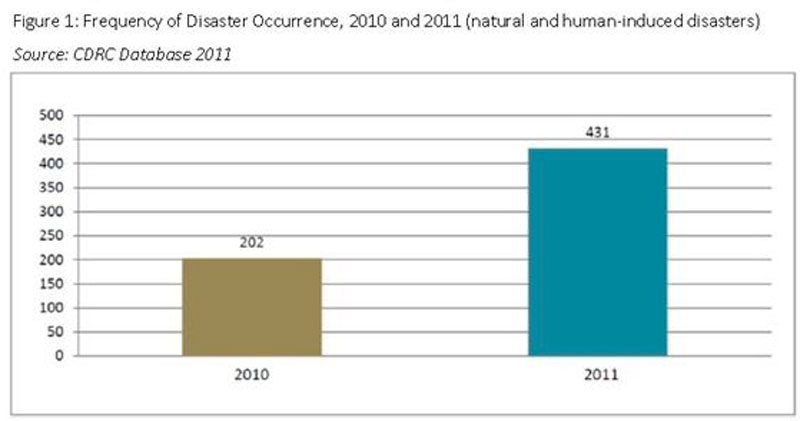 It is precisely these figures that earned the Philippines the top spot in the list of countries with the most number of reported natural disasters in 2011. According to the Emergency Events Database (EM-DAT) The Office of Foreign Disaster Assistance (OFDA) and Centre for Research on the Epidemiology of Disasters International Disaster Database), of the 302 natural disasters that happened worldwide, 33 occurred in the Philippines and 21 in China. Last year, the country was only third on that list with only 14 natural disasters recorded.

The Philippines also placed third in the list of countries most affected by natural disasters in 2011 with 11.7 million people affected. Previously, the country placed only fifth on the list. 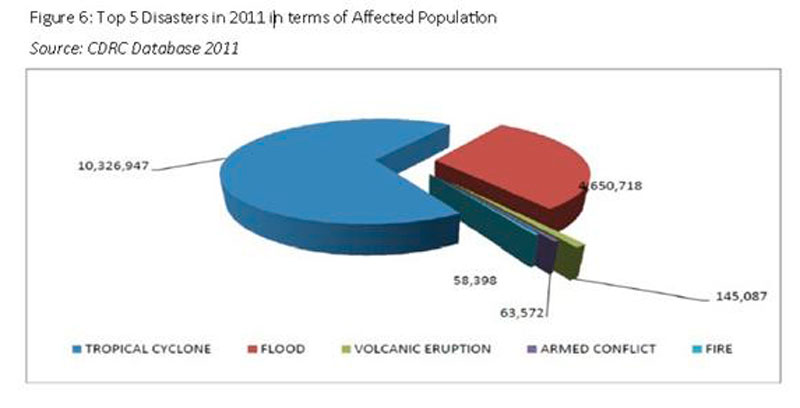 According to Padolina, the Philippines’ ranking came not as a surprise since Tropical Storm Sendong (Washi), one of the worst disasters that hit the country, happened late last year.

In the meantime, when it comes to combined data on natural and human-induced disasters, the CDRC said that 2011 figures far exceeded the 2010 human impact data. It pointed out that even if compared to the 2009 figures, which included tropical storms Ondoy and Pepeng, the number of affected population in 2011 is still much higher at 15.3 million. 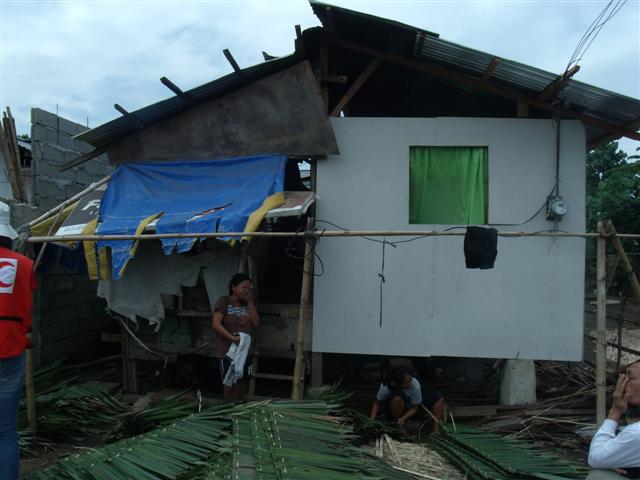 In terms of frequency, flood topped the list with 121 reported incidents, or 28.07 percent of the total number of disaster events
monitored in 2011. This was followed by fire with 98 incidents — majority of which occurred in urban centers, particularly in congested urban poor communities. Meanwhile, earthquakes occurred 78 times, while landslides 66 times, and tornadoes 23 times.

“Tropical cyclones may not have made it to the top five most frequent disasters, but it affected the most number of people. At least 10.3 million people were affected in 2011. The two most destructive tropical cyclones in 2011 are Sendong and Pedring. After the cyclones came massive flooding which affected 4.6 million people. The other disasters were caused by volcanic eruptions, armed conflict, and fires,” Padolina said.

“The challenge for us is to reduce the impact of disasters on our lives,” Padolina said. “No matter how frequent these calamities might occur, as long as we are prepared, we can bounce right back.”