Jonas Burgos may have been forcibly taken away from his loved ones but for five years now, his family and friends have never stopped searching for him. Their memories of him remain vivid, keeping their hopes alive.

MANILA – Jonas or Jay to his family was born on an Easter Sunday, on March 29, 1970. “I was attending Mass when my labor began. In less than an hour, before the Mass ended, I gave birth to him,” Mrs. Edita Burgos recalled. Jonas is the middle child of the five children of Mrs. Burgos and press freedom icon, Jose Burgos Jr.

As a child, Jay was full of energy. “I would tell his teachers to keep him busy or else they’d get into trouble,” Mrs. Burgos said. Jay went to Victoria School Foundation during his grade school.

Jay was called “supervisor” for his habit of roaming around the school. On the first day of classes, he already knew the names of all the teachers. Sometimes, he would tickle the knees of his classmates, moving from one desk to another. 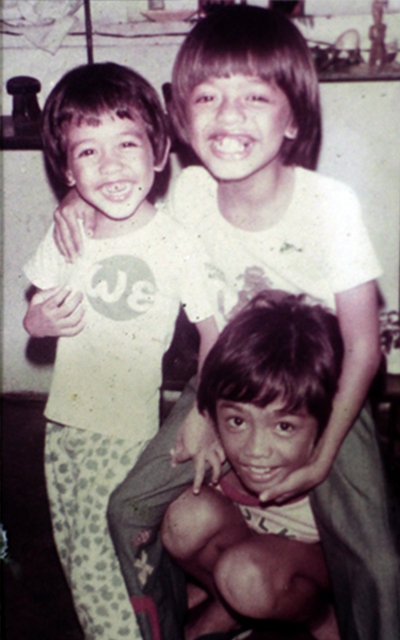 The three boys in the family share a light moment. On the right is Jonas. JL stands beside him and Sonny below.(Photo courtesy of the Burgos family / bulatlat.com)

Asked why he was doing those things, Jay would tell his mother: “Our teacher was saying the same things over and over again.” Smiling, Mrs. Burgos said: “And so, by next school year, he was given the task of erasing what was written on the blackboard. Sometimes, he would erase the text even before his classmates were done copying.”

Jay’s brother, JL, four years younger, recalled how, at one time, Jay stripped off his shorts while they were playing. “He was extremely playful,” JL said. “I remember while we were on an island-hopping in Bicol, he called me and we went inside the hole of a two-storey high boulder. He told me it was a cave.”

Jay’s naughtiness was harmless though, said Mrs. Burgos. He never picked up any fight. In fact, he was the one who would calm down any brewing quarrel among his classmates.
Even as a child, Jay earned the respect of his classmates.

Jay was close to his siblings, especially to the two other boys, JL and Sonny. “We were like peers,” JL said.

When they were little, they would occupy the laundry area and mount a puppet show. The three boys would invite other children, collecting minimum payment for the “show.”

They would take a bath in a nearby river. “The river was clean then or so it seemed to us,” JL said. The Burgos family lived in Tandang Sora, Quezon City in the 80s. “One day, while we were taking a dip, we saw our parents approaching. For fear of being caught, we immersed ourselves in water, hoping that by the time we would emerge, they would have passed us by. When the two of us went up though, our parents were there, standing.”

All the three were active in Boy Scout. The whole family would sometimes go on camping, too. “We would bring food and take them out. During those trips, we would sing together,” Mrs. Burgos said. “Their Daddy was a good singer.”

While Jay was not as good a singer like his father and other siblings, he played the saxophone, harmonica and guitar. He also loves classical music.

When Mr. Burgos put up newspapers critical of the Marcos dictatorship in the early 80s, the whole family was involved.

Mrs. Burgos took care of the financial side. Sonny and Peachy, the older siblings, would help their father edit and proofread the articles; Jay and JL would help by selling the newspapers We Forum and Malaya. “They would sell newspapers at Sto. Domingo Church and Luneta [now Rizal Park in Manila]. Of course, I watched them from a distance. They were still young then,” Mrs. Burgos said.

Jay also developed his love for photography. His parents gave him an Olympus single lens reflex camera. “He had his own dark room,” JL recalled. “Reporters would tag him along during coverage.” 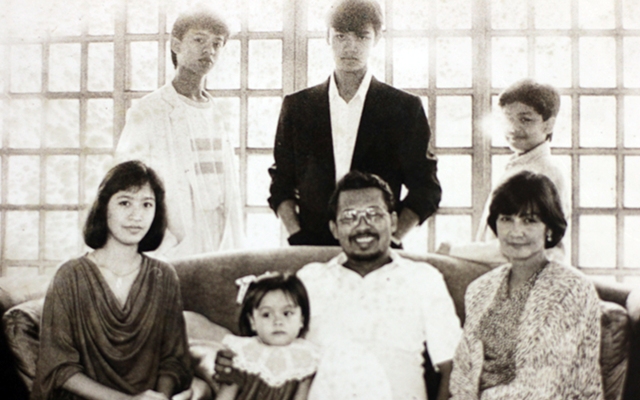 An old family picture, Jonas on the far left, standing.(Photo courtesy of the Burgos family / bulatlat.com)

Love for the farmers

Jay initially wanted to become a priest, Mrs. Burgos said. His uncle, Mrs. Burgos’s brother, Monching, with whom Jay is very fond of, is a priest.

On his first year high school, he went to San Carlos Seminary. He was there for only a year though. “He literally escaped from the seminary. He even tagged along a friend,” JL said.

In college, he took up philosophy at San Beda College. “It was there that he learned about the plight of the farmers,” Mrs. Burgos said. Jay joined Solidarity, a support group for Filipino farmers. It was also at the time when the family moved to San Miguel, Bulacan.

“After the Edsa revolt, Mr. Burgos said he wanted to help the farmers. I left my teaching job in UP [University of the Philippines] and joined him,” Mrs. Burgos said.

“One day, Jay just told us he wanted to be a farmer. And so, he took up agriculture and transferred to BSU [Benguet State University],” Mrs. Burgos said.

Jay stayed in Benguet for ten years. Almost every summer, JL and Sonny would visit him there.

On his graduation, Jay surprised his parents. His thesis on organic rice farming was cited as the best. “A company offered him a lucrative job as a researcher – he did not take it. He said he did not study agriculture just to sit down in an office,” Mrs. Burgos said.

Jay applied all that he learned on their 12-hectare organic farm, directly involving himself in the production. He lived in a small hut, with one bedroom, a receiving area and a toilet.

During this time, JL was already an activist. He joined Ugat Lahi, a progressive group of visual artists at the University of Santo Tomas (UST). “During the 1997 anti-APEC [Asia Pacific Economic Cooperation] rally, I was with the contingent from Metro Manila, he was with the Central Luzon contingent. At around noon, I went up to him and complained that we only had rice and tomato for lunch. He told me I was even lucky because all the farmers had was rice. It was the only rally that we attended together.” JL said.

Jay later decided to extend his organizing work among the farmers in other areas of the province.

Mrs. Burgos admitted she was apprehensive over Jay’s decision. “I fear for his safety. My husband told me, ‘We have brought them up like that, let them decide for themselves.’”

Jay was never really away, Mrs. Burgos said. He would visit his parents every now and then. “Before or after my birthday, he would turn up. It was my habit to prepare his favorite dishes and put them in a freezer so that by the time he comes, he would have something to eat,” Mrs. Burgos said. “He loves to eat. Whether it is lechon (roasted pig) or instant noodles, he would savor it.”

“Whenever he arrives, he would touch my cheeks and kiss me on the forehead,” Mrs. Burgos said. “He always had orchids for me.”

JL, who was not in Bulacan then, would receive handwritten letters from Jay. “He would write me about his experiences. On my birthday, he would always greet me. He never failed.”

Mrs. Burgos said his daughter, his nieces and nephews miss him so much. 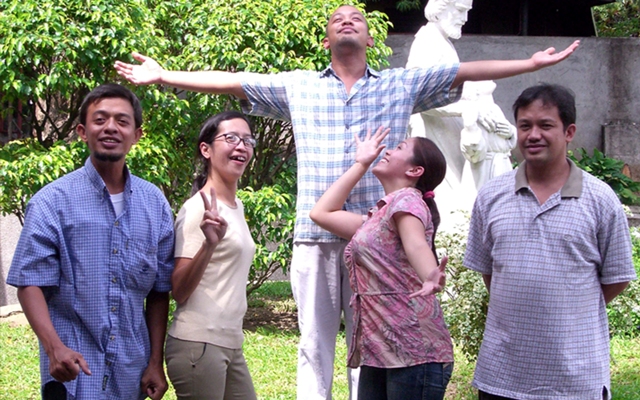 The five children of Mrs. Edita Burgos and Jose Burgos Jr., Jonas on the left.(Photo courtesy of the Burgos family / bulatlat.com)

Mrs. Burgos said Peachy’s children, whom Jay took care of for a while, remember their Tito Jay as a funny person. “They describe him as noisy, lively person.”

When Jay was abducted, his daughter was less than two years old. “She has recollections of her father. Before he disappeared, he had the chance to spend time with his wife and his daughter,” Mrs. Burgos said. “He borrowed my car and they went on a trip. Her little girl has memories of him.”

One time, while Jay’s daughter was sitting on the lap of her grandmother, the child suddenly leaped to her feet. On the computer monitor, she saw the reflection of a man who came to the door. “It was my niece who had almost the same body build as Jay. She said, ‘It’s Daddy!’ When she realized it was not him, she went back to me and said, ‘Ay! It’s not Daddy.’ I could not help but cry,” Mrs. Burgos said.

Today, the day Jonas was taken by suspected state security forces five years ago, his family and friends will once again reminisce moments they had shared with him, each one so precious and so real as though he has never gone missing.