This Labor Day, the workers and the poor will take President Benigno “Noynoy” Aquino III to task for failing to respond to their calls, making the hunger and poverty situation in the country even worse, and exceeding even the previous government’s puppetry to the US.

MANILA – Since President Benigno “Noynoy” Aquino III became president, he has engendered criticisms that boil down to “Anybody home?” and “Noynoying.” The first captures the impression that he is frequently out of the loop, and the latter, a play on his name, has come to connote ‘doing nothing.’

The latter has gone viral in the Philippines and abroad as various groups’ criticisms of Aquino’s inaction on peoples’ issues seemed to have hit a nerve.

As example, the labor center KMU (Kilusang Mayo Uno) cited the president’s refusal to hike wages by a significant amount, Aquino’s refusal also to save workers from contractual employment schemes as shown in the case of the Philippine Airlines, his government’s failure to stop the violent demolitions of urban poor communities, the persistent oil price hikes, and the continued mockery of land reform.

These, the labor center said, prod “the workers and the poor this Labor Day to take President Benigno “Noynoy” Aquino III to task for failing to respond to their calls, making the hunger and poverty situation in the country even worse, and exceeding even the previous government’s puppetry to the US.” 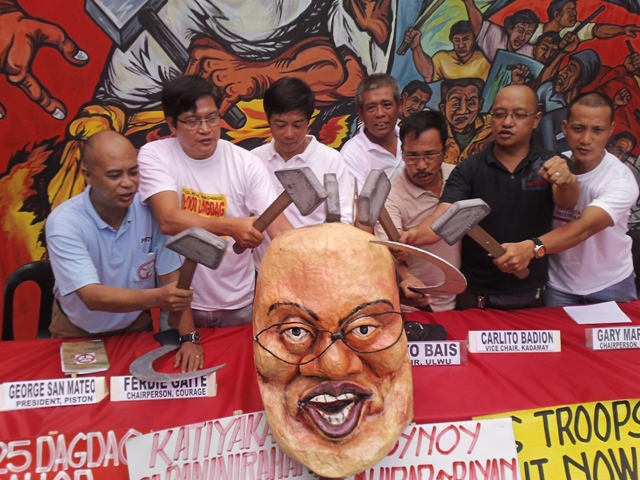 Leaders of progressive labor and transport groups, including the leaders of urban poor organizations and public sector employees, announced in a press conference Friday that they are aiming for a 30,000-strong mobilization in Metro Manila and more than a hundred thousand-strong mobilization across the country.

In another development, the government-backed Trade Union Congress of the Philippine and the Free Filipino Workers formed an alliance called “Nagkaisa” which promises to conduct mass actions, “if needed,” to oppose price hikes.

‘A day of reckoning’

Calling this year’s Labor Day “a day of reckoning,” the KMU called on Filipinos “to give vent to their frustrations and anger at the Aquino government and join our protests on Labor Day.”

The labor center said people “have every right to take Aquino to task for failing to respond to their calls and making their situation worse.”

Among the Aquino presidency’s sins against the workers and the people, the workers’ organizations are particularly angered by Aquino’s freezing wages while allowing prices of basic goods including oil, water, electricity, foodstuff, medicines, housing and tuition fees to rise unabated.

As such, on the days leading to May 1, workers have filled up their calendar with schedules of protest actions to be held in front of offices and depots of oil companies, for example, and the regional wage boards.

“Because the regional wage boards are structurally programmed to refuse granting a significant wage hike, we have been calling for their abolition. Even the highest amount granted by a regional wage board (P36) will not suffice to help workers cope with high prices at present,” said Lito Ustarez, vice president of KMU.

The labor center finds it “deplorable” that the country’s wage boards have not only refused to recognize the record levels of oil prices this year as a supervening event calling for wage hikes earlier than the one-year ban. “They are still holding consultations on what workers already consider as obvious fact –that there is a need to hike wages,” Ustarez said.

Most labor groups in the country have expressed a desire for Congress and not the regional wage boards to act on their calls for a wage hike. “Workers need a wage increase that’s substantial, not measly, to cope with the prices of basic goods and services that have been soaring not only this year but in recent years,” Ustarez explained.

The labor groups also condemned “Aquino’s subservience to the US” as worse than that of Arroyo. “He is pushing for expanded US military presence in the country and greater US military intervention into issues that are internal to the country,” said Elmer “Bong” Labog, chairman of KMU.

“The workers and the poor are hungrier and poorer and are fed up with Aquino’s empty promises,” said Elmer “Bong” Labog, chairman of KMU. Since experiences under Aquino have showed that workers “cannot rely on it to improve our situation,” Labog urged his fellow workers to fight this government’s policies, which, he said, are slowly but surely being exposed as “anti-poor and pro-elite.”