You Are Here: Home → 2012 → May → 2 → On Labor Day, workers take Aquino to task for pushing working people deeper into poverty

Aquino has granted only “measly wage hikes, promoted contractualization even more, made demolitions of urban poor communities more brutal, and colluded with the oil cartel.” – KMU

New labor coalition got nothing from Pres. Aquino but a labor day breakfast

The fight for security of tenure continues

MANILA –Some 100,000 working people and youth marched simultaneously in various cities of the Philippines on Labor Day, May 1. In the capital, an estimated 20,000 marched under the scorching sun and sudden downpour late in the afternoon. All over the Philippines they uniformly condemned, in various languages, the Aquino government’s inaction on people’s hunger and poverty. In fact, they blamed the government of President Benigno “Noynoy” Aquino III for pushing the working people deeper into poverty.

Labor leaders took turns lambasting Aquino’s supposed programs for helping the poor as bogus and palliative, not offering real solutions or at worst, even contributing to their worsening poverty.

“Pres. Aquino did nothing to lessen hunger and poverty among workers and the poor,” said Elmer “Bong” Labog, chairman of labor center Kilusang Mayo Uno that led the bigger May 1 rallies all over the Philippines. Labog said Aquino has failed to heed the demands of workers and poor people who suffered for more than nine years under the past administration of Gloria Macapagal-Arroyo.

Arroyo, who preceded Aquino as president, had given the lowest real wage hikes to workers on record, according to independent think tank Ibon Philippines. Also under Arroyo’s watch, bloody dispersals of picketlines and strikes happened, giving rise to the now infamous “Hacienda Luisita massacre” and the killings of Nestle´ union leaders. 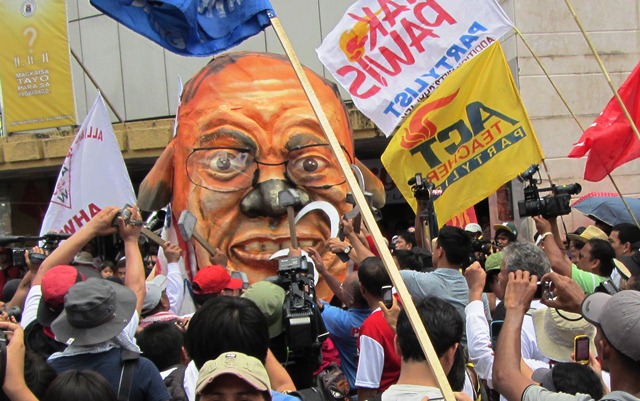 Aquino’s effigy as a US’ pitbull (Photo by Marya Salamat / bulatlat.com)

Aquino had wooed Filipino voters with promises of “change” and of being different from Arroyo. But two years into his term, he has proven “that he is no different from Gloria Macapagal-Arroyo when it comes to economic policies,” said Labog. He explained that Aquino has granted only “measly wage hikes, promoted contractualization even more, made demolitions of urban poor communities more brutal, and colluded with the oil cartel.”

Government employees, teachers and health workers, including their family members who joined the rally, scoffed at Aquino’s “surprise package.” 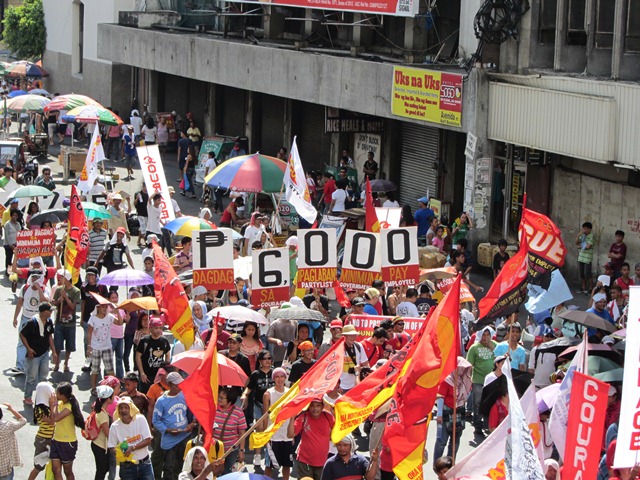 “Obviously we are dismayed,” said Ferdinand Gaite, national president of government employee confederation COURAGE. The public sector leader said the Aquino government’s “treatment of its own employees is reflective of its seeming prejudice against workers.”
Aquino has announced ahead of Labor Day the one-month advance implementation of the last tranche of the Salary Standardization Law 3 or SSL 3. But this failed to appease nor forestall the members of Courage from attending the Labor Day protests.

“It’s a measly P713 ($17) a month increase for the minimum pay. Considering the rate of inflation, it’s not even enough to make up for the lost value of our pay,” Gaite said.

Courage told Aquino not to brag “about something that is not even to the credit of his administration.” SSL 3 was passed in 2008 under the Arroyo administration. It mandates a four-year staggered increase for state employees. However, it is highly criticized for granting bigger pay for those occupying higher government posts while providing measly increases for rank and file workers.

Courage said that even if the public sector employees’ minimum pay increases to P9,000 ($214) next month, after deductions, “it is still way behind even the government’s conservative estimate of cost of living which now stands at P29,000 ($688).” The need for a P6,000 ($142) increase remains urgent, said Gaite.

For private sector employees, the wage hike they had been pressing the government to implement remains the P125 across-the-board nationwide wage hike that is still pending in congress. Although the proposal is gaining supporters, President Aquino has shot it down recently, using what many critics said as “flawed computations.” Instead, the regional wage boards and the labor department started approving “paltry” increases.

Bayan Muna Rep. Teddy Casiño asked Aquino during the May 1 rally why he is too protective of capitalist profits, as manifested by Aquino’s outright rejection of a P125 ($2.9) wage hike. He even tried to discredit it by bloating the cost of the wage hike. Casiño said the amount, when given to poor workers, would have spurred the economy as workers would likely spend it on basic goods and services. “Whereas if Aquino just let the capitalists continue pocketing those trillions of pesos, it would only go to more luxury products.”

Aquino a US pit bull

This Labor Day rally, the marchers in Manila were preceded by the 10-foot effigy of Pres. Benigno “Noynoy” Aquino III portrayed as a pit bull, which they say symbolizes Aquino’s relentless subservience to US dictates.

Created by Ugat Lahi Artist Collective, a group of visual artists known for creating effigies of Philippine presidents shown in various protest actions, this pit bull Aquino drew chuckles. When the pit bull effigy came into their view after turning to Recto ahead of the marchers, it even elicited some smiles from policemen deployed in the area. As a US running dog sporting guns and other military paraphernalia, Aquino’s effigy was burned at Mendiola at the start of the Labor Day main program there.

The KMU also unveiled a huge mural that served as backdrop of the International Workers’ Day 2012 attended by tens of thousands of working people in Plaza Miranda and Mendiola.

“The mural is in theme with Labor Day 2012 commemoration,” said Labog. The KMU has dubbed it a day of reckoning and struggle against the US-Aquino regime. Their mural depicts as avengers the “basic alliance of workers, peasants and other toiling masses.” They were shown here with their “united resistance against the Aquino government,” which KMU describes as chief representative of the few ruling elite and the US’ most trusted ally in the Asia-Pacific.