The assembly carried the theme, “Strengthen the unity of migrants to advance the struggle for rights and welfare in the midst of the worsening economic crisis, deportations and the criminalization of migrants in Europe.” The delegates said that through the IMA, their organized strength, voice and visibility will be enhanced.

During the assembly, it was established that IMA Europe will be led by a seven-person committee that will ensure that the programs of the alliance will be carried out effectively and that the international movement reaches out to more migrants across the continent.

Elected members of the IMA Europe committee are Luz Miriam Jaramillo from Colombia of Comitato Immigrati-Italy as chairperson; Teddy Dalisay from the Philippines and of Umangat 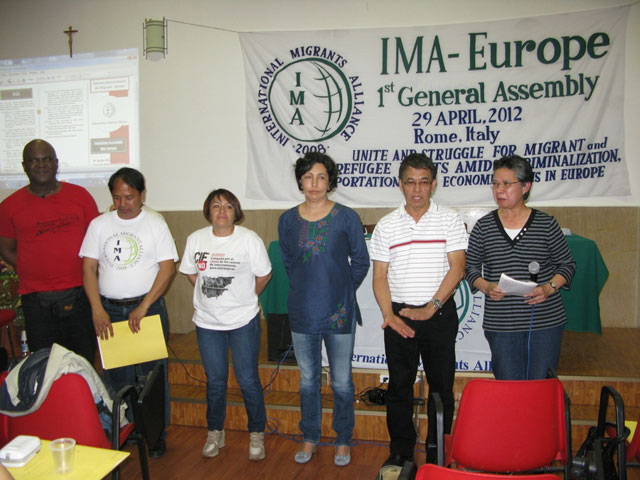 Migrante-Rome, as vice chairman; Grace Punongbayan from the Philippines) and of Migrante Europe-Netherlands as secretary general; Manuel Sarmiento from the Philippines and of Migrante-Austria as treasurer; and members Bye Uba from Senegal Marcia Quizpi from Ecuador and of Frente Unido de Inmigrantes en Espana-Spain, and, Osaren Igbinoba from Nigeria and of the Voice Refugee Forum- Germany.

Punongbayan explained that the IMA is a broad anti-imperialist alliance which defends and promotes the rights of migrants, immigrants and refugees in all parts of the globe.

“It has a membership of 108 organizations of various nationalities in 25 countries and was founded in June 2008 in Hong Kong. Since then, it has spearheaded various international campaigns advancing migrant and refugee rights and welfare, and the convening of the International Assembly of Migrants and Refugees (IAMR), in Manila in 2008, in Athens in 2009, and in Mexico in 2010, as counter to the government-led Global Forum on Migration and Development (GFMD),”she said.

The migrants and refugees, who assembled at the Casa per Ferie Sacro Cuore in the Italian capital, unfurled a mural crafted by a young Filipino refugee in the Netherlands. They also offered candles, flowers and a one-minute silence for migrants and refugees who died in detention, deportation and on the borders of Europe.

According to reports of the Amsterdam-based anti-racist group United for Inter-cultural Action, there have so far been 14,000 recorded deaths of people trying to cross Europe’s borders, particularly those crossing the Mediterranean Sea into Europe. In 2011 alone, 1,500 deaths were recorded.

Punongbayan said its European section fought against the anti-migrant policies of the US and EU governments. 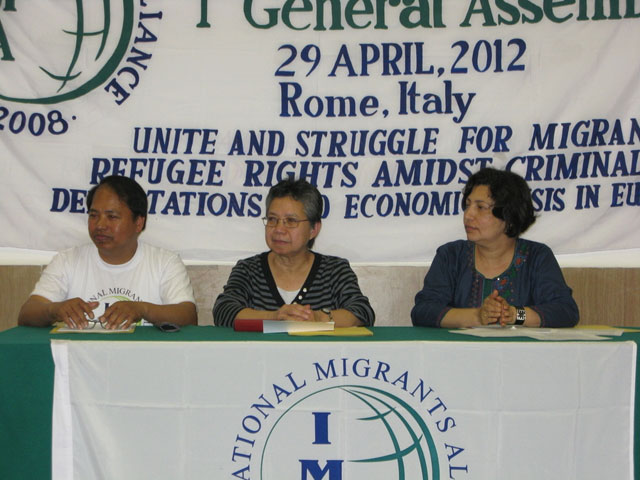 “We will continue to fight for justice for the working people, the unemployed, the pensioners and the poor. In our home countries, we fight for a social system that creates jobs, where family members are not forced to migrate and look for work abroad as a means of survival. In so doing, we fight for a world where there are jobs for the jobless, homes for the homeless, food for the hungry, and justice for all,” she said.

The whole-day assembly was highlighted by animated and passionate discussions on the general situation of migrants and refugees in Europe, which is host to some 72.6 million migrants, and the particular situation in several European countries such as Spain, Italy, Netherlands, Austria, Denmark, Belgium and Germany.

The delegates spoke about their exploitation, threats of expulsion, loss of jobs, the denial of their right to access social services, the isolation of refugees in camps and asylum centers where they were denied social contact with the local people. They also exchanged accounts of how they were denied the right to free movement; stories about deportations, tragic deaths of relatives, co-migrants and refugees, and the impact of US and European-instigated wars for profit and economic expansion such as racism and discrimination.

The delegates adopted the IMA constitution, bases of unity, general program of action, and resolved – to break the silence on the inhuman treatment of refugees, particularly in Germany; to call on the Italian state to locate Karim Mbarki, a missing son of Tunisian parents, who disappeared while attempting to seek safe refuge in Italy; to call for democratic reforms in Ukraine; and, to actively engage other migrants and advocates during the upcoming Alternative Forum being organized by the IMA parallel to the World Social Forum on Migration to be held in Manila in November this year.

The delegates also vowed to launch this year a vigorous campaign against the European Union’s “Return Directive” that seeks to criminalize some 12 million undocumented migrant workers in Europe and deport them back to their home countries.