Farmworkers are urging Mr. Alfonso Yuchengco, owner of RCBC, to hound the president and his relatives instead, “because they are the ones who cheated him by luring his bank into an onerous deal.”

MANILA – Last month, Eric Trinidad, 17, got injured when a policeman used the butt of a M16 rifle to hit his legs after he and other farm workers in Hacienda Luisita tried to block the “incursions” of the Rizal Commercial Banking Corporation (RCBC) into their farm plots. At the time, RCBC was fencing off the farmworkers’ farm plots in the renowned hacienda in Tarlac, which was ordered by the Supreme Court to be distributed to the tillers.

RCBC is claiming ownership of 182 hectares of the hacienda. It was reportedly given to RCBC as debt payment of the Hacienda Luisita Inc. (HLI), a corporation formed by the Cojuangco family to manage Hacienda Luisita, after it postponed actual land distribution through stock distribution since the 80s. Farmers groups led by the farmworker-based Unyon ng Manggagawa sa Agrkultura (UMA) and its Tarlac chapter said the HLI “gave” RCBC 182-hectares just weeks after the November 16 Hacienda Luisita massacre in 2004.

The RCBC, said Eric Trinidad, is currently trying to fence off its supposed land in the hacienda, in the process destroying some of the farmworkers’ planted vegetables. With Eric, another minor was “arrested” and jailed briefly last month when they tried to block the RCBC’s demolition efforts. He told bulatlat.com that their elder fellow farmers who were also taken to the police station had been jailed for two days. Now, five are slapped with legal cases.

“Farmworkers are being charged with forcible entry, malicious mischief, and other trumped-up charges, just because they are defending their farm plots and crops from the demolition team hired by the RCBC,” said Joseph Canlas, leader of the Alyansa ng Magbubukid sa Gitnang Luzon, in a rally staged in front of an RCBC branch in Queson City this Monday (May 7, 2012). 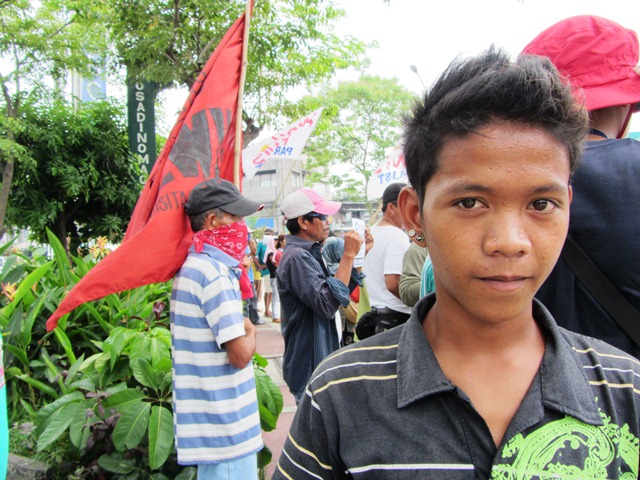 Canlas railed at the RCBC for sending “fake negotiators” to the farmers’ groups. He also denounced the RCBC for pushing, as condition in withdrawing the charges it had slapped on farmers, the demolition of farmers’ huts in the contested land.

RCBC not an “innocent purchaser” but a Cojuangco-Aquino accomplice

Questioning the legitimacy of RCBC’s claim on a portion of Hacienda Luisita, the farmworkers have started tilling the land since last year. The farmers’ groups have also urged the Department of Agrarian Reform (DAR) to “release a status quo order as a temporary legal remedy restraining RCBC to make any actions such as fencing and filing of baseless criminal complaints.”

The farmworkers’ groups said they have a strong case against RCBC. “The bank management for the nth time is never an innocent purchaser on its transaction with the Cojuangco-Aquino’s. In fact, they acted as accomplice by allowing themselves to be used by the president and his relatives in further shrinking the lands that should have been distributed to the farmworkers,” said Rodel Mesa, secretary general of UMA.

In the Supreme Court hearings on the Hacienda Luisita case last year, justices had also grilled the RCBC lawyers about why it entered into such a transaction with the Hacienda Luisita Inc., over lands which the bank could not have failed to hear as under an ongoing dispute.

Rodel Mesa said the RCBC could not have been “an innocent purchaser when they know for a fact that the land was locked in a legal brawl since the 1950s.” 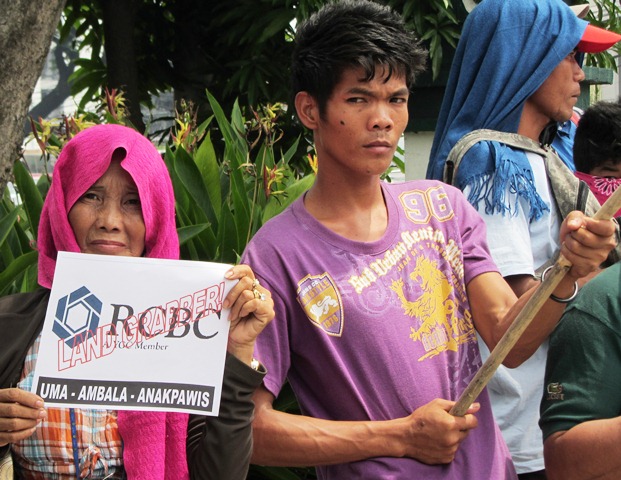 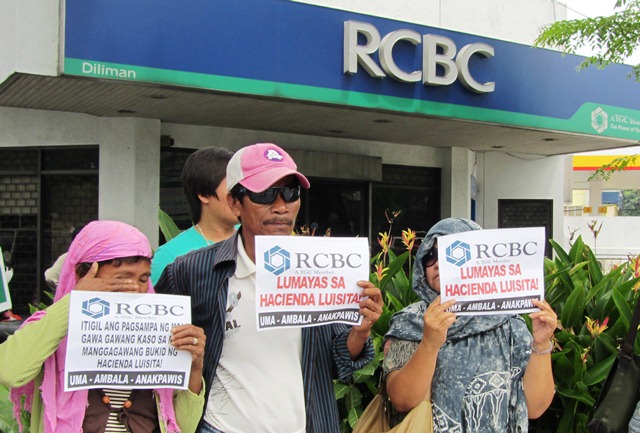 RCBC private security guards and hired demolition teams have been trying to fence off the contested parcel of land in Hacienda Luisita, resulting in violent confrontations with farm workers. The latest stalled fencing off happened shortly before the March 27 inspection of the said land by a team composed of UMA, Ambala, Sentro para sa Tunay na Repormang Agraryo (SENTRA) with representatives from DAR and the Municipal Agrarian Reform Office.

In August last year, RCBC filed a grave coercion complaint against 22 farmworkers, followed by a robbery case in March this year. Included in the new criminal rap is Ambala’s chairman Felix Nacpil Jr.

For Eric Trinidad, there is no letup in threats to their farming and livelihood until they can be rest assured that their farm plots would not be demolished and they would not be evicted from the land. He told bulatlat.com that his parents are too old already for hard farming. So it is now their turn, the children, to work their farm plots.

The farmers’ groups said the 182-hectares can make a big difference, because if added to the 4,900-plus hectares for distribution, it would benefit a hundred more farm workers with 7,000–sq. meter per beneficiary. DAR has yet to share its findings after its ocular inspection with the farmers’ groups last March, but the farmworkers’ groups hope the DAR can see right through the supposed ‘innocent purchaser’ argument of RCBC.

In the farmers’ protest in front of an RCBC branch near the Quezon City Hall, they brought a letter to the Yuchengco family, owner of the controlling stake in RCBC, and to RCBC itself, asking them for a “decent negotiation.”

The farmers’ groups also asked the RCBC depositors to support their mass actions, which they say they will continue in front of RCBC branches and even at the houses of the Yuchengco family.

“It is alarming, what the RCBC is doing with its depositors’ money,” said Canlas of AMGL. He added that it is the depositors’ money the RCBC has used to lend to the Cojuangco-Aquino family, and now, on the basis of this, the bank is using the money to grab lands from long-time peasant-tillers of the hacienda lands.

Farmers said they would not back down against RCBC’s renewed legal offensives against them. “We will face their criminal complaints with series of mass protests,” said Rodel Mesa, citing how the farmworkers are the “legitimate owners of Hacienda Luisita and not the Cojuangco-Aquinos nor RCBC. Mesa urged Mr. Alfonso Yuchengco to hound the president and his relatives instead, “because they are the ones who cheated him by luring his bank into an onerous deal. He should just give up his immoral claims on the 182-hectare Hacienda Luisita land.”