You Are Here: Home → 2012 → May → 8 → Migrante sounds alarm against illegal deportation of OFW trade union leader from South Korea

In 2010, Catuira was issued a G1 visa (miscellaneous visa for those involved in legal proceedings) as a replacement for his E9 (working) visa because a then ongoing case he filed against Korean immigration authorities. He won the case in the lower court, but Korean immigration did not reinstate his E9 visa, prompting him to file an appeal. Catuira’s case is now being heard in the higher court. His G1 visa was valid up until May 2012.

Based on reports, Catuira arrived at the Incheon Airport from the Philippines via flight 5J-194 last April 30 at around 9:30 p.m.. Upon arrival, he was immediately accosted and questioned by immigration officials and was made to wait in an immigration room for several hours. 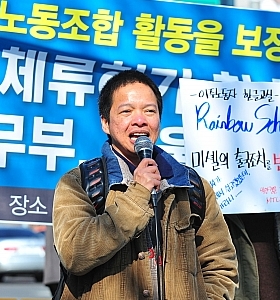 Finally, after hours of negotiations, Catuira was forcefully and physically dragged to board a plane back to the Philippines despite his pleas that he be allowed to file an appeal after the May 1st holiday. He arrived in the Philippines on May 1 aboard Cebu Pacific flight number 5J-190.

According to a report posted on the South Korean web newsmagazine Hankyoreh by reporter Park Tae-woo, Catuira had already won his case against the Seoul Immigration Office in September 2011. The Seoul Administrative Court said the court concluded that there was no conclusive evidence to indicate that Catuira had received a residence permit under false pretenses or violated immigration law.

It also said its decision that “MTU officials have been forcibly deported in the past, and there are concerns that the Seoul immigration office’s decision in this case was motivated by the plaintiff’s labor union activities.”
The Seoul Immigration Office appealed the first trial’s ruling when Catuira returned to the Philippines in January 2012 to visit his family.

In reaction to the controversy, Hankyoreh reported that a Justice Ministry official in South Korea said Catuira was denied entry by law because he was suspected of acquiring employment under false pretenses. “We had no choice but to deny him entry until the court confirmed the verdict,” the official said.

The MTU, for its part, has already decried what was done to its chairman, saying that the ministry’s reasoning was faulty.

Jung Young-sup, secretary-general of the Migrant Worker Campaign Support Association told Hankyoreh that given that Catuira’s visa is set to expire on May 7, he was unable to attend the trial, and the suit may end up being dismissed.

Hankyoreh also cited the statement of the Combined Action to Eliminate Discrimination Against Migrant Workers and Observe Human and Labor Rights calling the entry refusal “retaliation for Catuira’s fight against the government’s anti-migrant policies and racial discrimination during his stay in South Korea.” The statement also blasted the government for “deporting Mr. Catuira on Labor Day, a day of international solidarity for workers the world over.”
Violations against human rights

Migrante International chairman Garry Martinez said that what the Korean immigration authorities did to Catuira constituted violations against his human rights.

“They did him physical harm when they dragged him to the plane, and evidently they also caused severe emotional and mental stress. We have every reason to believe that his black-listing is politically motivated,” Martinez said.

Martinez said that as president of the MTU, Catuira has been at the forefront of work to address violations of the rights of migrants in South Korea.

“He has spoken out against restrictions placed on migrant workers’ freedom to change workplaces and other problems under the Employment Permit System (EPS) that lead to human and labor rights violations. He has also vocally criticized the South Korean government’s policy of immigration raids, crackdowns and deportation of undocumented migrant workers, which has caused injuries, deaths and other rights abuses,” he said. 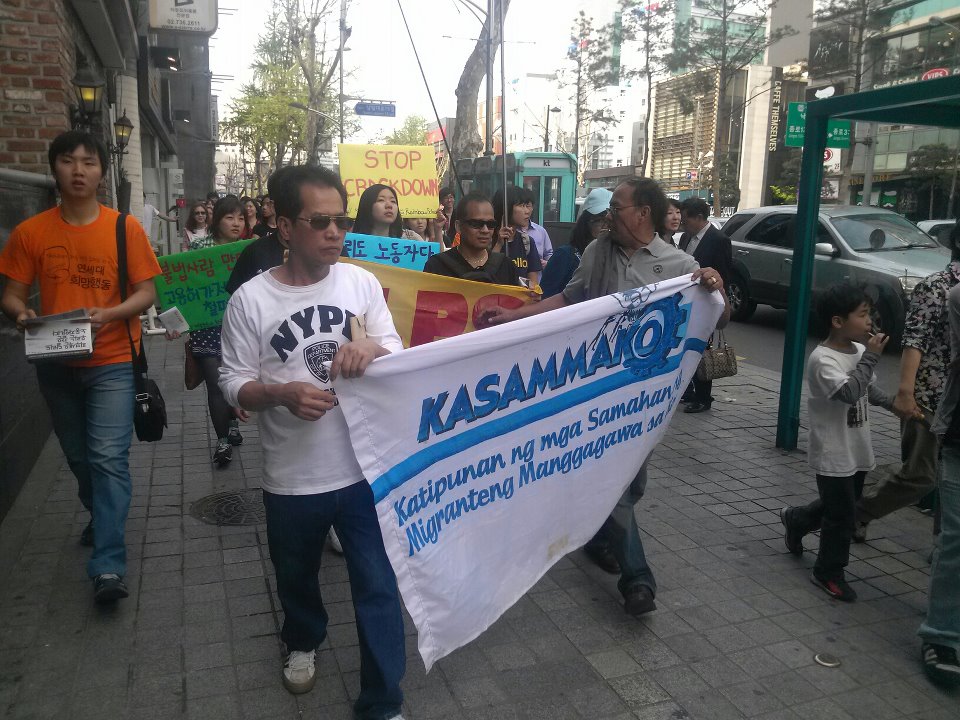 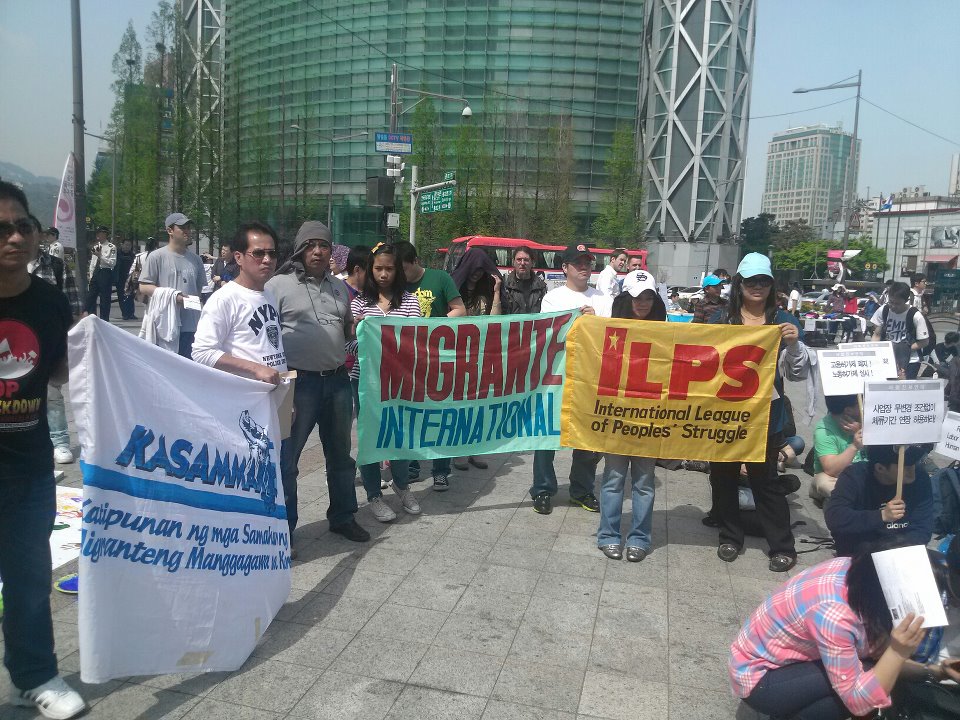 In 2010, Catuira led a sit-in protest in opposition to the government’s concentrated crackdown on undocumented migrant workers carried out in preparation for the G20 Summit that was held in November that year in Seoul.

Catuira then carried out a month-long hunger strike. He also participated in protests and other activities organized by MTU and other migrant rights organizations in response to the death of a Vietnamese migrant worker, who fell from a second story window while fleeing immigration officers during a raid. These activities included a protest visit to the Immigration Service, during which immigration officers told Catuira that, as a migrant worker, he had no right to raise a complaint with them.

“We support Catuira’s case against South Korean immigration authorities. We also call on the Philippine government to immediately release a statement of condemnation and file a diplomatic protest against this injustice against a Filipino national and migrant trade union leader. This is yet another result of the South Korean government’s criminalization of and unjust crackdown on migrant workers,” Martinez said.

Migrante International and its allied migrant organizations in South Korea have long been supporting the struggle of the Filipino community and migrant communities of other nationalities in South Korea against worsening attacks of the South Korean government against undocumented migrant workers. The crackdown is a result of the government’s labor policy, the Employment Permit System (EPS). Martinez said the EPS has been proven flawed and anti-migrant and should be scrapped.

The Philippine and Korean governments signed an agreement on the EPS in 2006. Since then, the rules concerning the status of some 500,000 workers from the Philippines, Vietnam, Thailand, Mongolia and Indonesia deployed in South Korea have been under the EPS. The EPS basically allows Korean employers who have failed to hire local workers to legally employ migrant workers.

Martinez, however, pointed out that the EPS has failed to ensure the benefits and protect the rights of migrant workers.

“Instead, since its implementation seven years ago, cases of labor and human rights violations against OFWs and other migrant workers continue to run rampant,” he said.

One of the objectives of the EPS was supposedly to increase transparency of sending and receiving workers, and consequently protect migrant workers’ rights and prevent discrimination. Martinez argued that for all the EPS seeks to accomplish, there appears to be no monitoring system, and companies and employers violate migrant workers’ rights without being held accountable.

“More Korean employers have been hiring undocumented migrants to be able to evade compliance on minimum wages, benefits and leaves. As a result, undocumented workers are being targeted by the Korean government’s violent and intensified crackdowns,” he said.

Martinez, himself an undocumented OFW in South Korea for 12 years before he was deported to the Philippines, said the present global economic crisis has unleashed so-called “protectionist measures” that, in practice, constitute crackdown operations and harsher immigration policies that bear down on irregular or undocumented workers, at the expense of their human rights.

“Undocumented migrants, who inevitably provide the solution to labor shortages or the clamor for cheap labor in host countries, are marginalized and exploited. They are less able to assert their claims and are more vulnerable to abuses because of their ‘illegitimacy,’” he said. “Being undocumented is never reason to be stripped of one’s fundamental human rights.”

According to records of Migrante International, the number of undocumented Filipino workers deployed in different countries has reached approximately 900,000 in 2007.

“This number has continued to increase over the years, especially in the light of continued unemployment and landlessness here in the Philippines. The growing number of undocumented OFWs worldwide is indicative of the ongoing crisis of forced migration and systemic economic crisis in the country,” Martinez said.

The migrant rights leader called on the Korean and Philippine governments to ensure the protection of undocumented OFWs in South Korea and to work for their legalization.

“Our call is for legalization, not criminalization. Human rights, regardless of status, should not be violated. Undocumented migrants worldwide contribute greatly to the economies of their host nations and to the domestic economy as well in terms of their remittances,” he said.