You Are Here: Home → 2012 → May → 19 → Actress Jodi Sta. Maria joins Migrante in demanding justice for OFW killed in Mongolia 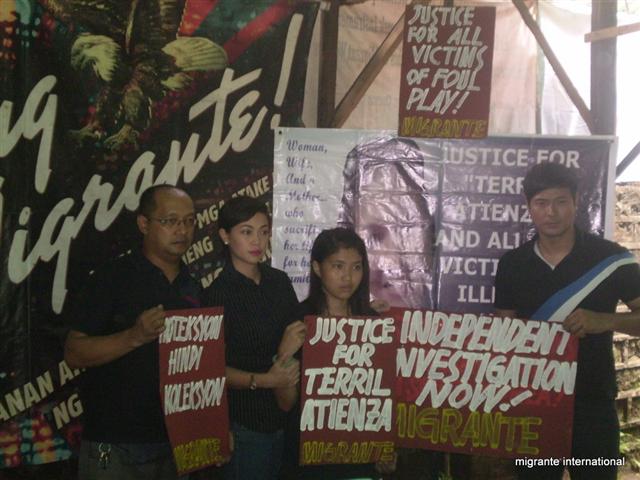 When Atienza’s remains were flown back to the country on December 9, it was discovered that her heart was missing and her entire body bore various bruises and burns. In an autopsy report made by the National Bureau of Investigation’s (NBI) Medico-Legal Division, it was stated that the OFW’s other internal organs were “sectioned with missing portions.” A cloth rag was also extracted from inside her body.

In a press conference, the two actors joined Atienza’s family who again called on the Benigno Aquino III government to help them find justice for the killed 34-year-old mother of four. Sta. Maria and Dizon are lead actors in the upcoming movie, “Migrante (The Filipino Diaspora)” which is directed by director Joel Lamangan and written by Bonifacio Ilagan.

Sta. Maria said their new film is “More than anything else, an advocacy film which tackles issues confronting OFWs such as the abuse and exploitation they suffer under employers and the neglect of the government for their welfare. 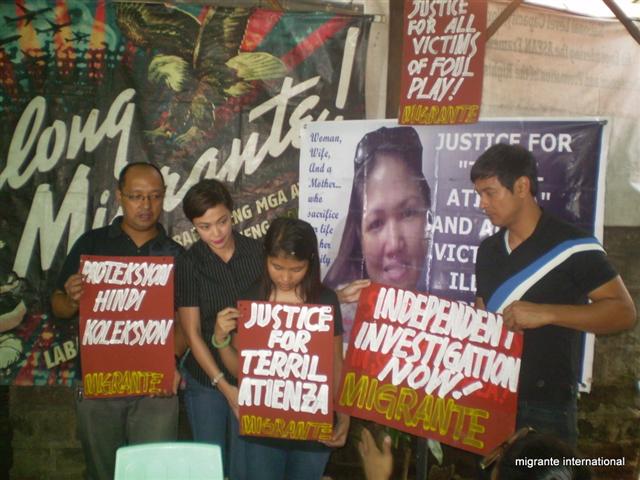 “It was while making the movie that we were able to work closely with Migrante International and witness first-hand the plight of our OFWs,” she said.

The young actress said that being a mother herself, she was moved by Atienza’s story. In the film, Sta. Maria plays a mother and an abused OFW in Israel.

“This is not just a film that’s based on the imagination merely; it’s a film that derives its heart and soul from the true experiences of our OFWs in various countries all over the world. The movie, I have no doubt, will serve as an eye-opener for many of us,” she said.

Undocumented worker in Singapore and Mongolia

According to Migrante International, Atienza first worked in Singapore as a domestic worker in January 2010. By June 2011, she had already told her family that she wanted to return to the Philippines. Her request was denied by the recruitment agency that hired her, saying that she had to finish her two-year contract first.

After a year and a half in Singapore, the same agency deployed her to Mongolia. It was there that she died under mysterious circumstances.

In Mongolia, Atienza worked for a certain Sergelen Davaakhu whom she said in her various letters to friends and family was the Consul of Austria in Mongolia and a son of a former Mongolian Prime Minister.

Atienza said that the man was often drunk and held nightly rowdy parties in his house where she worked. She was forbidden from using her mobile phone and laptop. After four months of working for Davaakhu, she was only able to send US $184.37 to her family. On November 13, 2011, she called her 16-year old daughter Nyrriel and told her that she was coming home because her employer had not paid her wages for three months.

Ten days later that same month Nyrriel received a call from her mother’s friend and fellow OFW Karen Cruz. Cruz reportedly said that she was worried because Atienza failed to show up for an agreed-upon meeting they had. Cruz also said on that same day, Atienza’s employer called her and said that Atienza would not be able to meet with her because she was not feeling well. 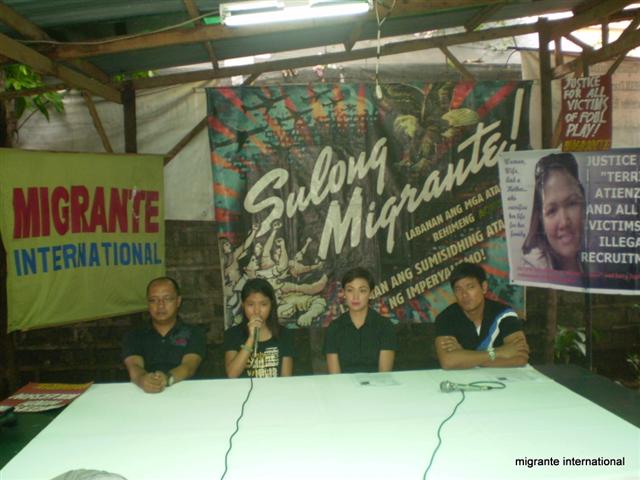 What made the entire matter most upsetting for the family even then was that two days previous to Cruz’ call, Atienza’s agency here in Manila got an email from her employer that her body was already in the morgue.

Initial autopsy reports from Mongolia indicated that Atienza died of “severe intoxication from an unknown source.” A conclusive autopsy report from Mongolia is still pending following results from laboratory tests conducted on her body. Her family, however, took Atienza’s remains to the NBI for a second autopsy. The second autopsy report was vastly different: it said that the cause of death “probably secondary to hypertensive cardiovascular disease due to a stabbing incident.”

According to Migrante International, there was foul play in Atienza’’s death.

Migrante International chairperson Garry Martinez said most of the cases his group handles when it comes to mysterious deaths have women domestic workers as victims.

“Women domestic workers are doubly exploited. They are the most vulnerable to trafficking and abuse. They are forced to work under slave-like conditions because of their defenselessness and the very nature of their work environment,” he said. 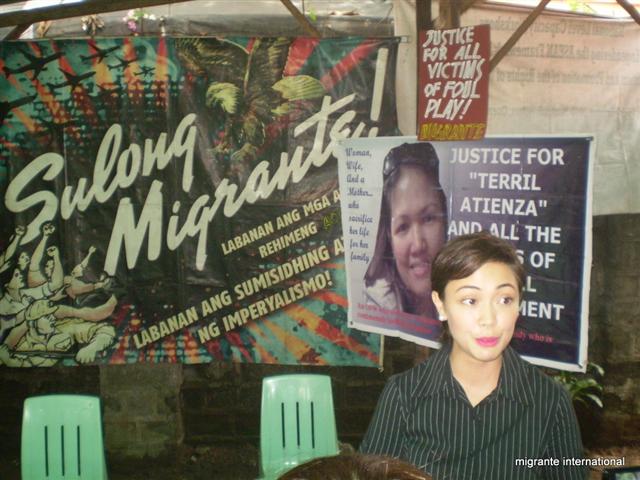 Martinez also said these abuses become compounded if the OFWs are categorized as “ irregular” or undocumented, such was Atienza’s case.

“ She was bound by a contract which turns out to be non-existent. The Department of Foreign Affairs, the Overseas Workers Welfare Agency or the Philippine Overseas Employment Agency have no records of her working either in Singapore or Mongolia. This virtually exonerated her local agency here in the Philippines and their counterpart in Singapore of any accountability,” he said.

Martinez also called on the DFA to take a more active stance and interest in Atienza’s case because a high-ranking person in a diplomatic position may be involved.

He cited the recent rape case involving Panamian diplomat Erick Shcks and his 19-year old Filipina victim and expressed fears that the same “diplomatic immunity” would be used to protect Atienza’s former employer and suspected killer.

“We are worried that due process on Atienza’s case would be waived despite discrepancies in the autopsy reports because of the diplomatic status of the strongest suspect in the case,” he said.
Martinez said the Aquino administration and its DFA officials should be more active in intervening in cases involving the mysterious killing of OFWs such as Atienza’s.

“We call on the DFA, our lawmakers and the Philippine Consulate in Mongolia to actively and aggressively intervene on behalf of Atienza’s family. We will also be lobbying before national and international human rights groups and advocates for Atienza’s case,” he said.