Iggy Rodriguez, the artist as a conscious political being

Rodriguez shared that among the issues he most likes tackling in his art are human rights and the social ills that erupt as a result of the lack of respect for it.

“There’s homelessness, unemployment, extreme poverty, exploitation and war. These are universal themes that are sadly not addressed enough by mainstream artists in their work,” he said. As an aside, he added that social alternatives are also important – they should be discussed in art as a counterpoint to the social horrors.

Rodriguez also carries a very practical approach when it comes to his work as an artist. This, he said, is also something he learned as an activist. Before he begins his work, he sits down and plans the process. He considers all the factors involved in the undertaking, from the gallery venue, how he will transport his work, if he will have help putting up the paintings. Then he begins to put together and smoothen out his ideas, contrasting and comparing them against each other and determining which are sound and which are weak.
“It’s easier to create when I’m already fully-confident in the ideas or messages I want to convey. Every line, every brush stroke has to count because mistakes can alter the entire piece. When I do make mistakes though, I have learned how to make them look deliberate or intended,” he said smiling.

It’s also surprising to know that Rodriguez also learned to depict images directly from his brain, from his own imaginative store of images or interpretations of them. While most artists learn to make their renderings more life-like or exact by using representations (or using models), Rodriquez began rendering images without using photographs or looking at photographs as he painted or drew.

“I was like that in my first few years of painting and drawing. I simply sat and began creating my ideas of what an object looked like, or putting together the images I saw in my head if they were realistic,” he said. Eventually, however, he felt that something was lost or absent in his work because he sometimes missed details he felt he should have added.

“Say shadows, for instance; or how light falls. Or the folds of cloth or a sleeve as it is worn part of a shirt or blouse. I felt that some of the drama is lost from a piece when I am unable to render details more exactly. When I feel this about a piece I am doing, I use representations,” he said.

Every year, his collective work with Ugat Lahi get burnt to ashes in Mendiola fronting the presidential palace or in Batasan Avenue during the annual State of the Nation protests, but Rodriquez, on his own, has already built a comprehensive body of work. Already known in activist art circles, he is not new either to the mainstream local art scene, and he has even exhibited abroad. 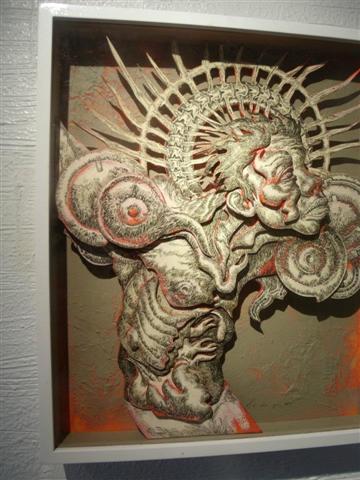 He has had exhibitions in the up-market galleries ion Makati, Pasig and Quezon City, but his work has also been featured in the Cultural Center of the Philippines (CCP), Singapore, China, Singapore and Cambodia. He has also won recognition from various art institutions. In 2009 he was among the CCP’s 13 Artists awardees. In 2003, he was among the awardees of the Art Association of the Philippines (AAP) Annual Competition, and won the grand prize in the 2001 competition of the same association.

His last solo exhibition was the series he titled ” Genuflect” at the Kanto Artist Run Space at The Collective in Makati this May. It consists of five pen and ink works on paper, one cut-out, and one installation-sculpture piece. In this series, he displays his remarkable mastery of using the pen and ink as a medium.

Rodriguez said “Genuflect” expresses his views on how power corrupts and how the greed for it distorts humanity. There are different kinds of power, he said, such as the power of religion and its institutions; the power of nations, governments and their armies; and the power of wealthy corporations. The rapaciousness of corporations, the military violence of governments, and the close-minded righteousness of certain religious institutions and its leaders all constitute power that serve no one but those who wield it, while the effects on everyone else in society are brutal, maiming, destructive. 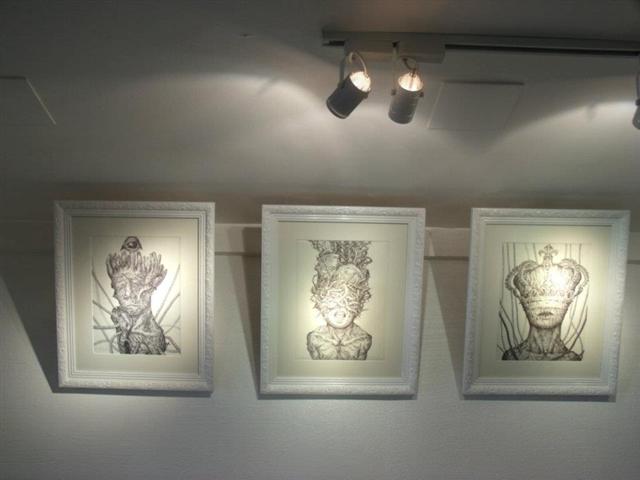 Rodriguez’ stand as political being cannot be dismissed in how he depicted the institutions he believes to be against humanity and the greater good. Even how the frames of his drawings were hung on the gallery wall revealed a criticism against the power of religion and how it imposes on believers: they are hung the way images of the Stations of the Cross are traditionally displayed in Catholic churches. One is forced to look up, and the paintings are looking down, seemingly forcing themselves on the viewer.

In the meantime, critics have not ignored Rodriguez’ gift when it comes to working with pen and ink. In her review of the exhibition, social critic and writer Katrina Stuart opines that “Genuflect” reveals not only Rodriguez’s critical perspective and intellectual stance on religiosity and faith, but also how he pays great attention to detail.

“What resonates is the discipline, the control, the knowing when to stop and how. After all, between the installation and the pen and ink works, a lesser artist would’ve and could’ve gone crazy. But in Rodriguez’s hands there is a sense of taking an image and running as far away with it as possible, and taking it back to where it started to make sure it’s saying what it must. Here one finds that Rodriguez is able to push the spectator into acknowledging those limitations, seeing the control, and finding that anger and discontent can be in the thinnest of lines drawn, its magnitude measurable by the painful patience that must have gone into such detailed work,” she writes.
Currently, Rodriguez is working on two paintings for the House of Matahati, an independent art space in Ampang, Kuala Lumpur, Malaysia. He shared that his work will dwell on the issues of poverty and want. He is also preparing for his tasks as a coordinator for Makabayan Coalition and its bid to send Bayan Muna Rep. Teddy Casiño to the senate.

In the next five years, Rodriguez said he will still be doing what he’s doing now.

“Five years ago I said that I would still be doing what I am doing now — art projects, rallies, organizing work for the organizations I belong to, drawing and painting. There’s no reason for me to think or say that I would be doing anything much different five years from now, but I do hope that I would be much, much better at all those things,” he concluded.