“The Aquino government has yet to present a convincing program to remedy the existing shortages in the education sector. How can basic education qualitatively function amid these dire shortages?” – Rep. Raymond Palatino

MANILA – School opening is just a week from now, the Department of Education (DepEd) has started its “Brigada Eskwela” where teachers, as well as parents and students, are mobilized to clean their respective schools in preparation for the coming school year. The DepEd had also announced their preparations on the implementation of the K to 12 program for grade one and grade seven students. However, perennial problems in the basic education system remain.

The K to 12 program is a flagship program of President Benigno “Noynoy” S. Aquino III. With the implementation of the said program, the government aims to improve the quality of basic education in the country.

“We have this new curriculum to be implemented, but shortages are not being addressed so the same problems would just occur this school year,” said France Castro, secretary general of the Alliance of Concerned Teachers (ACT) told Bulatlat.com.

On the other hand, Anakbayan lamented, the “Brigada Eskwela” only underscores the government’s neglect of the education sector. “We see parents, teachers, and volunteers helping out to prepare the schools for the class opening. Most of the materials were donated by private institutions and individuals, yet, DepEd is admitting that a lot is still needed. This clearly manifests that the government does not prioritize the education sector,” said Cherry Orendain, spokeswoman of Anakbayan-Davao. 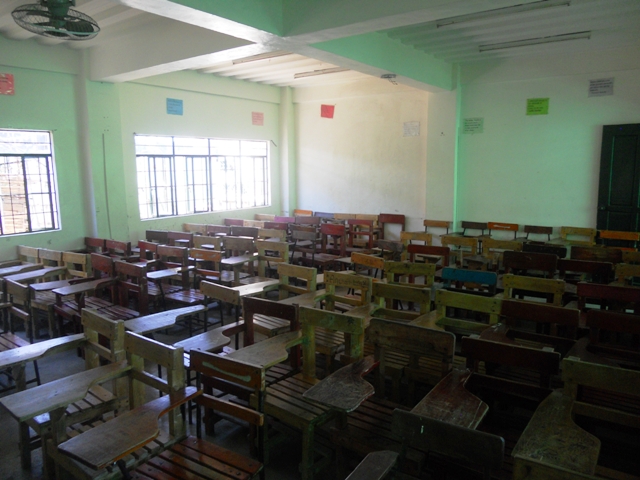 The Navotas National High School has more than 3,000 students who would be cramped in only 21 classrooms. “Our classroom size is smaller than the standard size of seven meters by nine meters. Last school year 2011 – 2012 our class size was 80 to 90 students. Some were forced to sit outside the classroom,” said high school teacher Regina E. Ramos, 49, who has been teaching for 23 years already.

For school year 2012 -2013, Ramos said, their principal has thought of a scheme or what they call as an alternative delivery mode on how they will conduct their classes. This scheme, Ramos said, is aimed at not only accommodating the new enrollees but also to decongest their small classrooms.

“We have a scheme called in-school, out-school where our class size of 90 will be divided into 45 per shift. And instead of coming to school every day, one shift of 45 students would hold classes every Monday, Wednesday, and Friday, and the other shift would have classes on Tuesdays and Thursdays. This was approved by the DepEd and the local government as well,” Ramos said in an interview with Bulatlat.com.

Ramos further explained that those students who are not scheduled to go to school on particular days would be given home works. Classes will be held from 6:00 a.m. to 1:00 p.m. The subject MAPE (Music, Arts, Physical Education and Health) will be held once a week. This is the first time that Navotas National High School will implement such scheme, Ramos said.

“This is the first time that we will do this scheme and hopefully it would be a success. We have no space here in our school to expand. Our new building is not yet finished. If our principal did not think of other ways to accommodate the students, they will be spending their whole school year cramped up in a small classroom. What else would they learn?”

The number of students is increasing year by year; Ramos said they cannot refuse any student. In this way each student could have his or her own chair and teachers can closely monitor them, she added. 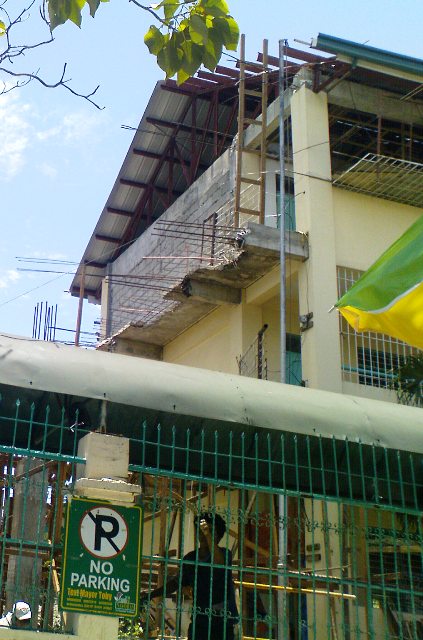 With only a week before school opening, the three-story building intended for the increasing number of students is still under construction in Navotas National High School.(Photo by anne Marxze D. Umil / Bulatlat.com)

A three-story building is still under construction in the Navotas National High School. In the new building, classrooms would have the standard size of seven by nine meters. “This would address the classroom shortages.”

They are also lack of books. “One mother was complaining lately because we have one book left. But what else could we do? That’s all we have.”

Dante A. Verdera, 49 , who has been teaching for 22 years, said their school the Godofredo M. Tan Memorial School in Quezon Province is in the process of building makeshift classrooms to accommodate their students.

“Our students number around 1,500. As of May 21, there are already 1,000 students who have enrolled, And yet some old students have not yet enrolled. More students will enroll a few days before classes open on June 4,” Verdera said. They are also suffering the same burden such as shortages in classrooms, teachers, books and chairs. He lamented that he handles at least 60 students per class. The standard ratio is one teacher per 35 students.

Ramos criticized the under spending of the government fund for the education sector. She said the efforts of the government to reform and improve the education system in the Philippines are being defeated for as long as the shortages are not addressed. “The government has spent money in many projects. I just can’t understand why they can’t hire more teachers and give the salary grade 15 that the teachers have long been calling for,” Ramos said. 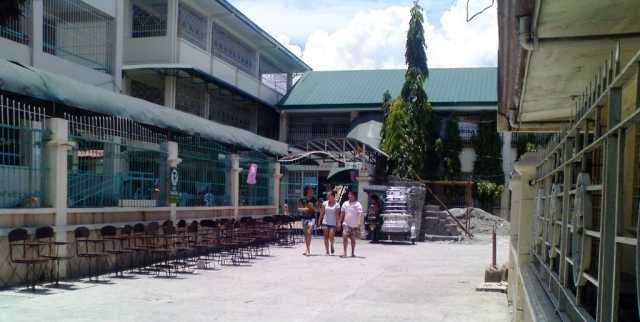 For as long as the shortages are not addressed, Ramos said, students will always suffer from lack of chairs, textbooks and classrooms. “If the government only allocates a bigger budget for education, then these shortages can be addressed. It’s the students who sacrifice with the lack of facilities. The bottom line here is the budget.”

The education sector has the highest priority in the national budget, the government claims. However, the approved 2012 national budget revealed that debt servicing got the highest allocation of P738.6 billion ($17 billion) while defense got P113.1 billion ($2.5 billion). Social services got P575.8 billion ($13 billion) or 31.7 percent of the entire General Appropriations Act (GAA), mainly for implementing dole-out programs such as the Conditional Cash Transfer program, the flagship program of Benigno “Noynoy” S. Aquino III administration.

In news reports, the budget for education has also increased to P238.8 billion ($5.5 billion), which, according to Aquino, is “the biggest budget of all departments.” However, Kabataan Party-list rep. Raymond Palatino said, despite government declarations that it is giving the education sector the highest priority in its budget, the entire allocation for education is stilled pegged at levels insufficient to ensure that every child is able to enjoy his or her right to education. “While Unesco recommends that 6 percent of the GDP should be set aside for education, DepEd only received 2.1 percent of the GDP for the current year.”

Change in curriculum, not the answer to quality education
The DepEd figures on shortages are glaring; progressive youth group Anakbayan expressed dismay over the same problems that would greet them this coming school opening.

“The Department of Education has said it themselves that we still lack classrooms and teachers. With the upcoming implementation of the K to 12 program, the same burden will greet parents, teachers, and students during the opening of classes,” Orendain said.

She also added that K to 12 is not the answer to address the degrading quality of education in the country. “It will only burden our teachers, our parents and the students.”

Teachers do also agree that the change in the curriculum is not an assurance of quality education. Castro said the curriculum changes almost every we have a new president, but the quality of education continues to deteriorate.

Kabataan Party-list Rep. Raymond Palatino reminded education officials “not to get too carried away and too preoccupied with the grandiose and ambitious plans of the program while relegating to the sidelines the most basic and essential concerns that continue to beset our teachers, students and other concerned sectors, problems that have actually contributed to the sorry state of education we have today.”

Palatino also added that the K to 12 program envisions to produce graduates with ’21st century skills’ however, the country is far from having 21st century facilities essential in achieving suitable learning conditions. “The Aquino government has yet to present a convincing program to remedy the existing shortages in the education sector. How can basic education qualitatively function amid these dire shortages? Students cannot properly learn if, in the first place, there are no sufficient classrooms to study in, chairs to sit on, teachers to learn from, and textbooks to read.”