“I want to believe that there is hope.” – Mrs. Edita Burgos, mother of missing activist Jonas

MANILA – Unlike Jonas Burgos, an activist abducted on April 28, 2007, military officials implicated in his enforced disappearance are being given an opportunity to defend themselves.

“The chance that they are giving Harry to defend himself is not an opportunity they gave my son. But we are not like them. We are God-fearing. We know how to love and we know how to forgive,” Mrs. Edita Burgos, mother of Jonas, said.

Jonas, who is also the son of late press freedom icon Jose Burgos Jr., was abducted on April 28, 2007 inside a mall in Quezon City. His family, friends and comrades continue to search for him to this day. The military has long been implicated to his enforced disappearance but it was only until Jeffrey Cabintoy, the busboy of the restaurant where Jonas was seen eating, identified Major Harry Baliaga Jr. during the investigation of the Commission on Human Rights that his alleged abductors finally had a name and a face.

Cabintoy, during the recent Writ of Amparo hearing before the Court of Appeals, positively identified Baliaga, who was sitting inside the courtroom. “It is him. It is him,” he said in Filipino. 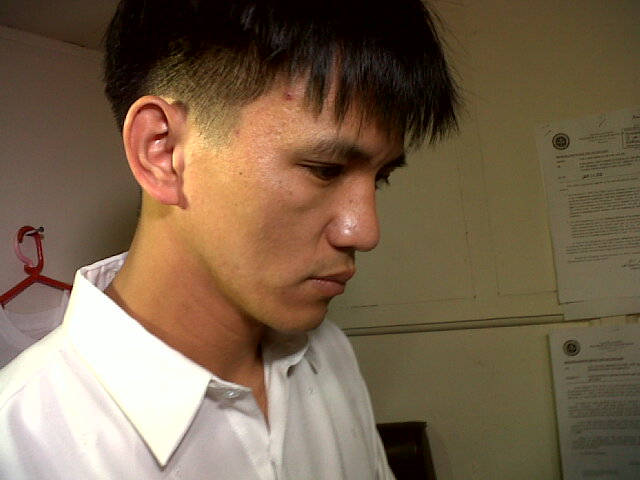 Major Harry Baliaga Jr takes his oath before the state prosecutor of the Department of Justice (Photo by Janess Ann J. Ellao / bulatlat.com)

“I want to believe that there is hope. Today is the first hearing and I am happy that these people [referring to former top state security officials] went out to give their sworn statements [before the state prosecutor],” Mrs. Burgos told Bulatlat.com.

Military did not cooperate

In an ambush interview, Gen. Esperon, one of the high ranking military officials charged with Obstruction of Apprehension and Prosecution of Criminal Offenders, said he ordered an investigation on Jonas’ abduction but it is “classified,” meaning that it is not open to the public, including Mrs. Burgos.

Esperon is referring to the investigation of the missing license plate of Jonas’ abductors’ getaway vehicle, the TAB 194. During the writ of habeas corpus hearing of Jonas’ disappearance back in 2007, Assistant Solicitor General Amparo Cabotaje-Tang told reporters that the said information is confidential.

The military then was forced to declassify the results of the investigation, citing their strong respect for human rights. But JL, brother of Jonas, said in a previous Bulatlat.com interview, that the military was only “compelled to release [the results of the investigation] after the court threatened to cite them for contempt.” He added that the Provost Marshal General deleted the name of 1st Lt. Jaime Mendaros, a former intelligence officer of the 56th Infantry Batallion who prepared a document citing that Jonas should be “neutralized,” in its report.

In their counteraffidavit, the three top state security officials said they have exhausted all legal means to find Jonas. “We performed our functions and duties to the best of our abilities and exhausted all efforts to bring into light the cause of the disappearance of complainant’s son, all within the limits prescribed by existing laws,” the respondents said. They also vowed to present “positive and incontrovertible evidence” before the preliminary hearings of the Department of Justice.

When asked for her reaction on the counteraffidavit of the top ranking officials, Mrs. Burgos replied, “After two years? And he called that cooperation?” she said, “It is a cover-up.” She said that while Esperon indeed has ordered an investigation into Jonas’ enforced disappearance, they did not provide the families a copy of the results. If only it was given earlier, Mrs. Burgos added, they could have limited the parameter of their search for Jonas and, therefore, locate him sooner.

Jonas’ case should serve as precedent to other victims 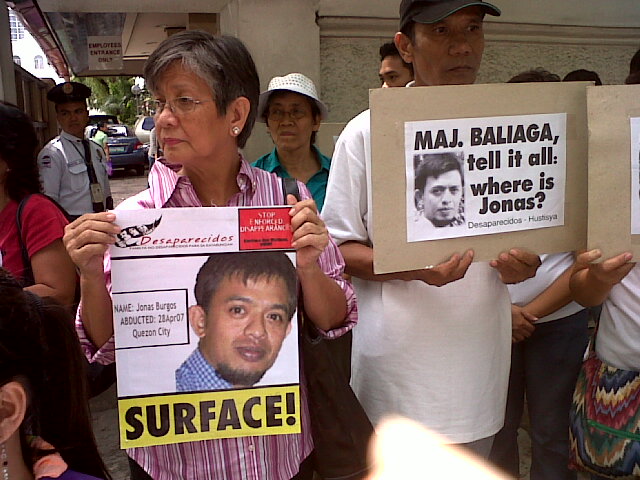 Girlie Padilla, secretary general of the Ecumenical Movement for Justice and Peace, told Bulatlat.com that the start of the preliminary investigation of Jonas’ enforced disappearance is the “fruit of all the hard work and efforts that the Burgos family and their supporters have put into it.”

Padilla added that human rights advocates are one with the Burgos family in their call for Baliaga to spill the beans on the role of the military not just in the abduction of Jonas but also on other cases of enforced disappearances of activists. “We also want to know what they did to them.”

Mrs. Burgos said they hope that the progress of their search for Jonas will serve as a precedent to other cases of enforced disappearances among the ranks of activists. “This is a big thing because we will have a source of hope. We are like family to each other,” she said referring to supporters and relatives of victims of enforced disappearances.

She also expressed her gratitude to the wide media coverage as it would educate the people that “something like this is really happening.” She added that it is also a way for people not to forget these issues.

“We only have the media to help us push for justice while Baliaga and the Armed Forces of the Philippines have all their resources to defend themselves,” Mrs. Burgos said.

“We hope that this case will proceed to trial given the rigorous and tedious process the Burgos family has patiently gone through,” Mary Guy Portajada, secretary general of Desaparecidos, said. She added that the prosecution panel of the Department of Justice “should not waste any time in pursuing this case because the Burgos family has waited long enough for justice and for Jonas.”

Portajada said they would urge more people to join them in the monitoring of this case. “The AFP has been covering up the truth about Jonas and all other desaparecidos. Baliaga and other respondents should answer the allegations and tell the truth.”