MANILA – It was just an ordinary Saturday, June 23, for Ruel, 16; Eduard, 15; Miguel, 13 and Mar, 12 (not their real names). They were looking for junk to recycle and sell when a barangay official arbitrarily arrested them in barangay Marilag in Project 4, Quezon City. The barangay executive officer accused them of stealing a bike in the said village. The young boys later said they were electrocuted and humiliated, a grave violation of children’s rights.

The barangay executive officer identified as Meniteryo Endozo denied the allegation and said that the boys were notorious thieves. He said the young boys were frequently seen in the village and residents reported incidents of robbery. However, Miguel said, Mar’s school is just nearby and they often play in the village.

The children remember their ordeal vividly. “Ex-o (executive officer) electrocuted us using a stun gun. He even threatened us that we would never see our parents again if he sees us again here in barangay Marilag,” Miguel said. 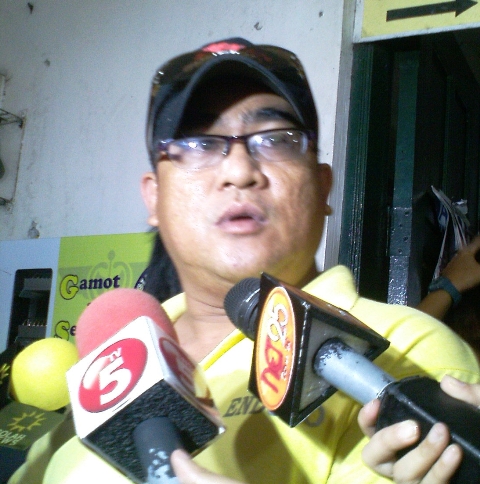 Miguel said he saw Endozo hit Ruel at the stomach and was repeatedly electrocuted. “He saw a policeman in the premises of the barangay hall and complained but the policeman threatened them instead and even participated in torturing them,” he said.

Eduard said the policeman took the magazine out of his firearm, removed some bullets and put some in between Ruel’s fingers and pressed it in front of them. The children were not able to identify the said policeman. He also said Endozo also threw a lighted cigarette butt at Ruel’s back.

The three children, Eduard and Mar’s mother Evelyn and representatives of Akap Bata Party-list held a press conference last June 26, Tuesday to expose the said incident. Ruel was not able to attend the said conference.

‘He should be jailed’

Meanwhile, parents of the victims want Endozo removed from his position. “He (Endozo) should not be suspended but terminated instead. These are minors. He might do it again,” said Jennifer Cawili, 42, mother of Ruel.

“I want him to learn a lesson. He should be jailed so that he would not do it again to other children,” said Evelyn Cabiente, 44.

“He should be jailed. He did not have mercy on us,” Miguel said.

Barangay captain Raul Adatu assured Akap Bata and the boys’ parents that they will investigate the matter. “I will not tolerate such acts. I will create a committee that will investigate this matter. And if Endozo will be proven guilty he will face disciplinary measures,” he said.

The three children and representatives from Akap Bata went to barangay Marilag to confront Endozo. The latter, on the other hand, denied all the allegations against him.

Akap Bata Party-list vows to assist the children-victims of torture in filing cases against Endozo. “We will seek legal advice with lawyers and seek help from Karapatan to file the appropriate charges against Endozo,” Lean Flores, spokeswoman of the group said.

On the other hand, Flores also said the children will undergo counseling to process their traumatic experience.

Flores also reiterated their opposition to House Bill 6052 amending Republic Act 9344 or the Juvenile Justice and Welfare Act of 2006 to lower the age of criminal liability from 15 to 12 years old.

“The rising trend of minors and those children in conflict with the law will surely swell and worsen in the days to come once the Aquino government approves the amendments to the Juvenile Justice and Welfare Act (JJWA) in lowering the age of criminal liability. As child rights advocates, it bothers us to imagine how the State treats children and it would be worse if the age of criminal liability is reduced. It pains us to witness this kind of atrocities on children,” Flores said.

On June 4, Congress passed HB 6052 after third reading. Flores said their group will block all attempts of the government to pass the said law. 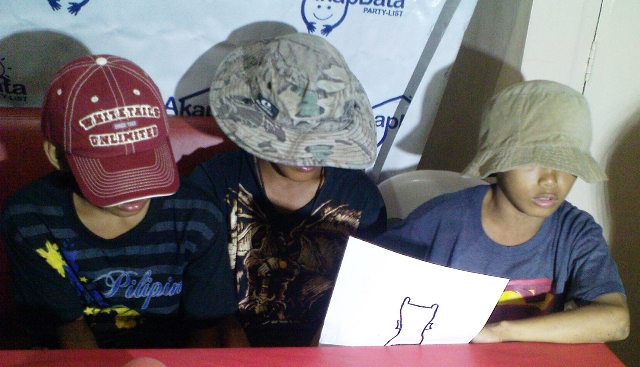 The boys drew the stun gun that the barangay official used to electrocute them. (Photo by Anne Marxze D. Umil / Bulatlat.com)

Rep. Raymond Palatino of Kabataan Party-list, who was among the nine legislators who opposed the passage of the said bill, stressed that a 12-year-old offender needs intervention in a rehabilitation center instead of sending them to jail with adult prisoners.

In his explanation of vote, Palatino pointed out the lack of basic social services as the root of having children in conflict with the law.

“Theft is the top crime committed by children, based on police records. Theft is a poverty crime. Children steal because they need to eat and survive. The challenge is to stop children from stealing and the best approach is to ensure that we are able to provide them with basic social services. Give them proper education, housing, food, clothing, and emotional support to shield them from the world of crime. Prevent child abuse in families to boost the moral and psychological health of children.”

He also said that instead of amending the law, the government should implement it properly first. Child rights group Salinlahi Alliance for Children’s Concerns said the law has not yet been implemented fully by local government units. The group blames the lack of budget allocated to the Juvenile Justice Welfare Council (JJWC), to be able to build youth reformatory institutions.

According to the juvenile council, there are only 30 youth detention facilities in the country. There are three provincial youth homes, 34 at the city level, and 32 at the municipality level. There are 12 youth homes managed by NGOs. As of February 2012, there were 440 children who were detained in adult prisons because of the lack of youth reformatory institutions. Meanwhile, the national government has neglected to provide funds to the juvenile council despite the latter’s crucial mission to uphold restorative justice in the country.

“If Aquino really cares about our young generation then he must heed the cries of our children for justice to all tortured child victims, provide them with the basic social services to prevent them from being in conflict with the law and stop the move to amend the Juvenile Justice and Welfare Act,” said Flores.