Child labor arises in the Philippines because of the government’s failure “in generating decent jobs.” – KMU

MANILA – “Children should have time to play and learn, and to be free from child labor. When children are forced to work, we deprive them, their communities and the country of a better future,” said Lawrence Jeff Johnson, director of the Philippine office of International Labor Organization (ILO), as the Philippine National Statistics Office (NSO) released new data on child labor this week.

Based on reports and despite various organizations’ frequent appeals for the rights of the child, child labor still persists in many countries, especially in less developed countries such as in the Philippines.

“They put their health at risk and their lives in danger,” said Johnson of the millions of child workers. He said member states of the ILO, including the Philippines, have committed to the global goal of ending the worst forms of child labor by 2016. But the global economic crisis, he said, has “led to the slow and uneven progress in the fight against child labor.”

To progressive groups in the Philippines, however, the global crisis is not the only obvious drag in combatting child labor. The said crisis, in fact, is a result of the problems that forced children out of school and into hazardous work. According to the labor group Kilusang Mayo Uno (KMU), for example, child labor arises in the Philippines because of the government’s failure in generating decent jobs in the country, which they blame, in turn, on Aquino’s “refusal to veer away from the bankrupt employment program of attracting foreign investors into the country by offering cheap and repressed labor.”

So far, there are no changes being announced in the Aquino government’s job generation strategy, even as the labor department is claiming they are “very determined” in fighting child labor.

Borne by poverty and joblessness

“Children are being forced to work because their parents either have no jobs or are earning pitiful sums in their work,” Elmer “Bong” Labog, chairman of Kilusang Mayo Uno (KMU), said in reaction to news that more than half of 5.5 million working children as of Oct 2011 are considered as child labor and mostly in hazardous conditions.

Unemployment of adults in the Philippines is at a record high based on the Social Weather Stations’ employment survey released last month. Adult unemployment, according to the SWS, hit a record high of 34.4-percent – equivalent to about 13.8 million individuals – in the first quarter of 2012.

The figures, said KMU, may even be bleaker in reality. “The SWS used the government’s definition of ‘unemployed,’ which excludes those who are jobless but are not looking for work, having been demoralized by the lack of decent jobs,” said Labog.

This month, no hint of that bleaker jobs situation came out from the NSO’s jobs report, which even noted an improvement in the number of the employed. The reason for the discrepancy, according to the Gabriela Women’s Partylist, lies in the Aquino government’s PR spin.

“We are all familiar with the previous administration’s penchant for tweaking statistics to desperately paint a rosy picture of her ‘achievements.’ We now see this trickery being put to use by the Aquino administration as well, in its reported increase in the employment rate,” Gabriela Women Partylist Rep. Emmi De Jesus said on the NSO report that claims that the country’s employment rate improved in April 2012.

GWP has chapters in many urban poor communities. Like the KMU whose unionists live in these communities, they get a daily dose of anecdotal reports on the Filipinos’ difficulties at getting decent-paying jobs.

The labor department and the ILO Philippine office timed the release this week of preliminary results of NSO survey on children with the launch of what it calls as child labor free Philippines campaign. It was launched with a bouncy theme song sung by child star Maliksi Morales, after a children’s march and then a few hours of playtime at Frontera Verde’s Fun Ranch in Ortigas, Pasig City. 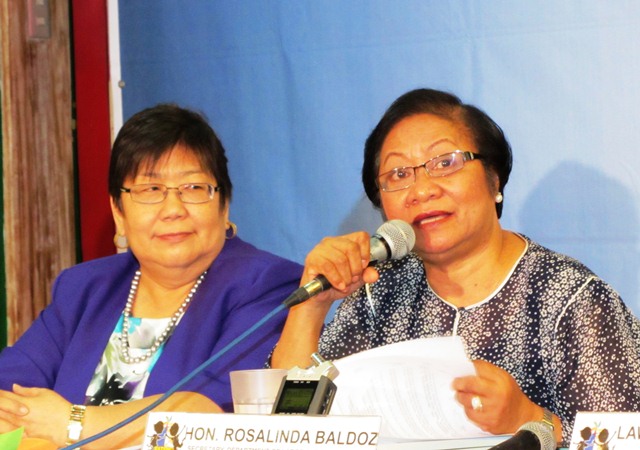 According to Labor Sec. Rosalinda Baldoz, the ILO-funded NSO survey would provide the government a “more accurate and more comprehensive picture of child labor in the country, which the previous 1995 and 2001 surveys did not make available.” The child labor survey was conducted as “a rider” in NSO’s Labor Force Survey last Oct 2011. The DOLE hopes to make child labor survey a regular part of NSO labor force survey.

The child labor survey revealed that one in every five Filipino children is a “working child,” and more often considered as “child labor” compared to those engaged in “permissible work.” Almost three million child laborers, it said, are engaged in hazardous work. (Under the law, child labor is defined as any work or economic activity performed by a child that subjects him/her to any form of exploitation, or is harmful to his/her health and safety or physical, mental or pycho-social development. The law differentiates it from working children in “permissible” situations.)

Majority of working children and considered as child labor are in agriculture, followed by services.

Baldoz said the labor department joined the World Day Against Child Labor with “a very determined” resolve to make every village of the Philippines’ 1,500 municipalities child labor free.” This, she said, they intend to do through a “convergence program,” which they have been doing “even before the conduct of the survey.”

Baldoz said this “scaled-up” campaign against child labor by the government has identified “609 focused municipalities” as priority.

The child labor survey, according to Carmelita Ericta, administrator of NSO, cannot answer whether the Conditional Cash Transfer has helped child laborers to go back to school and quit their jobs. The CCT budget had been increased by 30-percent this year, strengthened by promises that it will help to keep the children healthy and at school.

Unfortunately, according to organizations of teachers and public health workers, public schools and public health centers are in various state of neglect for lack of budget. They have been asking the government for more budget to improve the provision of education and health.

As for decent jobs for the parents, ILO’s Johnson said there is a need to ensure that parents have access to it.

But it is here where the labor department’s “very determined” campaign against child labor appears sketchy. To its target “focused municipalities” which constitute less than half of total municipalities, the DOLE-led campaign, based on its releases is more inclined on “teaching the parents other means of livelihood so they will stop forcing their children to work.”

“We will address child labor one barangay at a time,” Baldoz said.

“What the government should do to create decent jobs is to implement genuine agrarian reform and create basic industries. What it is doing, however, is defending landlords’ control over their lands and refusing to develop local industries in order to please foreign investors,” Labog of KMU said.

“So long as Noynoy Aquino denies workers their just demands for a P125 ($2.90) daily salary increase, and so long as the Philippines does not develop its own national industry, any reported increase in employment rate is just a number that poor Filipino workers cannot feed to their children,” said GWP Rep. de Jesus. She challenged the Aquino government to replace the disproportionate attention to foreign investors by removing structural impediments to economic growth.

Unemployment will continue to be a problem, and its attendant causes such as child labor, “so long as the Aquino administration remains blinded to the fact that what our economy needs is a genuine agrarian reform and a national industrialization program that builds Filipino-owned industries,” De Jesus said. “Together, these form a solid foundation to create jobs, technology and capital that will surpass low value-added manufacturing and services.”