Marya Salamat July 4, 2012 9 Comments MDT, US intervention in the Philippines, US troops

Main Story: Nothing to celebrate, no real friendship in master-puppet relations, critics say

MANILA – Members of the umbrella group Bagong Alyansang Makabayan (Bayan) marched to the US Embassy in Manila on Philippine-American Friendship Day to denounce the ongoing US war games in Mindanao. In the rally’s program held at Kalaw St., leaders of Bayan-affiliated organizations took turns expressing their opposition to the Aquino government’s “invitation” to US spy planes to monitor the Philippine seas and “police” the area.The rally coincided with a protest caravan in Mindanao’s General Santos City near where the joint US and Philippine navy war games dubbed as CARAT 12 is being held.

On top of violating Philippine sovereignty with their presence, US spy planes will not just monitor the South China Sea but will also likely do surveillance of Philippine internal affairs and mapping of the country’s resources, Bayan said in a statement.

“We don’t need the US policing the South China Sea,” said Bayan secretary general Renato M. Reyes, Jr. He also dismissed as “ridiculous” the suggestion of Senator Gregorio Honasan to allow the deployment not just of US spy planes but of the US navy’s 7th fleet in the West Philippine Sea, as such moves “will really provoke an arms race in the region and will certainly escalate tensions and flush peaceful solutions down the drain.” 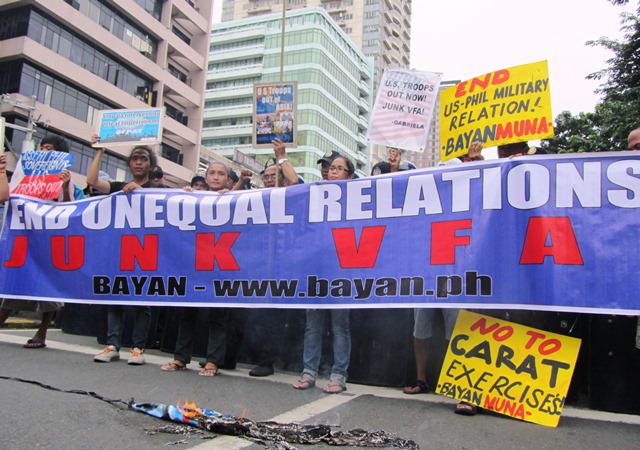 What’s to celebrate in Philippine-US Friendship Day if you can’t even march near the gates of the US Embassy in Manila? protesters ask Jul 4. (Photo by Marya Salamat / bulatlat.com)

“Honasan places his faith on the Mutual Defense Treaty, a one-sided agreement that does not guarantee US support in the event of external armed attack against the Philippines,” Reyes said.

Contrary to promised gains to be had from US military presence, Bayan reminded the Filipino public how despite years of similar war games and port calls, the Armed Forces of the Philippines (AFP) has remained backward and ill-equipped. With that experience, “We don’t see how the use of US spy planes can modernize our AFP and lead to a minimum credible defense,” said Reyes.

While the Philippines is not gaining any but even losing much of its sovereignty with the increased US military presence in its shores and airspace, the US is gaining a lot, according to critics. Through the increased “rotation” (as against “basing”) of its troops in Asian countries like the Philippines, it is achieving its desired purpose. Protesters detailed how the US’ desire to remain the number one superpower in Asia is gaining tremendously from exploiting the Aquino government’s claims on the West Philippine Sea. But according to Reyes of Bayan, “The US is not under any obligation under any existing treaty to take the side of the Philippines in that dispute.”

In fact, the US government has explicitly stated the past few months it will not take any side in the said dispute. Analysts, meanwhile, have warned Filipinos that the US is simply using the territorial dispute in Asia-Pacific to expand its presence in the region and increase its leverage against China, which it is trying to prevent from maturing into a rival superpower. 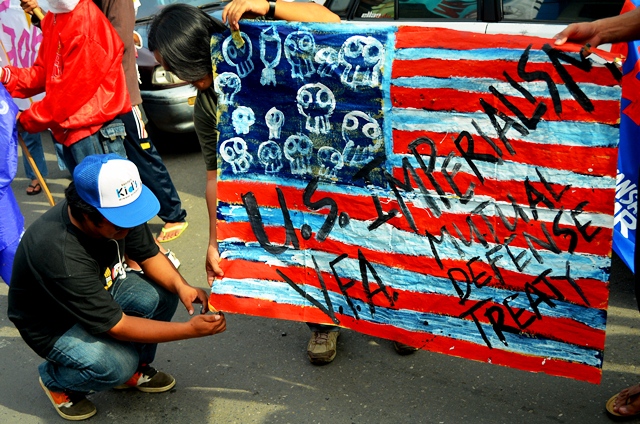 As in Manila, protesters in Davao City burn a US flag on Philippine-American Friendship Day. (Photo courtesy of LFS-Southern Mindanao Region / bulatlat.com)

In past interviews with bulatlat.com, UP political science professor and geopolitics expert Roland Simbulan said the US will not likely choose the Philippines over China. In fact, logic points to US dropping the Philippines over China especially when the two arrive at a mutually acceptable power sharing arrangement. And they will most likely arrive at that, Simbulan said. The US is heavily indebted to China; many of its multinational companies are also located in China, which is also one of its biggest markets. “What is the Philippines to US compared to China?” Simbulan asked.

Worse, “The US is just keeping us perpetually dependent so it can dictate on us. Our armed forces will never modernize under this patently unequal arrangement,” Reyes said. He warned that the increased US power projection could prompt a counter power projection from China. When that happens, how would the Philippines fare? Reyes asked.

Bayan cautioned the public against the US “really exploiting the situation for its own agenda,” and resurrecting its old closed down military bases, under a different name and scheme. They urged all patriotic Filipinos “to oppose this retrogression.”