You Are Here: Home → 2012 → July → 4 → Humanitarian mission triumphs over attempts of military to sabotage activities

Humanitarian mission triumphs over attempts of military to sabotage activities

LOPEZ, Quezon – Determined to bring food, medicines and other relief goods to the impoverished and highly militarized communities in South Quezon, the Save Bondoc Peninsula Movement overcame one hurdle after another.

The more than 300 delegation of the Save Bondoc Peninsula Movement’s mercy mission and peace caravan went to San Andres and Lopez towns in Quezon province, south of Manila from June 25 until July 1.

On June 26, while the 17-vehicle caravan was traversing the road from Lucena City to San Andres, metal spikes flattened the tires of three jeepneys. The site of the incident, the Malaahos village in Catananuan town, is about a hundred meters away from the camp of the Philippine Army’s 76th Infantry Battalion.

“The military obviously prepared for our coming but we managed to overcome the obstacles,” Orly Marcellana, spokesman of the Save Bondoc Peninsula Movement told Bulatlat.com in an interview.

Marcellana said the peace caravan and mercy mission was blocked seven times by soldiers and policemen. Eight battalions of the Armed Forces of the Philippines, paramilitary and police are deployed in the 22 towns of Bondoc Peninsula.

Streamers branding Karapatan, one of the conveners of the Save Bondoc Peninsula Movement, as New People’s Army (NPA) supporters, were posted in public places. Written as signatories of such streamers were BondPen for Peace, Peace Advocates, Peace for Progress. Residents said they saw men in uniform putting up the streamers a day before the caravan came.

Leaflets linking the Save Bondoc Peninsula Movement to the NPA were also distributed to residents. In one leaflets, Orly Marcella, spokesman of the network, was maligned, accusing him of “extorting” P5 million ($116 thousand) from local government units.

After a 12-hour trip, the caravan reached Talisay village, San Andres town in the evening of June 26. Fourteen soldiers of the 74th Infantry Battalion were holding a meeting with the residents, telling them that the mercy mission was the handiwork of the communist guerrillas. 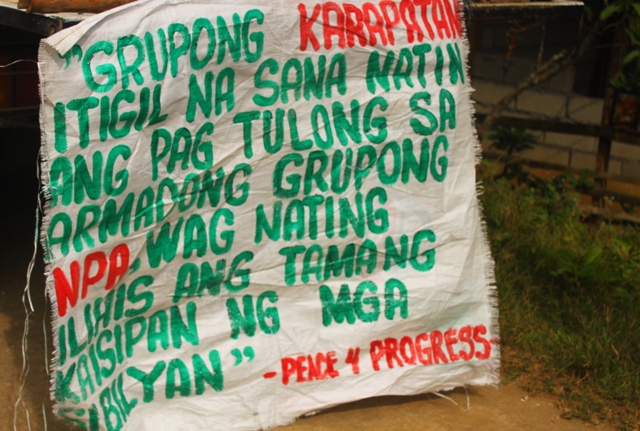 One of the streamers reportedly put up by soldiers.(Photo by Ronalyn V. Olea/ bulatlat.com)

The Save Bondoc Peninsula Movement is composed of Church-based organizations, human rights advocates, professionals and people’s organizations. Relief goods came from local government units, Church groups such as the Caritas Manila, National Council of Churches in the Philippines, the Redemptorists, among others.

On June 29, the caravan left San Andres to proceed to Lopez. That morning, two drunken soldiers entered the local church of the United Church of Christ in the Philippines (UCCP), which served as the venue of the Save Bondoc Peninsula Movement’s activities.

On the same day, the caravan stopped at the Catanauan public market to distribute relief goods to the residents. Members of the Save Bondoc Peninsula Movement noticed a man taking photographs of the activity. When the caravan’s security team was about to approach the man, the latter ran away, leaving his bag behind.

Inside the bag were bullets, handcuffs and an identification card with the name Alex Baronia, a member of the Bureau of Jail Management and Penology. The Save Bondoc Peninsula Movement turned over Baronia’s belongings to the local police.

Later that day, members of the Catanauan police chased the caravan, attempting to arrest Darwin Bonrosto and nine others for alleged robbery charges. Members of the mission refused to surrender Bonrosto.

The caravan proceeded to the town center of Lopez for the second leg of the mission. A day before their arrival, organizers learned that a certain Captain Manalo of the Army’s 85th Infantry Battalion talked to the Office of Mayor Isaias Ubana II, asking for assistance for the military’s medical mission.

The Army’s medical mission was scheduled on the same day and in the same village where the Save Bondoc Peninsula Movement would hold its activities.

Adrianne Mark Ng, provincial coordinator of Bayan Muna party, said they clinched the support of local government weeks before the activity. Suddenly, the medicines, health personnel and even food for the volunteers initially intended for the Save Bondoc Peninsula Movement were rechanneled to the military. 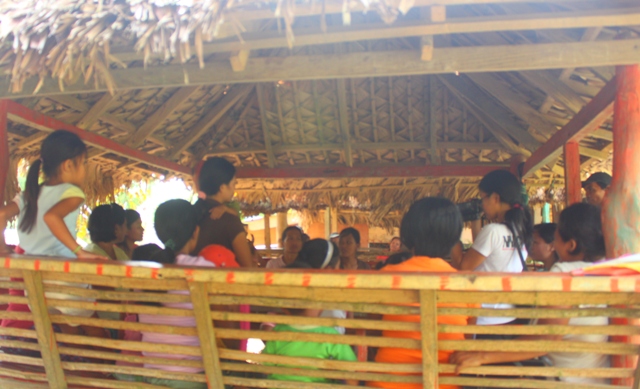 The caravan reach San Francisco-B village of Lopez town around 9 a.m. of June 30. Members of the Save Bondoc Peninsula Movement were surprised to find out that the venue of the mission’s activities, the San Francisco National High School, was already occupied by soldiers of the 85th IBPA. Even as the group obtained a permit from the school principal weeks ago, the soldiers refused to leave the school premises.

The Save Bondoc Peninsula Movement then looked for another venue. After negotiating with the local village officials, they were allowed to use the grounds of the local elementary school.

At around 11 a.m., seven soldiers of the 85th IBPA, in full military uniform and brandishing high-powered rifles, went near the venue of the mission. Leaders of the Save Bondoc Peninsula Movement asked them to leave the place but the soldiers remained there for almost two hours. One of the soldiers, with Burgos on his nameplate, said they were there to protect the civilians from harm. The other soldiers covered their nameplates with their guns.

A few meters from the venue, two more sets of soldiers were seen. The soldiers approached the residents who attended the mission.

Before dusk, the caravan left the area and went back to the town center of Lopez.

The next day, the caravan proceeded to the headquarters of the Armed Forces of the Philippines Southern Luzon Command in Lucena City. While the protest was going on, a police car, with its loud siren on, stopped in front of the military camp.
From Lucena City, three police vehicles tailed the caravan up to the next town.

“The military is obviously desperate. But our experience tells us that the people of Southern Tagalog can always defeat state terror,” Glendhyl Malabanan, Karapatan-Southern Tagalog secretary general, said.