“We directly pin the blame on Aquino’s relentless drive to retool all services under the Public Private Partnership, which is really just privatization.” – Gabriela

MANILA – With prices of basic commodities going up unabated, the last thing Filipino families need is another spike in electric rates. But the government recently allowed an increase in electric charges.

Mothers,who bear the brunt of having to budget their meager income and make sure it covers their daily needs, were at the forefront of the protests against the increase.

Nida Nañoz, 52, a resident of sitio Militar in Project 8, Quezon City, said she remembered how dismayed she was upon seeing this month’s electric bill, now amounting to $70 from only $23. She shares a house with her three siblings and their families and now they are at a loss on where to get money to pay for their bill.
Her husband Solomon, 52, only earns $4 to $6 a day as a pineapple vendor.

Under such predicament, Nañoz expressed her dissatisfaction on how President Benigno “Noynoy” C. Aquino III is handling the welfare of poor Filipino families. “At first, he said that the people are his boss. Where is that promise now?”

The Energy Regulatory Commission has recently approved the petition of Manila Electric Company (Meralco) to allow the maximum average price (MAP) of $0.038 per kilowatt hour for distribution, supply and metering charges. It would reflect on customers’ bills starting this month until June 30, 2013. 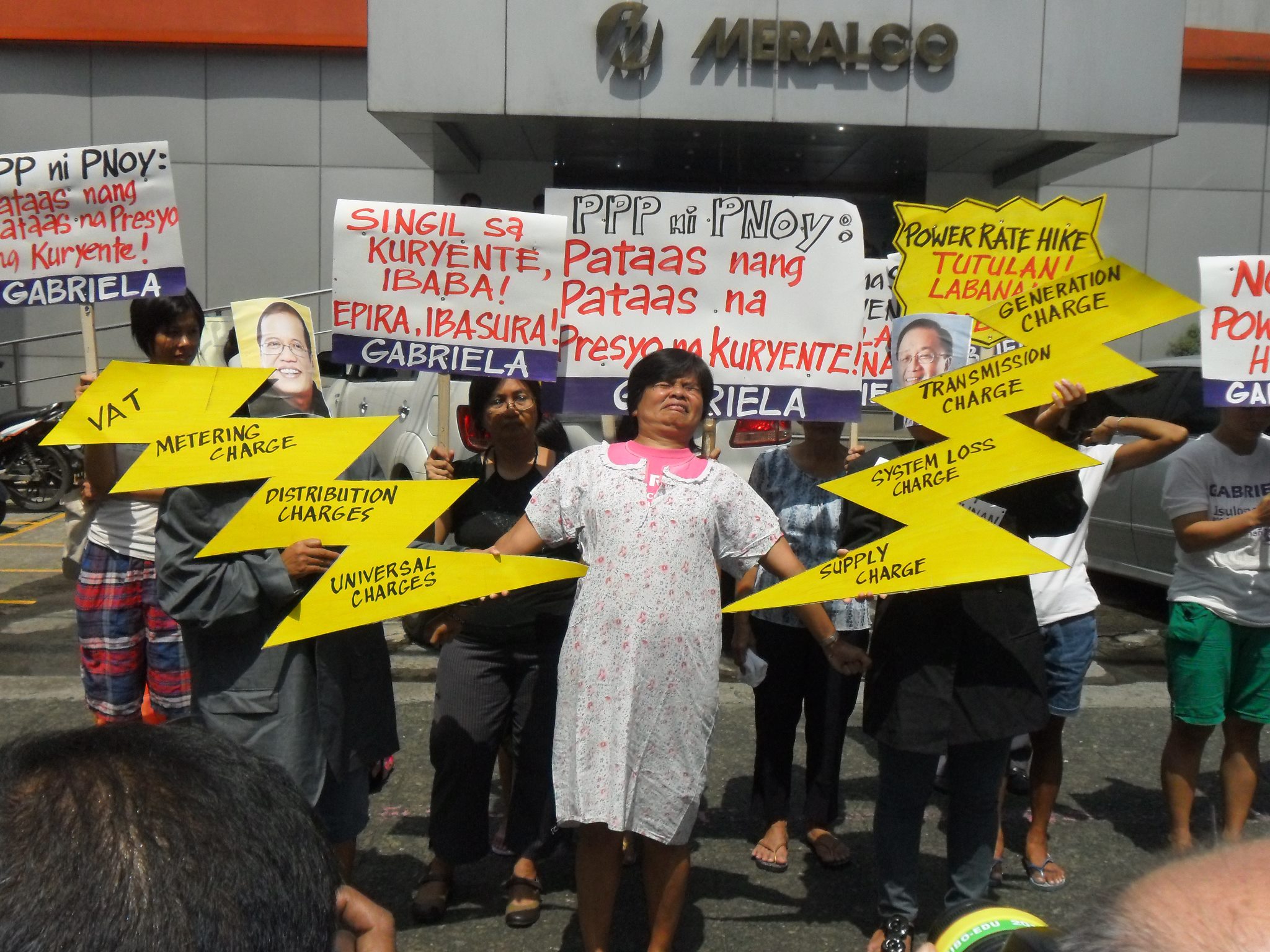 Mothers say they would be electrocuted with the unabated increase in electric rates(Photo courtesy of Rhoda Manglalan / bulatlat.com)

Nañoz said they have several energy-saving measures at home. But it was not enough to keep their electric bill from going beyond what they could afford to pay. To keep from getting their supply cut, Nañoz is pondering on the possibility of borrowing money from loan sharks. She is also clueless on how they would be able to further limit their electric consumption.

The increase in the electricity rates, she added, has brought “headaches” to their family. “Where are we going to get that much money this soon? Since there are four families living in our house, we need to come up with $17 each family.”

“We hardly ever use any of our appliances at home. We do not own a television set or a refrigerator. We only have three electric fans, three fluorescent lamps and four small light bulbs,” Nañoz said, adding that they turn off the lights at night and even their electric fans due to the rainy weather for the past few days.

Meralco said in a statement posted on its website on July 9 that they would increase their generation charge by $.007 per kilowatt hour “due to another spike in the price of electricity sold in the Wholesale Electricity Spot Market.”

They also gave their customers a heads up on a “further increase in the August billing month” due to the “scheduled eight-day maintenance shutdown of the Malampaya pipeline in mid-July, which in turn could force the natural gas plants to utilize more expensive liquid fuel.”

While Meralco reiterated that they only get about 16 percent of the total electricity bill, a Philippine Star report revealed that it has a core net income growth of five percent to $79.53 million in the first quarter this year. “Its target core profit for this year – or excluding non-recurring item – is $348.84 million from $346.51 million last year,” the report read.

“The president can do something to address the unabated increases in the prices of basic commodities and rates of utilities if he really wants to. Prices of almost everything is increasing nowadays, from sugar to rice,” Nañoz said.

Nañoz, along with other members of Gabriela, a women’s group, trooped to the branch of Meralco along Kamuning Road in Quezon City. Joms Salvador, deputy secretary general of Gabriela, said the approval Energy Regulatory Commission to allow the increase in the electricity rates will “further erode stagnant family incomes and worse women’s economic conditions amidst a faltering economic picture.”

Salvador said the Philippines has the “sorry distinction of having the world’s most expensive electricity at $0.36, a record which was formerly held by Denmark at $0.33.” She also criticized the proposal of the National Power Corporation to increase its generation charges by $0.007 this year and $0.005 next year.

“We directly pin the blame on Aquino’s relentless drive to retool all services under the Public Private Partnership, whichis really just privatization,” Salvador said. She added that the Electric Power Industry Reform Act, which allows private companies like Meralco to increase their adjustment mechanism to keep the company profitable, would continue to worsen the conditions of Filipino women.

Bayan Muna Rep. Teddy Casiño said he is planning to initiate an inquiry into the recent increase in power rates and its “inconsistencies with plunging oil prices and suspicions that the Wholesale Electricity Spot Market is being manipulated by the big players.”

“It seems that Meralco finds a new reason every month to increase their rates,” Casiño said. He added that the electric firm increased a P.54 per kilowatt hour and P.3 per kilowatt hour due to higher generation charge and distribution charge, respectively, for the past two months.

Casiño said they would be looking at “dubious under-recoveries, systems losses, transmission costs and other charges that are being imposed to customers.” He also expressed his suspicionsthat there is rate manipulation at the Wholesale Electricity Spot Market.

Other provinces and regions in the country are also experiencing rate increases in electricity. Casiño said that there would be a P1 and P.32 kilowatts per hour increase in Cebu and Iloilo, respectively.Meralco is also set to increase by 3 centavos per kilowatt hour in its distribution, supply and metering charges for regulatory year 2013.

“Considering that the Philippines already has the highest power rates in Asia, this is like suicide. It will further make our industries and the economy uncompetitive. The trend is really alarming and requires a thorough investigation,” Casiño said.

“Women demand nothing less than dumping of the ‘useless public private partnership projects.’ The only solution is to nationalize strategic industries such as power generation for the benefit of the people and not as a profit making machine for both corporate greed and government corruption,” Gabriela said.