MANILA — Employees of Radio Mindanao Network (RMN) Davao began a strike yesterday. It is a strike apparently long forewarned by months of fruitless negotiations and series of management refusals to abide by its first signed agreement with the employees.

The employees have been negotiating with RMN for decent wages and benefits since May this year, as stipulated in their first memorandum of agreement, but RMN has reportedly ignored their demands. Instead, it just engaged the workers in “surface bargaining, a token move to appease the workers so that they could get away with ignoring the memorandum of agreement (MOA),” said Dodong Basilio of the National Federation of Labor Union in Davao.

The employees are thus left with no option but to hold a strike, said the National Union of Journalists of the Philippines – Davao City Chapter (NUJP-Davao). Calling RMN a callous employer, NUJP-Davao said the wage hike demand is just a pittance compared to the profits being earned by RMN.

“What we are asking for is very modest, and yet the management is too stingy to give in to the employees’ rightful demands,” said Rey Hernan Fabe, RMN reporter and also president of the RMN Davao Employees Union (RDEU). 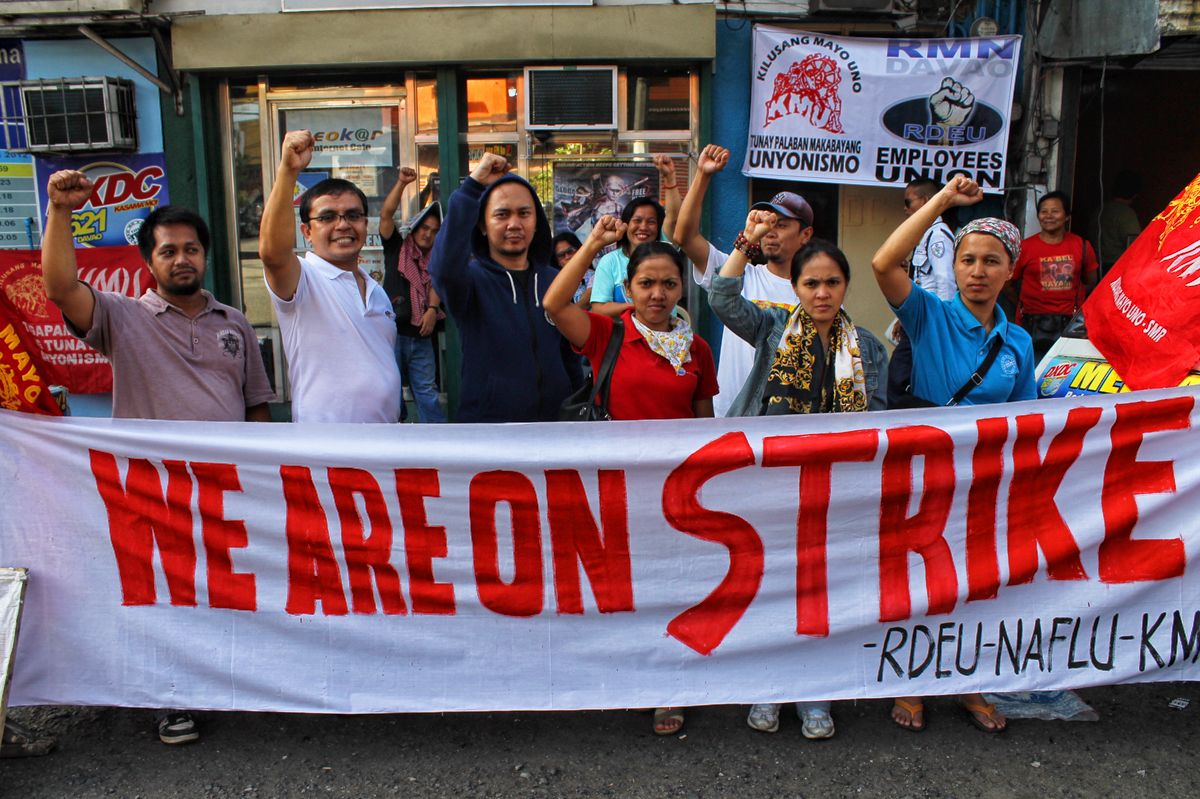 Workers of the Radio Mindanao Network-Davao station launch their strike, Tuesday, scoring the RMN managements’ refusal to give their benefits and failure to negotiate. (davaotoday.com photo by Ace R. Morandante)

The MOA between the RMN employees’ union and management stated that for the first year, union members would be given a graduated lump sum of P 10,000 ($ 239) for those employed more than five years and P6,000 ($143.5) for those employed less than five years. By May this year, the RMN management and RMN Davao employees Union (RDEU) are supposed to have started negotiations on the union’s proposals for P75 ($1.79) wage increase, rice subsidy, meal allowance and a close shop provision.

While the RMN management gave the lump sum, it did not implement other provisions of the MOA; it also discontinued further negotiations. This prompted the RMN Davao Employees Union (RDEU) to file a notice of strike last month.

“We should have started the discussion on wage increase, among others, last May. But no negotiations happened,” Fabe said last week as the union was holding a picket rally in Davao. “This only shows the management’s insincerity to its employees,” he added.

Last week, after a number of postponed meetings, lawyer Cubillo and Bong Bastes, one of RMN’s area managers in Mindanao, finally met with RMN Davao union leaders at the National Conciliation and Mediation Board.

But their almost 10-hour talk was a failure, said Fabe. “The management panel wants us to lift our Notice of Strike and review the provisions we already agreed to last year. What they did was an outright non-implementation of our agreement.”

Former DXDC station manager Dodong Solis said RMN employees and union members “are not dumb; they can clearly see what the management is doing to them.”

Solis, also an officer of the National Union of Journalist of the Philippines-Davao, said “For a reasonable length of time, the workers negotiated in good faith with the management, believing the latter is professional in dealing with them under a fair and legal process but RMN’s insincerity was exposed. Clearly, it engages in delaying tactics, waiting for the perfect time to bust the union.”

Solis himself was dismissed by the management in August 2010 on grounds of “disobedience and loss of trust and confidence.” Solis filed a case of illegal dismissal and won; the case is now pending at the Court of Appeals.

Fabe condemned the management’s “anti-worker” stance saying, “Without the employees, RMN would never have made it to the top. But look at what it’s doing to us?”

The RMN Davao employees union itself is a product of the radio workers’ struggle to defend their jobs and achieve a decent pay. According to the NUJP-Davao, “the workers of RMN Davao awoke to the threat of one day just losing their jobs if they were not going to fight for it.” Following the spate of dismissals that also victimized the station manager, Dodong Solis, the workers formed a union and resorted to collective action in a bid to have some leverage in facing the management.

The same thing happened in RMN Manila, who now has a pending notice of strike. They also formed a union after they saw the employees’ ranks getting thinner from dismissals and their workload heavier without commensurate pay or benefit increase.

After establishing the union, the RMN Davao workers started to negotiate for a Collective Bargaining Agreement (CBA) last year. They said it was high time to have one, “because the soaring price of commodities as a result of oil price hikes had already pushed down their wages further. They say they could not live anymore on a measly P8,000 ($190) per month.

Last year’s bargaining took eight sessions of negotiations before the CBA talks bogged down with RMN refusing to grant any wage hike. In settling the deadlock via Voluntary Arbitration, the two parties signed a Memorandum of Agreement in which the workers still failed to get a wage hike, just a lump sum. But the union consoled themselves with the MOA stipulation promising to tackle the union’s proposed wage increase, rice subsidy, meal allowance starting May this year.

RMN refused to implement this, forcing the union to launch a strike.

“Demands for decent wages cannot be put on hold, especially not with RMN doing good business, raking in huge profits. A decent wage is paramount to the media worker’s well-being. Corollary to this is a condition for a free press,” said Jessie Casalda, chairperson of NUJP-Davao.

Until today though, the RMN and radio workers still have not come to a settlement on wage hike, among others. “Nothing has still come out of it,” Fabe said as he and other union leaders emerged from another meeting with RMN management at the NCMB Wednesday, the second day of their strike.