Kin demand justice for Dutch missionary, other victims of killings

Asked about his message for President Benigno Aquino III, Antonius Geertman, brother of Willem, said, “As the representative of the Filipino people, he should listen to what his people want and that is justice. He owes it to his people.”

MANILA – On Thursday morning in the Netherlands, Antonius Geertman got an email that his brother was shot to death.

“It was an enormous shock for us. If you hear that, you don’t want to believe it,” Antonius told Bulatlat.com in an interview July 11, ninth day since his brother, Willem, a Dutch missionary, was killed by gunmen in Angeles City, Pampanga.

“We did what we have to, to come over here to bury him and find justice,” Antonius said. Willem was buried Sunday in Ma. Aurora town, Aurora province. More than a thousand mourners attended the burial of the slain aid worker.

Antonius said that from the start, it was “quite clear that the killing was not a mere case of robbery.” “We knew it is because of the work he did,” he said. 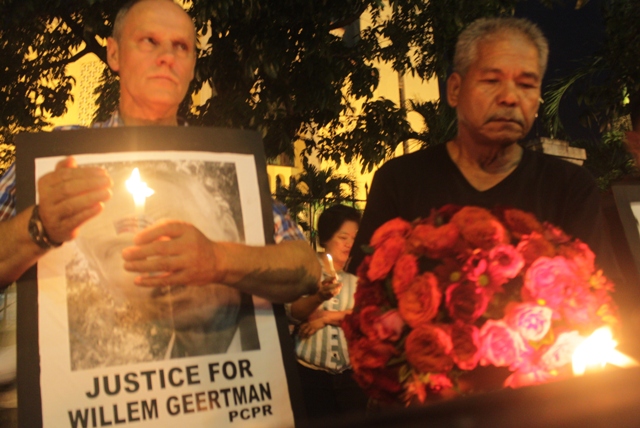 “We are very sad. We’re angry but we are determined to fight for justice,” Antonius said.

Antonius said it was never an option for the family to fly Willem back to the Netherlands.

“We knew that he wanted to stay here, where he chose to live and where he felt at home. He loved the Filipino people,” Antonius said.

In 1979, Willem worked with Bishop Julio X. Labayen for a mission in the Prelate of Infanta in Quezon province. He integrated with the farmers, even put up a hut at barangay Reserva in Baler, Aurora.

Willem and other mission volunteers under Bishop Labayen implemented heath and education programs. According to the Alyansa ng Magbubukid sa Gitnang Luson (AMGL), Willem was instrumental in the formation of local organizations of farmers, peasants, youth and indigenous peoples in Aurora.

He returned to Aurora in 2002, facilitating many development programs for the rural poor. 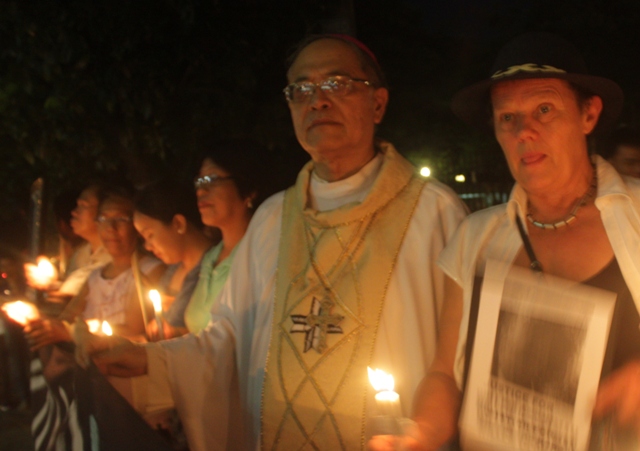 Maria Elizabeth Juttan (right) lights a candle for her slain brother. Beside her is Caloocan Bishop Deogracias Iñiguez.(Photo by Ronalyn V. Olea/ bulatlat.com)

“The only important thing for him was for the Filipino people to have a decent life – education, job, health services – and let not a few people have everything while many people have nothing,” Maria Elizabeth Juttan, Willem’s sister said tearfully.

Antonius said he and his wife had the opportunity to visit Willem four years ago. “We went here to see how he lived, to meet the people he worked with and worked for. We were very impressed. He was very happy to be here,” he said.

Two years ago, Antonius said Willem went back to the Netherlands after a lot of prodding. Willem turned 65, the usual age of retirement in the Netherlands. Willem did not want to go but his siblings gave him a plane ticket. While he was there, Antonius said, Willem spent most of his time meeting relatives and friends, raising funds for the programs in the Philippines.

Willem had planned to return to the Netherland by the end of this month to raise more funds for another project of Alay Bayan Inc. (ABI), an NGO involved in disaster relief and preparedness, where he served as executive director.

Antonius said Willem knew his life was in danger.

“He’s a very brave man,” he said of his oldest brother.

Before the incident, staff members of ABI noticed suspicious-looking men loitering in front of their office.

According to the AMGL, during the height of the implementation of Oplan Bantay Laya, former president Gloria Macapagal-Arroyo’s counterinsurgency program, Willem was vilified by the Army’s 48th Infantry Battalion as a leader of Communist Party of the Philippines (CPP) and New People’s Army (NPA). At that time, Willem was vocal in supporting the campaign of the farmers against the Aurora Special Economic Zone Act (Aseza) of the Angaras, the landlord-political dynasty in the province. 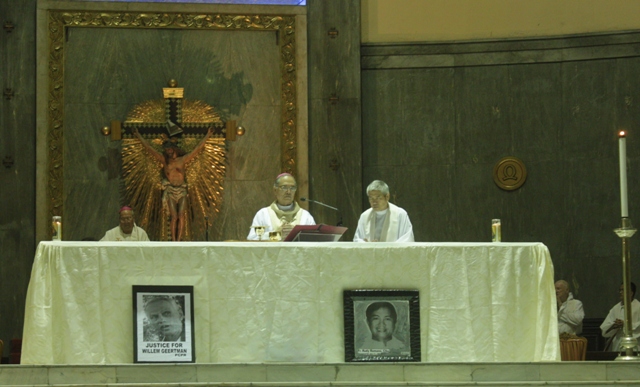 In his homily, Bishop Deogracias Iñiguez said, “Willem offered his life for the attainment of a system that is just.”

Asked about his message for President Benigno Aquino III, Antonius said, “As the representative of the Filipino people, he should listen to what his people want and that is justice. He owes it to his people.”