Not only does the Aquino government remain deaf to calls for the freedom of all political prisoners, it has continued the practice of detaining political dissenters.

MANILA – The number of political prisoners under the administration of President Benigno Aquino III is fast approximating that of former President Gloria Macapagal-Arroyo’s.

According to human rights group Karapatan, 107 of the 385 political prisoners were arrested under the two-year administration of Aquino. The group also documented 222 cases of illegal arrest without detention from June 2010 until June 30 this year.

“It has been two years since we started to campaign and lobby for the release of political prisoners who are in various jails, but President Noynoy Aquino not only ignored our call but also arrested and detained 107 more farmers, indigenous peoples, leaders of organizations and activists, as well as suspected rebels,” said Marie Hilao-Enriquez, chairwoman of both Karapatan and Samahan ng Ex-Detainees Laban sa Detensyon at Aresto (Selda).

Enriquez said Aquino “cannot go on pretending that there are no political prisoners in the country because he is already responsible for detaining 107 activists based mostly on fabricated charges in the same way as Gloria did through the brutal Oplan Bantay Laya.” Oplan Bantay Laya is the counterinsurgency program implemented by the Arroyo administration.

During the nine-year reign of Arroyo, Karapatan documented 343 political prisoners arrested and detained. 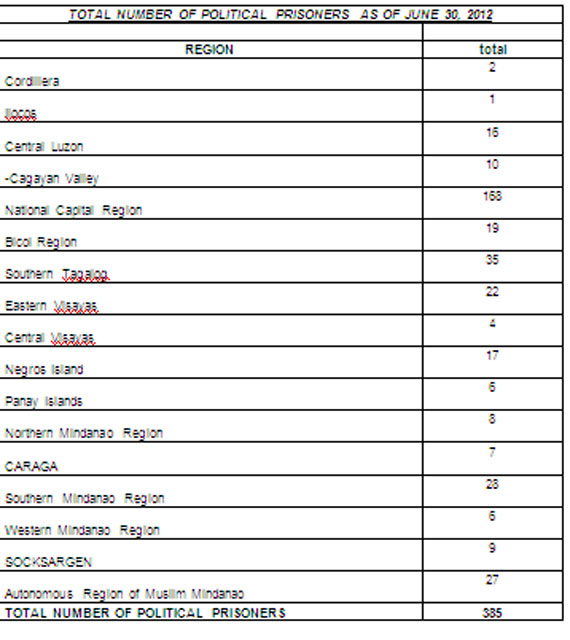 Ipong herself was charged with heinous, non-bailable crimes such as double murder and frustrated murder. It took six years, after all the cases were dismissed before she was released.

Majority of political prisoners are farmers who are fighting for their right to land, said Ipong.

In a separate statement, Anakpawis Rep. Rafael Mariano said “there is a rising trend of criminalization of land disputes wherein farmers who fight against land grabbing and land conversion are charged with common crimes.”

“We find no reason why the government is delaying their release when clearly all the political prisoners especially the sick, the elderly, those in jail too long, and those covered by the Jasig [Joint Agreement on Safety and Immunity Guarantees] should have been released earlier,” Ipong said. 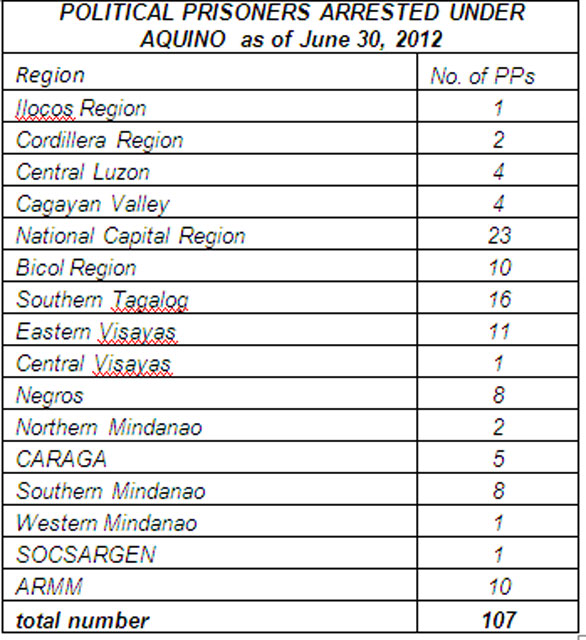 One of them, Jose Ceriales, have been detained for 27 years already. Charged and convicted of murder and frustrated murder, Ceriales should have been released when former president Corazon Cojuangco- Aquino ordered the release of all political prisoners. Ceriales is detained at the National Bilibid Prisons in Muntinlupa City.

Jasig, meanwhile, is a bilateral agreement signed by then Government of the Republic of the Philippines (GRP) and the National Democratic Front of the Philippines (NDFP). According to Jasig, all consultants and staff of both parties are immune from arrest, detention and other forms harassment. Fourteen NDFP consultants and staff who are supposedly covered by Jasig were arrested and detained. Three – Tirso Alcantara , Alan Jazmines and Renante Gamara – were arrested under Aquino.

Ipong said Alcantara and another NDFP consultant, Ramon Patriarca , are under military captivity, which she said, is “violation of due process.”

Under Philippine laws, civilians arrested and charged should be sent to civilian detention facilities.

Alcantara is detained at Fort Bonifacio, headquarters of the Philippine Army while Patriarca has been transferred to Camp Lapu-Lapu, headquarters of the Armed Forces of the Philippines Central Command.
In a joint statement, political prisoners detained at Camp Crame – Renante Gamara, Eduardo Serrano and Eduardo Sarmiento – condemned the “ill treatment” of Alcantara. “He is being poisoned in small doses,” they said.

Ipong said that according to relatives of Alcantara, the NDFP consultant would sometimes discover small pieces of broken glass or match sticks in his food. “After eating, he would sometimes vomit and feel dizzy,” Ipong said.

Ipong urged Aquino to grant an immediate, general, unconditional and omnibus amnesty to free all political prisoners in the country.

Enriquez who was detained during martial law said, “This government is no different from the previous one, it suppresses citizens who fight for their rights amid the severe economic crisis.”