SONA 2012: A chronicle of lies foretold

Aquino’s 90-minute speech, said to be one of the longest SONAs in recent memory, highlighted achievements that progressive groups shot down either as just a deception, a half-truth at best, or simply meaningless.

MANILA – The much awaited annual extravaganza called State of the Nation Address (SONA) starring the current Philippine President, Benigno “Noynoy” Aquino III, supported by his cabinet, leaders of Congress and thousands of government troops and police, unfolded as predicted by various progressive groups in the parallel SONAngBayan or Peoples’ SONA held along Commonwealth Avenue.

Progressive groups warned that based on the Aquino administration’s two-year record, it will spew lies, “big lies,” in his SONA this Monday. Predicting Aquino’s speech is all sweet talk and rhetoric and short on truthfulness, the participants of Peoples’ SONA brought a two-faced 14-feet Aquino effigy for burning. “The people won’t be fooled,” said the Bagong Alyansang Makabayan (Bayan) in a statement.

“Having two faces means being deceptive. That is what this government has excelled in the past two years,” said Crisanto de Leon, chairman of artists collective UGATLahi, which conceptualized the effigy with Bayan (New Patriotic Alliance). He explained that one of Commander-in-Chief Aquino’s faces is doing the sweet-talking while the other face is doing the selling-out and ordering the repression of Filipinos for the enrichment of a few.

“For the third time we are again bamboozled with sweet promises and rhetoric, but in the end, women, and the Filipino people would still ask: Who really benefits from all of Aquino’s claimed progress?” said Joms Salvador, deputy secretary general of GABRIELA women’s alliance.

Aquino’s democracy: red-carpet for the best-dressed, road blocks for the masa

Right from Aquino’s opening statements in his SONA, he immediately proved the accuracy of the statements of progressive groups. Aquino recalled for starters the oppression brought about by military dictatorship. He claimed that democracy has been restored. He shared that having witnessed the hardship of his family and others during martial law, he would now side with anyone who is being taken advantage of and whose rights are being robbed. Yet, outside Congress as he spoke, the police and soldiers were beating back protesters from marching nearer to Congress, as should have been their right. 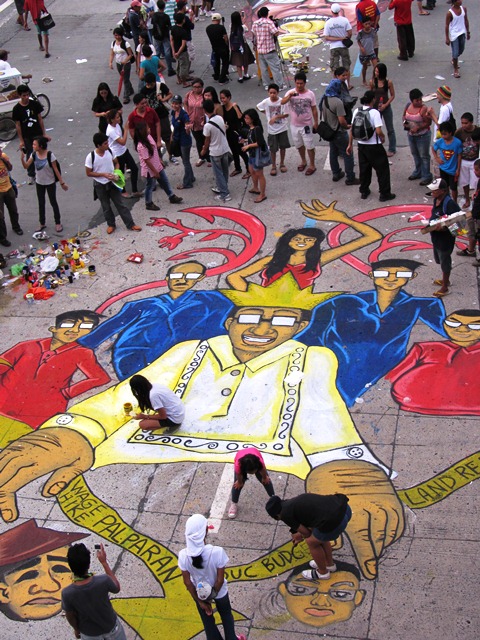 “As with the previous Arroyo regime, the people are once again pushed as far away from Batasang Pambansa as possible,” said Renato M. Reyes Jr., secretary-general of Bayan. Lawyers who joined the Peoples’ SONA explained that all the barricades put up by the police and soldiers and firemen blocking the protesters’ march to Batasang Pambansa were “illegal,” unless the law’s permit requirement is just an excuse.

The peoples’ SONA participants had “duly complied with the procedural requirements for their planned protest actions and timely applied for a permit to stage the same,” said Edre U. Olalia, secretary-general of National Union of Peoples’Lawyers (NUPL).

The Aquino regime thinks highly of itself but it can’t even follow the Constitution and its own Public Assembly Act, said Reyes of Bayan. Nearly a hundred protesters including three media workers had been hurt in tensions that broke out between the police and the protesters, who had tried to march through the police barricade to the Batasang Pambansa as early as six in the morning.

Aquino’s improved economy: no longer a joke but a farce

Aquino’s 90-minute speech, said to be one of the longest SONAs in recent memory, highlighted achievements that progressive groups shot down either as just a deception, a half-truth at best, or simply meaningless. Among others, “Aquino’s ‘achievements’ consisted of an S & P credit upgrade, a rise in stock market, some record gross international reserves, a loan extended to IMF – all quite meaningless to ordinary Filipinos facing high prices, low wages and landlessness,” said Renato Reyes Jr., secretary-general of Bayan (New Patriotic Alliance).

President Aquino expounded on the gains made by his administration in the delivery of education and health services. “What he did not mention is that these services are increasingly being provided by professional teachers and nurses working as highly exploited contractuals. Under his presidency, the Department of Education has deployed over 20,000 contractual teachers and 10,000 contractual nurses who are paid below minimum wage,” said ACT Teachers Partylist Rep. Antonio Tinio.

The country’s maternal mortality rate has gone up to 221 for every 100,000 live births from 162 in 2006. “More women are dying of preventable childbirth complications. On a larger scale, more and more women and children are dying of easily preventable and curable illnesses because Aquino’s PPP has made healthcare a luxury,” said Lana Linaban, secretary general of Gabriela Women’s Party.

Besides, the most important sector that generates more jobs is agriculture, but, according to independent think-tank Ibon Foundation, agriculture under Aquino experienced a 2.4-percent drop – from 7.3-percent to 4.9-percent.

Against data from research groups that joblessness is getting worse, Aquino boasted that under his presidency, unemployment rate is declining. But the sector who ought to feel that trend first happens to be the most vehemently critical. “Being fed with lies about development and growth is even more revolting for poor people who have nothing to eat,” said Elmer “Bong” Labog, chairman of Kilusang Mayo Uno (KMU). He said that if there had been additional jobs, these are largely low-quality, low-paid contractual jobs.

Both the youth and the workers criticized Aquino’s K + 12 program as nothing but a method of readying cheap labor before they enter the labor market.

Aquino’s projected over-spending on infrastructure is not something to crow about either, because these are “designed mainly for tourism and for multinational companies and are not intended to support land reform and national industrialization, thereby creating only very limited employment,” said Jorge “Ka Oris” Madlos, spokesman of National Democratic Front of the Philippines-Mindanao, in a statement.

KMU said the condition of workers and the poor has worsened under Aquino, as the real value of wages continues to plunge and contractual labor continues to become more rampant. In the National Capital Region where minimum wages are nominally the highest, Ibon said it has actually shrunk to just 44-percent of the Family Living Wage, compared to being 53-percent ten years ago.