“It was so easy for the Aquino administration to let Arroyo get away with her crimes while political prisoners continue to languish in jail.” – KMU

“We condemn the granting of bail to Gloria Macapagal Arroyo, criminal mastermind of election fraud in 2007, as well as the election prior to that. While we are definitely upset at this development, we are not surprised. This may well have been the result of the rushed case filed in November last year to prevent Arroyo from leaving the country as the Supreme Court upheld its restraining order on the DOJ (Department of Justice) travel ban,” said Renato M. Reyes, Jr., secretary general of Bagong Alyansang Makabayan (Bayan).

Arroyo has been under hospital arrest since November 2011 for alleged electoral sabotage.

The case of election sabotage brought before the Pasay court was the result of a joint probe by the Commission on Elections and the Department of Justice. The case was filed to pre-empt the Supreme Court’s decision upholding its temporary restraining order against a travel ban imposed by the DOJ on Arroyo. At the time, with Aquino already 500 days in office, no case against GMA had yet been filed in court to justify a travel ban. 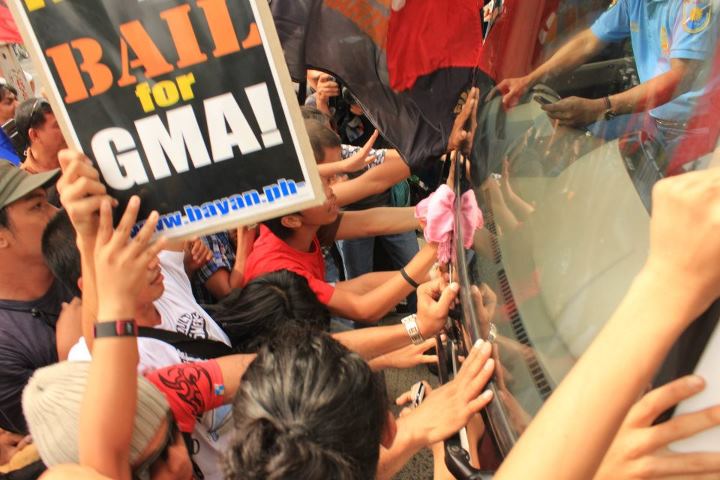 According to news reports, the prosecution “failed to establish with the required quantum of proof, that conspiracy exists on the part of accused Arroyo.”

Reyes then countered, “There is no doubt in our mind that Arroyo should indeed be liable for election sabotage in 2007. However, the Aquino government should explain why the rushed case filed before the Pasay RTC was apparently weak, thus enabling Arroyo to be granted bail.”

Meanwhile, Anakbayan blamed Aquino for not filing stronger cases against Arroyo. “Aquino should be held accountable if Arroyo is out on bail. His government has failed to file strong cases of plunder and human rights violations against Arroyo and even gave her special treatment in the form of hospital arrest,” the group said in a statement.

The group added that despite the complaints filed against Arroyo before the Ombudsman, the Aquino government still has not filed strong cases against Arroyo such as her involvement in the corruption-ridden NBN-ZTE deal, human rights violations and cases related to the Hello Garci tapes scandal.

“The impending Arroyo escape days after Sona shows how hollow and empty the anti-corruption and good governance rhetoric of the Aquino government is. We ask him: ‘What happened to your assertion during your Sona? Is this not just forgive and forget?’ ”

“The granting of bail to Arroyo underscores the need to file more cases, stronger cases against the former president: ranging from the 2004 election fraud, human rights violations, as well as other cases involving plunder. That is the only way to ensure that she is made truly accountable,” Reyes said.

Reyes enumerated cases filed by different cause oriented groups against Arroyo such as, the NBN-ZTE scam, the PCSO (Philippine Charity Sweepstakes Office) scam, as well as civil cases for the arrest and torture of the Morong 43. 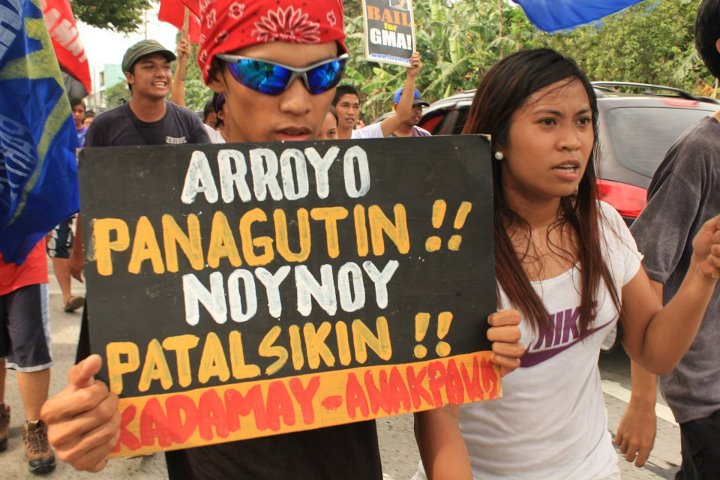 Meanwhile, Elemer Labog, chairman of Kilusang Mayo Uno (KMU) said Aquino fooled the people. “In his third state of the nation address, he pretended to be firm in holding Arroyo accountable for her crimes.”

Bayan held a protest action at the Pasay RTC to oppose the granting of bail to Arroyo.