What happened to the ‘Hello Garci’ protagonists?

They have all been rewarded and chances are, they would be able to get away with it.

MANILA – For the main cast of the “Hello Garci” election scandal, life has so far been as nearly happily-ever-after as it could be. The main protagonist and beneficiary, the former president, or the disputed president, Gloria Macapagal-Arroyo, plus her immediate family, had grown wealthier based on both their official declaration and other reports coming out about the increased family net worth and properties.

They have also held on to political power – Gloria Macapagal-Arroyo is currently a Pampanga representative. She reportedly has supportive and powerful allies in congress who continue to shield her and tell critics to give her “parliamentary courtesy,” and, many suspect, she likely has influence too over the judiciary whose justices she has largely appointed. Gloria Macapagal-Arroyo’s two sons and brother-in-law have also remained as congressmen.

Despite the lingering questions about the legitimacy of her presidency and the numerous attempts to unseat her, Arroyo went on to finish her term as the second longest sitting president. The only problem, it seemed, is the seeming continuous need for further cover-up operations of what a mutinous soldier has described as “the original sin”— her stealing the presidency in the 2004 elections. 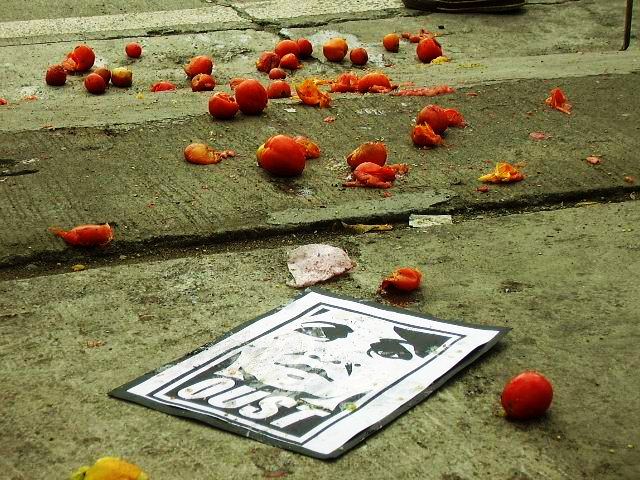 Rotten tomatoes for a rotten president – from protesters in Iligan City in 2008.(Photo courtesy of arkibongbayan.org / bulatlat.com)

What became of the other cast of Hello Garci

The Ampatuans -Unlike the Arroyos who mainly benefited from the election rigging, life has not turned out as sweetly for some of their trusted operators in the crime. The Ampatuans, for example, who used to lord over Maguindanao and ARMM, have found themselves in jail after allegedly massacring 58 people, mostly media workers, in Ampatuan, Maguindanao on November 2009. These areas largely figured in vote-padding and vote-shaving in 2004, according to Hello Garci tapes.

Some of the Ampatuan’s are still in jail and one of them, Zaldy Ampatuan, former governor of the Autonomous Region of Muslim Mindanao (ARMM), was aired on at least three TV networks last month angling for freedom in exchange for revealing who masterminded the massacre and later on, exposed Arroyo’s election fraud.

Recall that when the Ampatuan’s mansions were searched in the weeks that followed the Maguindanao Massacre, media cameras showed piles of unearthed election returns and certificates there. But critics said these were buried again in the news by the state of emergency imposed on the province by then President Gloria Macapagal-Arroyo.

Today, the Ampatuan’s power as a warlord clan has reportedly only diminished but not yet broken. Human rights advocates said the long period of time it took for the then Arroyo government to search the Ampatuan houses and freeze their bank accounts had helped the clan hide some of their arms and other loot.

Hearings on the Ampatuan massacre have also continued to be delayed.

Perceived as ‘guilty’ in the Comelec

Benjamin Abalos – He is a Wack-wack golfer who reportedly wins million-peso tournaments, one of which he claimed he once used to finance a trip for Comelec window-shopping in South Korea.

During his chairmanship of Comelec from 2002 to 2007, the poll body was involved in headline-grabbing controversies. For example, two multi-million dollar worth of deals on election computerization had to be scrapped due to alleged anomalies. The 2004 and 2007 elections during his term itself were highly contested and investigated, up to now.

But it was not the Hello Garci or the Bedol scandals, both election-related and under his watch, that had prompted Abalos to resign from the poll body in 2007. It was his alleged role in brokering the National Broadband Network (NBN) deal with ZTE, where the Arroyos largely figured, too, in exchange for fat commissions. The ZTE of China had reportedly advanced some of the commissions.

Critics said Abalos resigned also in a bid to control the damage done by the NBN-ZTE scandal on Arroyo. Abalos now operates a burger restaurant, where he told the media during the launch that here at least he was the one doing the grilling. His son and namesake, Benjamin Abalos Jr., is currently the mayor of Mandaluyong City.

Abalos has recently distanced himself from Lintang Bedol’s allegations. He also warned the public against what Bedol had to say, echoing the recent actions of former PNP chief Hermogenes Ebdane. The latter was reported and complained by whistle-blower cops as responsible for harassing and maligning them recently in a bid to water down their testimonies.

Lintang Bedol – He was the former election supervisor in Maguindanao. Bedol reemerged last month from four years of hiding (from summons of investigative bodies) in what seemed like an effort to corroborate jailed Zaldy Ampatuan’s statements on Arroyo’s poll fraud in 2004 and 2007. He is now reportedly under the protection of Interior Secretary Jesse Robredo, who reportedly belongs to the Balay faction within the Aquino adminstration.

After a meeting with Comelec officials in July 19, Bedol was whisked away ostensibly to serve a six-month jail term for ignoring summons to a poll hearing in 2007. He recently submitted an affidavit focusing on what happened during the elections in 2007 rather than the 2004 presidential elections, noted the present Comelec chief, Sixto Brillantes. The affidavit was accompanied by sworn statements from three municipal election officers in Maguindanao.

In a recent ABS-CBN broadcast of an interview with Bedol in the back seat of a vehicle, the former poll official accused Arroyo, now a Pampanga representative, of masterminding the rigging of the 2004 and 2007 elections. This echoed the accusations aired earlier by Zaldy Ampatuan.

Prior to his resurfacing last month, earlier probes on election frauds have determined that Bedol had illegal possession of election documents after the 2007 polls. Along with his failure to attend hearings, his disrespect of the Comelec during media interviews, and his boasting of having high-powered firearms, these earned him a citation for indirect contempt and for that a six-month jail sentence.

It is not yet clear whether the Aquino government would unearth how Bedol had managed to hide for four years. Along with Zaldy Ampatuan, he is even being considered as a state witness.

Virgilio Garcillano – The guy whose shortened name has lent itself as title of this long-standing controversy, also resurfaced recently, looking like he had never been gone, from an eye-catching big house in the middle of an eleven-hectare farm in Baungon, Bukidnon.

A former Comelec commissioner, Virgilio “Garci” Garcillano is being accused as the alleged architect of an operation to manipulate the results of the 2004 presidential election in favor of then President Gloria Macapagal-Arroyo.