You Are Here: Home → 2012 → August → 17 → Relocation site at Kasiglahan Village submerged in floods

When they agreed to be relocated from Isla Puting Bato, they were thinking about their safety and the future of their children. The rampaging floodwaters from La Mesa dam last week washed away whatever security they felt when they first transferred here.

RODRIGUEZ, Rizal – When Gemma Lasala was still young, she swam with her playmates in Manila Bay for fun. Now 30, Lasala did not know her skill would save her life and the lives of her children.

Lasala was born and raised in Isla Puting Bato in Tondo, Manila. They were among the families who lost their homes in a fire last May 11. Her family did not get a chance to save any of their belongings. In July, they relocated to Kasiglahan Village, where many urban poor families from so-called danger zones all over Metro Manila, have been transferred.

The National Housing Authority, Lasala said, promised they would be transferring into a better community. Her husband, Gerry, a vendor in Divisoria, told her if they saved money, they could somehow afford the monthly amortization, which starts next year at $4.8 a month. The amortization will rise every year.

“We did not have money to buy wood and galvanized iron sheets to rebuild our homes [at Isla Puting Bato],” she said, adding that when the offer to relocate came, they agreed to go. “We can also pass it on to our children since it would eventually be ours,” she added.

But their dreams of finally rebuilding their lives from the fire were shattered by heavy flooding brought about by the recent monsoon rains.

“Why did we end up here?” she said. “They said we would be safe here. Our homes would be made of cement. But just a few days after we moved here, we were submerged in flood water,” she added.

“They even said we would have decent bathrooms. Who would have thought that this would happen to us?”

Around 6:00 a.m., her neighbor knocked on her door, saying that they need to evacuate immediately as the La Mesa dam would soon release water. A river, which stretches near their house, was reportedly where water would flow from the La Mesa dam and the nearby Wawa dam.

“I just closed the door to get my children and when I opened it again, the flood water was already knee-deep,” Lasala said, “The flood went immediately inside our house.”

She and her three children started to walk into the flood water to get to the entrance of the village. While getting to safety, they stumbled upon another child who was looking for her mother. Lasala tagged the child along with them. With four children and their pet dog clinging into her, they waded through the flood water. 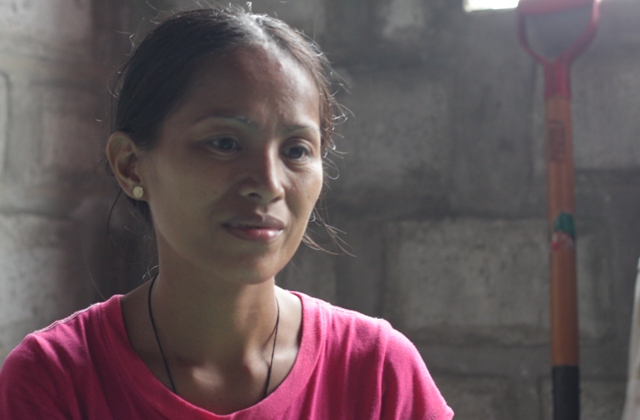 A village security guard saw them. Lasala asked him to bring the children to safety. She, on the other hand, swam for two hours, which on ordinary days would only take a 30-minute walk. Lasala held on to the walls of rows of houses so she would not be carried away by the strong current of the water.

Lasala considered herself lucky because she grew up near Manila Bay back in Tondo, Manila. But other relocatees who came from other places did not have an easy time wading and swimming in the flood water. She is thinking of teaching others how to swim in the near future, which, she said would come handy in surviving in the village.

Her neighbor, Maria Lourdes Salceda, 39, also came from Isla Puting Bato. Their house in Tondo was also burned last May 11. When they were relocated to Kasiglahan Village, they were assigned to a unit that stands near the river dike, which was destroyed by the strong water current during the monsoon rains.

Salceda moved to safety in the morning. But her brother-in-law, Antonio Salceda, 36, and her brother, Marlon Simbahon, 14, stayed behind to save their belongings. But they were eventually stranded because the flood water rose too fast. They stayed at the roof of their house for seven hours and they were rescued at around 2:00 p.m. 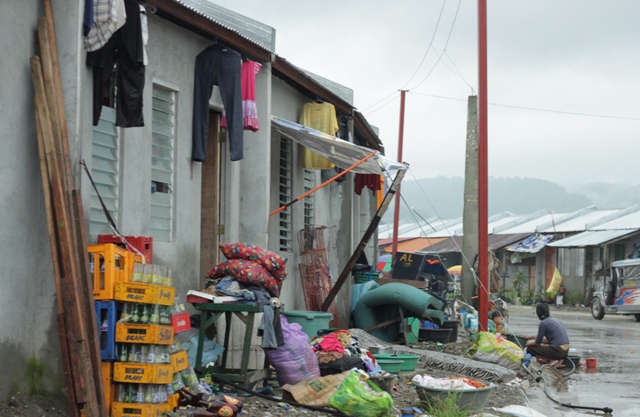 Nothing is back to normal at Kasiglahan Village.(Photo by Ronalyn V. Olea / bulatlat.com)

The two were eventually brought to safety but with injuries. Antonio sustained a wound on his right leg. He was hit by the metal that supports their roof. Marlon, on the other hand, was cut by a galvanized iron sheet.

Both Lasala and Salceda’s family are staying in vacant houses of the village near its entrance. The NHA personnel told them they need to return to their units soon because these units, though currently vacant, already have owners who would be coming from Quezon City.

“I do not want to go back to our house,” Lasala said, adding that her husband, Gerry, in fact, is thinking of going back to Tondo, Manila.

No sincere projects for the poor

In his Facebook account, Carlito Badion, vice chairman of urban poor group Kalipunan ng Damayang Mahihirap (Kadamay), posted 41 photos of houses and residents living in Kasiglahan Village at the height of the flooding.

Badion also criticized Chito Cruz, the general manager of the NHA, on the kind of study that the government agency made before transferring the urban poor to that relocation site. “Since Kasiglahan Village was constructed, it gets flooded easily,” he said.

“We will not transfer you to a dangerous place,” Badion said, quoting Cruz in one of their dialogues. “What do you now call the condition of the urban poor who were forcibly relocated in a miserable housing facility like Kasiglahan?”

According to a special report by GMA News TV’s State of the Nation, Kasiglahan Village was formerly a stream that was reclaimed. “Landslides have been reported in Kasiglahan Village in Rodriguez, Rizal. Upon inspection, drainage systems were not properly designed,” the news program posted in its official Twitter account.

“My friends back in Tondo do not want to be relocated anymore after seeing what happened to us. They said they might drown here,” Lasala said. “I told them not to go here because they might be carried by the strong flood currents.”

In his speech at the Kasiglahan Elementary School last Sunday, Aquino blamed the families living near the river. “He was the one who brought them to a dangerous place when their houses were demolished and now he is blaming them,” Badion said.

And while residents are having difficulties at Kasiglahan Village, more urban poor families residing along waterways, which the government calls “danger zones,” are facing threats of demolition and relocation to places progressive groups refer to as “deadly zones.”

In a Interaksyon.com report, Public Works secretary Rogelio Singson said the government will forcibly relocate some 195,000 families living along waterways, where 125,000 live in Metro Manila and 70,000 in Laguna de Bay.

“I just received instructions from the President that if push comes to shove, we will have to blast these houses,” Singson said, adding that relocating “needs very strong political will.”

“Local government units should not allow families from taking residence in (or along) waterways within their jurisdiction,” Singson said.

Badion was furious. “The poor have been relocated to places such as in Rodriguez, Rizal and Meycauyan, Bulacan. Their houses have been submerged in water. You call that safe?”

Badion, also convenor of Alyansa Kontra Demolisyon, asked, “What about the private malls, condominiums and buildings which experts have identified as causing floods? Why is there no order to blast these facilities?”

Badion accused Aquino of exploiting the floods for his Public-Private Partnership programs, which, he said, will “benefit big business interests.”

“Instead of carrying out measures that will resolve poverty, this government wants to destroy our homes. This only shows how anti-poor Aquino is,” Badion said.

In a separate statement, Akap Bata party list said that instead of taking responsibility for the devastation caused by the floods, Aquino resorted to blaming the poor and early campaigning.

Lean Flores, Akap Bata spokeswoman, said the roots of the problem are aggressive mining and urban development. “The problem of flooding is simple. If you cut down the trees and denude the mountains, you have nothing to absorb the rain water. The water will go directly to urbanized areas in the form of flood,” she said.

“The use of threat and force to relocate people as suggested by President Aquino clearly shows incomprehension and indifference to the real reasons why poor people risk living in dangerous and disaster-prone areas like waterways,” Bautista said.

Bautista added that the Aquino government wants to remove these poor people yet providing no housing or livable resettlement areas, alternative livelihoods, and financial support.

The environmentalist group said that while Aquino boasts of a supposed master plan to address flood risks, he has failed to put a stop to development aggression activities that further destroy watersheds and other ecosystems that regulate floods and other hydro-meteorological disasters.

“Large-scale mining corporations have been exempted from standing log bans, and mining applications that cover vast tracts of forests have been validated by the new mining executive order. Meanwhile, magnetite mining and reclamation projects further erode our coasts and destroy our mangroves and other natural buffers against storm surges,” Bautista said.

For families like Lasala and Salceda, the struggle for daily survival continues.

Lasala said they rely on dole outs and loans to be able to eat each day. Her husband could not leave the house for fear that floods would come again. Salceda, meanwhile, sells whatever is left from her variety store.

Their experiences taught them lessons. “If the flooding would happen again, I will really join protest actions,” Lasala said. “We did not die from fire but we might get drowned here.”

“If the government wants to relocate us, we should be transferred to a place that is really safe. Besides, the house is not for free and the government asks us to pay for it. We should not be living in a place where we would be carried by the flood water,” Lasala said.