“As it turned out, the price freeze was just meant to temper public outrage over the shameless greed displayed by oil firms after hiking petroleum prices during the height of the flooding and devastation brought by the monsoon rains. In the end, oil firms simply could not moderate their greed.” – CAOPI

MANILA — The multisectoral group Coalition Against Oil Price Increases (CAOPI) slammed the attempts of oil companies to justify their move to impose “retroactive” price hikes after the massive flooding that hit the National Capital Region (NCR) and other Luzon provinces two weeks ago.They previously laid down a price freeze in areas affected by massive flooding due to torrential monsoon rains that hit the capital as well as portions of Laguna, Rizal, Zambales, Bulacan, Pampanga and Bataan.

Pilipinas Shell, Total Philippines and other oil firms increased the price of their premium and unleaded gasoline by ?1.80 ($.043) per liter; regular gasoline by PhP1.70 ($.0404); kerosene by PhP1.60 ($.038); and diesel by PhP1.50 ($.035). Still unsatisfied, they also said that consumers and motorists should expect another round of increases soon after, supposedly to reflect the impact on domestic pump prices of last week’s global price movement.

CAOPI said oil companies will not just recover supposed foregone revenues due to the price freeze but will even likely earn more because oil demand last week could be smaller than normal due to the floods. It said that as petroleum demand normalize after the floods and the lifting of the state of calamity in Metro Manila and other provinces, oil firms stand to rake in more profits as they pass the full impact of last week’s deferred price hikes on top of this week’s scheduled price increases. 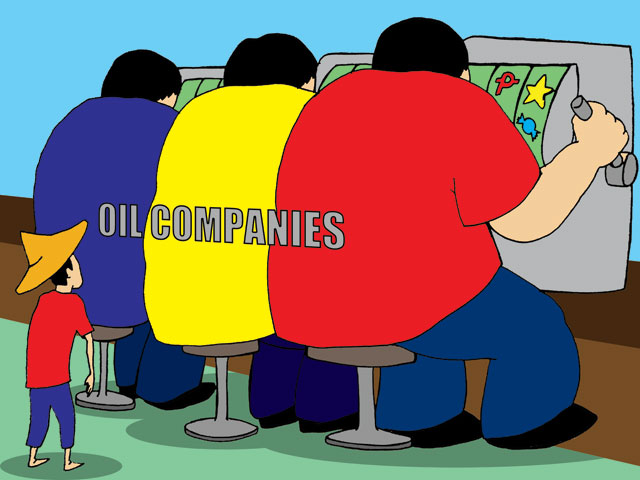 High-stake speculation or gambling thru oil futures and free rein at price-setting thru a deregulated oil industry, are some factors blamed for oil overpricing. (Illustration by Flon Faurillo / bulatlat.com)

The oil price monitoring group questioned the Benigno Aquino III government’s failure to conduct an independent review and investigation on the abuses in the pricing of petroleum products. It also asked other independent groups who promised to come up with reviews to release their findings.

One such review panel is led by former Budget Secretary Benjamin Diokno, and it was was supposed to come up with findings last July on allegations that oil firms were overpricing their products. The panel vowed to look into allegations of “excessive profits” of oil companies. In May, Diokno announced that the panel has already finished between 60 to 70 percent of its work to determine whether oil prices in the Philippines are reasonable. The results of the review have not been made public so far.

Groups such as the Bagong Alyansang Makabayan (Bayan) have asserted that petroleum products imported by the Philippines are overpriced because of a combination of monopoly pricing by the international cartel and price speculation by commodity traders. Bayan has also alleged that besides bloated world prices, domestic price movements have been steeper compared to international price movements.

For its part, the Anakpawis party-list said the price freeze the oil companies imposed during the height of the monsoon floods was a failed publicity stunt.

“These same oil firms implemented price hikes while torrential rains swamped Metro Manila and nearby provinces. Implementing a price freeze in the midst of a calamity should mean the firms were ready to sacrifice revenues for humanitarian considerations. Now they’re raising prices again by as much as P3.00 ($.071) ,” said the group’s vice chairman Fernando Hicap.

“Firms did not even incur serious losses over a few days of price freeze. Mere cuts in their revenues should not be considered as shortfalls to recover. Many areas are still in distress. With this new round of hikes, these firms actually aim to amass bigger profits by taking advantage of the vulnerability of consumers.”

In Congress, Anakpawis Rep. Rafael Mariano has consistently pushed for the repeal of the Oil Deregulation Law. Progressive lawmakers also proposed the reduction, removal or suspension of VAT on oil products as an immediate government response to lower prices of oil products.

CAOPI said the retroactive increases defeated the purpose of the price freeze implemented by the oil firms, which was supposedly done in the spirit of sacrifice and sharing the burden amid a calamity.

“As it turned out, the price freeze was just meant to temper public outrage over the shameless greed displayed by oil firms after hiking petroleum prices during the height of the flooding and devastation brought by the monsoon rains. In the end, oil firms simply could not moderate their greed, ” said CAOPI.

What’s worse, the group pointed out, is that oil companies can very well absorb the impact of the price freeze without incurring financial losses as they claimed because petroleum products are overpriced internationally and domestically.

The group renewed its demand for Congress to repeal the Oil Deregulation Law so that government can more effectively intervene in setting the prices of petroleum products and deal with the abuses of the oil companies, not only during times of calamities but on a regular basis.

Bayan Muna Representative Teddy Casiño, in the meantime, is calling on the government to mitigate the price shock by reducing the value added tax on oil from 12 percent to six percent.

“Even if the industry is deregulated, the government can do something to mitigate prices by reducing the taxes on oil, specifically the VAT, just like they do in other countries that have lower VAT rates for basic utilities and products,” Casiño said.

He called the oil companies “cruel” because people in Luzon are still recovering from the other week’s massive flood “and all oil companies are thinking of is how to jack up their profits.”

The lawmaker called on Malacañang and the House leadership to immediately approve measures removing or reducing the value added tax (VAT) on oil in order to prevent government from collecting windfall VAT revenues.

“The P3 planned increase by oil companies plus the preceding increases in the price of oil supposedly due to higher oil prices abroad will result in unfair and immoral windfall VAT revenues unless we remove or reduce the tax,” he said.

The government collects additional revenues from the VAT from unplanned increases in the prices of goods and services subject to VAT. Casiño said the VAT windfall is “an added misery to Filipinos already subject to artificially high prices of power and oil.”

“I am also calling on Malacañang and the House leadership to approve House Bill 6416, which aims to cut VAT rates by half in the prices of oil, power and water,” he added.

Casiño’s bill aims to reduce VAT to six percent for electricity, water services, and oil and petroleum products, in order to provide immediate relief to consumers and the domestic economy. The 50 percent reduction of the VAT rate will bring down prices of oil products by as much three (3) pesos per liter, electricity rates by at least 38 centavos per kilowatt hour (kWh) for lifeline electricity users and at least 50 pesos in the bills of residential water users.