MANILA – Grace Morales, wife of Rosell Morales and sister of Marites Cablitas, two of the 58 victims of the Ampatuan massacre, is disgusted with the temporary freedom of former president Gloria Macapagal-Arroyo, now representative of Pampanga’s second district.

Although Morales deemed that Arroyo had no direct participation in the November 23, 2009 massacre in Ampatuan town, Maguindanao, she said the electoral sabotage case against Arroyo is undoubtedly linked to the massacre.

“The Ampatuans were brazen because they knew they had political backing. They are Arroyo’s men,” Grace said in a phone interview with Bulatlat.com.

Zaldy Ampatuan, former governor of the Autonomous Region in Muslim Mindanao (ARMM), his father Gov. Andal Ampatuan Sr., former Maguindanao governor are the primary suspects in the carnage that claimed the lives of 58 individuals, of whom 32 are journalists.

“The Ampatuans are a creation of Gloria [Arroyo],” Prima Jesusa Quinsayas, lawyer of the private complainants, told Bulatlat.com in an interview. “As one of the relatives said, Arroyo closed one eye to the growing power of the Ampatuans all because she wanted a 12-0.”

Quinsayas was referring to the 12-0 votes in favor of Team Unity candidates of the then Arroyo administration.

In November 2011, the joint panel of the Commission on Elections and Department of Justice committee filed charges of electoral sabotage against Arroyo, Andal Ampatuan Sr. and former Comelec official Lintang Bedol at the Pasay City Regional Trial court.

The complaint cited that a few days before the 2007 election day, Arroyo personally instructed accused Andal Sr to ensure a ‘12-0’ victory for the senatorial candidates of the Team Unity during a dinner meeting in Malacañang Palace. Andal Sr. in turn instructed Bedol who was then the chairman of the provincial board of canvasser of Maguindanao.

Arroyo was detained last December. On July 25, Arroyo was released from her detention room at the Veterans Memorial Medical Center (VMMC) after posting a P1 million ($23,800) bail. 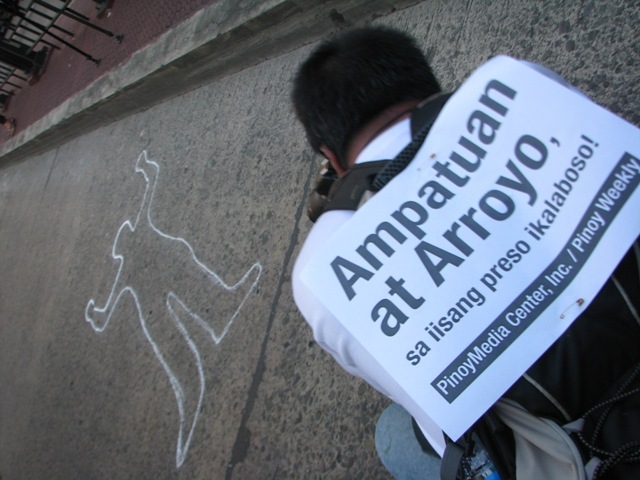 “I know she has the right to bail but as a relative of those who were killed, I am frustrated,” Grace said. “Criminals in this country are freed. I just hope she will not be allowed to go abroad.”

In July 2011, Zaldy volunteered to be a state witness against Arroyo. In an unsigned statement, Zaldy claimed that Arroyo and her husband Jose Miguel Arroyo had ordered his father to rig the 2007 senatorial elections.

Relatives deemed it is Zaldy’s attempt to get off the hook in the massacre case.

Norie Unas, former chief-of-staff of Andal Sr. and whom eyewitnesses identified as among those who planned the massacre, is already admitted as a state witness to the electoral sabotage case against Arroyo.

Quinsayas said that Unas is technically not a suspect yet when eyewitnesses identified him in open court as among those who colluded with the Ampatuans. Even before they could file a separate complaint against Unas, the Comelec admitted him as star witness.

Still, bail was granted to Arroyo with the presiding judge stating that there is no strong evidence against Arroyo.

Quinsayas said the prosecution miscalculated the weight of their evidence. “And it’s a costly miscalculation,” she said.

“Aquino has given a more explicit order regarding the case against Arroyo [compared to the Ampatuan massacre case]. He said, ‘Make her pay.’ It is debatable as to whether his legal team is able to execute that effectively,” Quinsayas said.

Quinsayas said she hopes Aquino will treat the Ampatuan massacre case with the same “Get them” attitude.

In a statement, Gabriela Women’s Party Rep. Emmi de Jesus said, “The Ampatuan massacre symbolizes the evil alliances of political dynasties and how they can embed themselves into power to exploit the country.”