You Are Here: Home → 2012 → August → 29 → Privatization of government hospitals, further marginalizing the poor in the name of profit

Privatization of government hospitals, further marginalizing the poor in the name of profit

The costs of health services in earlier corporatized government hospitals such as the Philippine Heart Center, the Lung Center of the Philippines (LCP), National Kidney Transplant Institute (NKTI) and Philippine Children’s Medical Center (PCMC) belie the government’s claim that privatization will lead to more “accessible and affordable health care” for the poor.

MANILA – Eleven-month old Brienna has a lump in her nerve connected to her spine. The doctor said the lump should be immediately removed so that she could walk. The surgery would cost from P30,000 to P40,000 ($697 to $930), said his father Melvin Navarro, 36. They were among the long line of out-patients in the Philippine General Hospital (PGH) waiting to consult a doctor.

Navarro said they opted to transfer to PGH because they have spent their savings and even loaned money for Brienna’s MRI in a private hospital. They spent around P50,000 ($1,162). “We transferred here in PGH because they have specialists and because it is a government hospital, we thought the operation will not be expensive. But we realized we were wrong when the doctor told us the cost for my daughter’s operation,” Navarro said in an interview with Bulatlat.com.

Navarro is a minimum wage earner. His wife, on the other hand, is a freelance beautician who does home service such as hair rebonding. Their doctor advised them to seek financial assistance from the Philippine Charity Sweepstakes Office (PCSO). However, they still have to loan money for Brienna’s operation because the processing of requests for financial assistance for medical expenses at the PCSO takes a long time.

Navarro is only one of the many patients who are being deprived of affordable and accessible health care services. The situation would be worse as the government aggressively pushes for the privatization and corporatization of public hospitals.

According to the Network of Opposed to Privatization (NOP), the government is slowly turning its back on the Filipino people. Under the administration of President Benigno S. Aquino III, the budget for the health sector is shrinking. In the 2013 budget, the proposed budget for the Department of Health is P56.8 billion ($1.35 billion). According to Gabriela Women’s Party (GWP), this represents a mere 1.89 percent of the Gross Domestic Product (GDP). The Aquino administration will only spend a measly P0.62 ($.0014) per Filipino in 2013. 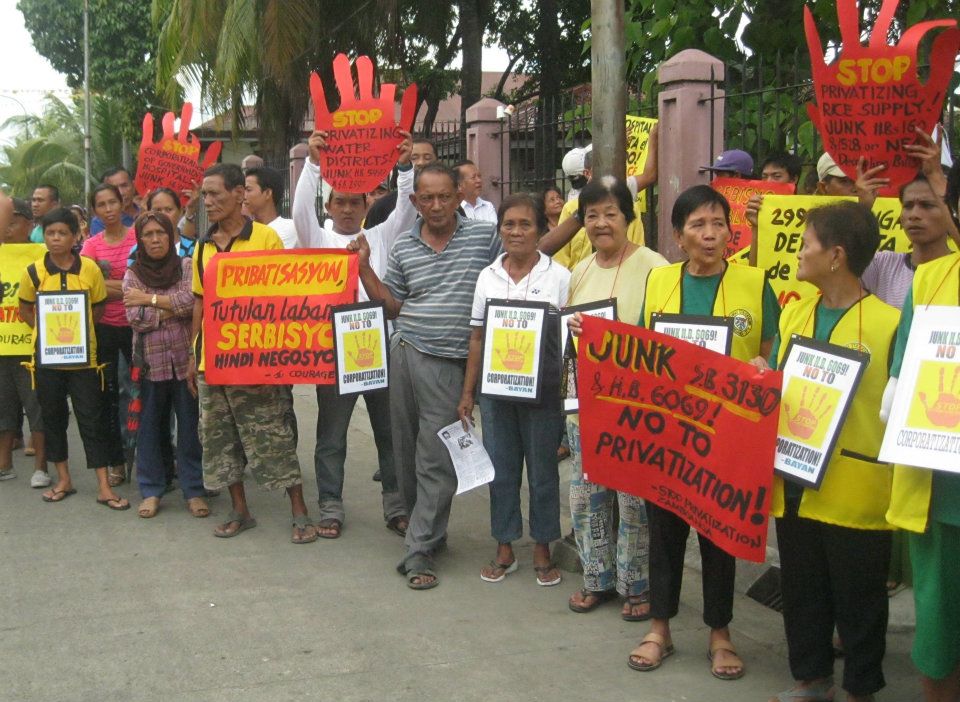 Members and patients under the Alliance to Stop Privatization held a picket rally in front of the Zamboanga City Medical Center last July 23 condemning HB 6069 and SB 3130 seeking the conversion of 26 government-run hospitals into Government-Owned and Controlled Corporations.(Photo courtesy of Alliance of Health Workers / Bulatlat.com)

The World Health Organization (WHO) recommends that governments allocate budgets for health equivalent to at least five percent of its GDP). However, the current, as well as previous administrations, allocate less than five percent of the GDP. For the current year, the government allocated P42.76 billion ($994 million) while it should have allocated P487 billion (P11 billion), if it would follow the recommendation of the WHO.

Health groups said the government allocates a low budget for health while pushing for the privatization and corporatization of public hospitals, thereby passing its responsibility to the private sector to improve its services and facilities. An average of three of the seven members of Boards of Trustees of government owned and controlled hospitals are from the private sector to be able to design and implement schemes for hospitals to generate more income. This is strongly opposed by health groups and other people’s organizations.

Dr. Julie Caguiat, convenor of the NOP, said that under the Aquino administration, the government has blatantly abdicated its responsibility to provide free health care services to the people by privatizing health care services and railroading the legislation of corporatization of 26 public hospitals.

“The government gradually reduces its allocation to health services; one glaring example is the non-allocation of funds for maintenance and other operating expenses of public hospitals and the zero budget for capital outlay.”

The adverse effects of privatization

Robert Mendoza, secretary general of Alliance of Health Workers (AHW), cited the Philippine Heart Center (PHC), Lung Center of the Philippines (LCP), National Kidney Transplant Institute (NKTI) and Philippine Children’s Medical Center (PCMC) as corporatized hospitals, the services of which are not accessible and not affordable to poor patients.

According to AHW data, diagnostic procedure in NKTI like HbA1C (test for blood sugar) is more expensive (P600 or $13) compared to the Capitol Medical Center (P400 or $9). Hemodialysis is also more expensive compared to private dialysis centers. Its modern and new medical equipments are too expensive for indigent patients who are in need of NKTI’s services.

In 2008, former Bayan Muna Rep. Satur Ocampo cited the case of Celso Panisa who died because he was not admitted at the NKTI. Panisa had fluids in the cavity of his lungs. The admitting nurse asked for P10,000 ($232) as down payment for the necessary procedures. Panisa’s companion only had P2,000 ($46) with them. They pleaded but the admitting nurse remained firm. They went home and Panisa died without being treated.

In 2011, at the PHC, more than 1,600 patients failed to undergo operations because they could not afford it. By 2010, the number of allotted charity beds at the PHC went down to a mere 20 percent of the total bed capacity from 70 percent when the hospital was established in 1975. Health services are not 100 percent free at the PHC. Class C or D patients need to shell out several thousands up to hundreds of thousands of pesos for procedures or operations.

At the LCP, only the services of the doctors are free while all equipment, medicines, food and rooms have to be paid by Class D patients. Consultations in the out-patient department are also not free.

At the PCMC, poor patients are forced to seek treatment as paying patients because it is difficult to access charity services. No extra beds are readily available in the charity wards. “An initial P5,000 ($116) deposit is needed before a patient is admitted, if they do not have it at the time of admission, they have to produce it within 24 hours,” Mendoza said.

Patients are forced to pawn their properties or anything that has value, so that they will be discharged by the hospital. The PCMC director admitted in 2011, during a pre-plenary budget hearing, that many of their service patients cannot pay their hospital bills. In 2011, the PCMC had to accept promissory notes from 73 percent of its service patients.

Aside from increasing its rates for services, corporatized government hospitals open its doors to all kinds of businesses and provide commercial spaces for rent. This is what is now happening at the PHC, LCP and in NKTI. Food at the privately-run canteen at the NKTI is very expensive. At the emergency room of the LCP, hospital personnel are instructed to strictly collect fees from patients for the use of medical equipment and paraphernalia.

Last June, the Philippine General Hospital Board of Regents approved the new class D rates for the underserved and underprivileged patients of the PGH. Class D patients are classified by the Medical Social Services as the poorest among the charity patients.

According to Benjamin Santos, Jr., president of All UP Workers Union-Manila, said that based on the newly-approved rates, only 12 of the 192 basic service examinations will be free of charge. The rest will be considered as special tests and corresponding fees will be charged.

Among the 12 basic services are: CBC with differential count, Hematocrit or Hct, platelet count; routine manual urinalysis; routine fecalysis; FBs or fasting blood sugar, Na, K, Cl, Crea; chest x-ray (post anterior or AP) or any two plate examinations and ECG or electrocardiogram. X-ray services, which used to be free, will have a corresponding fee. Once the patient avails of any of these services, the subsequent requests for service examinations will be subjected to the screening and recommendation of the Chief Resident and approval by the Office of the Deputy Director for Health Operations (ODDHO). “This will mean that the next request will not be free at all,” Santos said.

“There was no consultation whatsoever about the new rates for class D patients. The union just knew about it a few days before June 4, when the proposed increase was approved. But we still opposed it. We had a dialogue with the UP President Alfredo Pascual last June 27 and he was enlightened when we showed him our basis for opposing the increase in class D rates. Now the implementation has been suspended,” Santos told Bulatlat.com in an interview.

There was already a proposal to charge for basic service examinations last year but the All UP Workers Union, together with other groups, strongly opposed and protested against it “What is happening at the PGH is privatization, pure and simple. And it is not an isolated one. It is a clear example of how the government is abandoning its duty to provide health care to its people,” Caguiat said.

“We have the social responsibility to fight against this because this is unjust. It is the government’s responsibility to take care of the people’s health. Class D patients are the poorest patients, why squeeze them dry?” Santos said.

Mendoza also cited the Faculty Medical Art Building (FMAB) in PGH where doctors have private clinics and charge patients for consultation fees (P300 or $6.9 to P500 or $11).

The Community Health Education, Services and Training in the Cordillera Region (Chestcore), on the other hand, also expressed alarm over the proposed corporatization of the Baguio General Hospital and Medical Center. “With the corporatization of BGHMC, the adverse effects of privatization will be very much felt in the Cordillera Region, especially by the majority who are poor indigenous peasants.”

The BGHMC is a major hospital in the region and has been providing health services to around 2,500 mostly poor patients per month, not including the greater number of emergency and out patients.

Chestcore cited the privatization of Benguet General Hospital (BeGH) in 2004 that resulted in charges for wards and higher fees for basic laboratory procedures. Since then, many patients have been trooping to BGHMC to avail of services because of more affordable rates than the BeGH.

“BGHMC struggled to play this big role even as some aspects of privatization – more private rooms, contracted out dialysis and CT scan, sale of medicines and collection of professional fees, etc. – have already been implemented and have reduced accessibility to services. If the BGHMC will be corporatized and move toward full privatization, where will our poor patients go?”

Citing hospitals that are government owned and controlled corporations (GOCC) like the Philippine Heart Center (PHC), Lung Center of the Philippines (LCP), National Kidney Transplant Institute (NKTI) and Philippine Children’s Medical Center (PCMC), Chestcore said, privatization will further weaken the public health care system, which has been perennially lacking in facilities and personnel, because it will be run like businesses. “The primary objective of GOCC hospitals like the PHC, the LCP, the NKTI and the PCMC is profit over service.”

The costs of health services in corporatized hospitals belie the government’s claim that privatization will lead to more “accessible and affordable health care” for the poor.

Meanwhile, Navarro still hopes that the government would continue subsidizing people’s health care needs. “We may be able to find ways to find money for my daughter’s operation but many patients in the out-patient department are more underprivileged than us. They need the government’s help,” he said.