“Not only is the Aquino government refusing to approve a significant wage hike, it is also implementing new policies that further press down workers’ wages.” – KMU

MANILA — Hundreds of workers led by labor center Kilusang Mayo Uno (KMU) marched to the Labor Department’s main office in Manila this Monday morning and to Mendiola Bridge near Malacañang in the afternoon to press the government to scrap its new wage system, saying it amounts to a wage cut and is anti-worker.

Carrying streamers that read “No to wage cut! Yes to wage hike!” the workers urged the government to stop implementing the Two-Tier Wage System. They demanded instead the enactment of House Bill 375 or the P125 across-the-board Wage Hike Bill, which has now languished for more than a decade in Congress.

Most participants in the rally came from the Southern Tagalog region, where the two-tier wage system is being piloted since last April. In the region which hosts over half of export-oriented, foreign-controlled or subcontracted firms, a floor wage of P255 ($6.10), lower than the P337 ($8.07) minimum wage in the area, was imposed early this year. Foreign locators have reportedly welcomed the two-tier wage system. But most workers had been appalled.

“Not only is the Aquino government refusing to approve a significant wage hike, it is also implementing new policies that further press down workers’ wages. It has refused to act on the P125 Wage Hike Bill and railroaded instead the implementation of the anti-worker two-tiered wage system,” said Elmer “Bong” Labog, chairman of KMU. 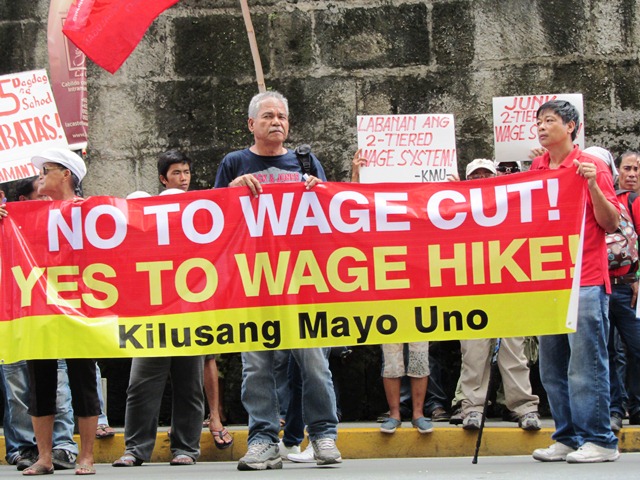 Labog explained that under the new two-tier wage system, the workers’ wages that have long been in dire need of catching up with the increasing cost of living would instead be pushed back down lower than before. He said that in Metro Manila where minimum wage is nominally the highest in the country, it is still less than half the amount an average family needs in a day to live decently. “Adding the recently granted P30 cost-of-living allowance and P125 won’t even bring it close to the government-determined cost of living,” Labog said.

The labor department has asked all regional wage boards to come up with their two-tier wage rates. So far, only Metro Manila and Southern Tagalog regions have explicitly defined two-tier wage rates. And in these regions, early experiences with the new wage system have already been alarming to workers.

“It was only in Metro Manila where the floor wage is the same as the minimum wage,” Labor Secretary Rosalinda Baldoz told Bulatlat.com a month ago, on the sidelines of presenting new data on increased Filipino child labor. In Southern Tagalog, and as implied as likely, too, for other regions, the floor wage is much lower than the minimum wages. But the wage order prescribing said wage rates in Metro Manila is currently still under protest by the Employers’ Confederation of the Philippines which wants it rescinded. The said wage order for Metro Manila with the new floor wage rate (equal to today’s minimum wage in the region) is due for implementation nearly two months from now.

From then on, the workers in Metro Manila, like in Southern Tagalog, would have to depend on their company’s productivity reports and willingness to grant them a productivity-based pay hike, before they can hope for a wage hike. 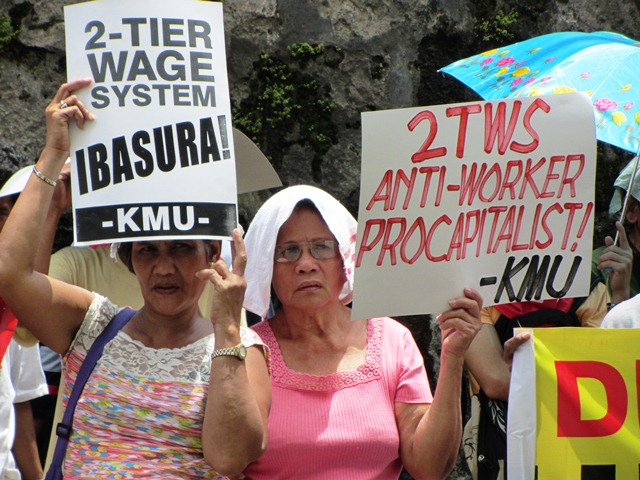 “While the minimum wage is in theory premised on workers’ subsistence, the floor wage under the two-tiered wage system simply aims to remove workers from classification as ‘poor’ according to the government’s lowered definition. The promise that workers in companies with high productivity will receive higher wages is just propaganda,” Labog said. He based it on the literally bloody treatment of the workers whenever they asked for a pay hike either through rallies or through various stages of conducting a strike.

The floor wage in the Southern Tagalog region was based on the Aquino government’s revised poverty threshold computation, which lowered the amount needed daily by a person to avoid being classified as poor and which removed more than 5 million people from the category of ‘poor.’ This is not acceptable to workers, who claim their wages should not be measured in terms of the most abject computation of poverty levels. 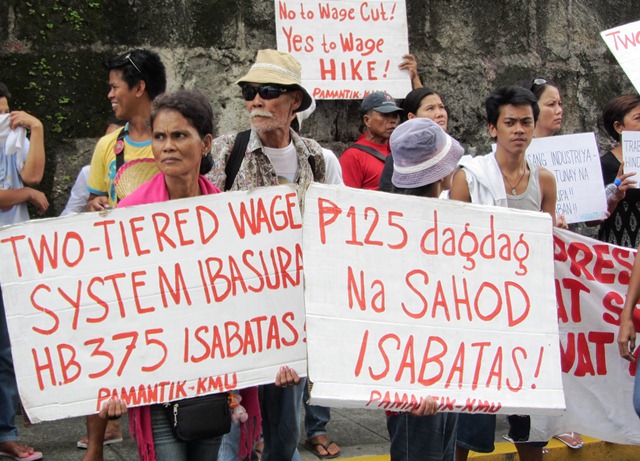 “We will be intensifying our protests against the two-tiered wage system and the demand for the P125 Wage Hike Bill in the coming weeks and months. We cannot sit back and watch the 15th Congress end without approving this long-delayed but much-needed measure,” Labog vowed.

“We are calling on the Filipino workers and people nationwide to join our protests. This government has done a lot to further press down our wages and worsen the hunger and poverty that we suffer,” Labog said. He called on all the country’s unions to help each other and strengthen the workers’ ranks, to help others to form organizations whether it be called or registered as a union, to better show the labor department and President Aquino that their experiment with the two-tier wage system “will only unleash an even more widespread hunger of millions more of Filipino families.”

“We are the creators of the wealth that the big capitalists are enjoying,” Labog said. “Yet,” he added,“the real value of our wages has been eroded through the years – we have every reason to fight to recoup that lost value.”