Massive mine spill foreseen yet ignored by Philex, DENR?

MANILA – Information from locals and the report of an independent fact-finding mission conducted by various groups last month show how both Philex and the government have had opportunities, and the means, to prevent a disastrous mine spill. Yet they failed. This failure of Philex’s tailings pond, critics said, “brings about a new shocking perspective on how ‘responsible mining’ is being managed in the Philippines, both by the government and the private sector.”

In Philex’s SEC (Securities and Exchange Commission) Form 17-a, it boasts of its ISO 14001 certificate since 2002 for its Environmental Management System and its winning streak in environmental contests.

Philex and documents from the Department of Environment and Natural Resources (DENR) show that they know the facts and history of Philex’s lone operational tailings pond 3. The DENR predicted its lifespan at 18 to 20 years, meaning it should no longer be used for dumping of mine waste by 2010. Philex’s Geology and Mine Engineering department itself forecasted in 1996 the maximum life expectancy of the dam, at 610 meters above mean sea level. They extended its lifespan to 2012 by raising the dam to 615 meters above mean sea level, despite issues of claims at the time and reported complaints that Philex refused to pay some claims.

As a government “model” for responsible mining, and multi-awarded for such claim, Philex conducts activities that could have given it ample warnings about the mine spill, sources told Bulatlat.com.

Every year, Philex conducts an internal audit of Tailings Pond 3. There is supposed to be “a multipartite monitoring team (MMT)” in place, too. Philex also yearly renews its Special Land Use Permit with the government, who, in turn, is expected to check first the situation of the tailings pond before renewing the said permit. Even among the mineworkers, it is also reportedly well-known that the pond’s lifespan is only up to 2010, maximum of 2012.

Yet, despite all these and the experts at their disposal, a major mine spill still occurred.

Based on the results of an independent fact-finding probe, tales emerge showing how Philex seems to act like an untouchable, powerful force in Itogon, Benguet.

Attempts by this independent fact-finding mission (FFM) and the media to probe into Philex’s latest mine spill were reportedly blocked at the Philex’s checkpoint, suggesting that “despite laws on domination limitations concerning mining tenements and prohibitions of checkpoint on national roads, Philex seems to have total control over the laws,” as a local told Bulatlat.com.

The independent third-party fact-finding mission still managed to get a report of what happened, its initial effects on the water system and the communities, from interviews with local government leaders, local personnel of the DENR, San Roque dam, and some residents including indigenous peoples.

The FFM failed to enter the mining-affected Talnag community and the Philex compound itself. The national access road (going to Talnag) passes through the Philex compound. “All persons in all vehicles, needed to get off and no cameras were allowed beyond the gate,” the group wrote in their report. “Even when official NASSA and CCCP letters were shown, security guards stated that they were not given instruction by the Philex office to let them in.”

During this fact-finding mission (FFM), the spillage has been going on and off for more than six weeks already. Environment Secretary Ramon Paje reportedly told them at the time: “the DENR is now looking into any violations of the mining and environmental laws and regulations that may have been committed by Philex.”

However, concerned groups have been wondering why the DENR investigation is taking too long to complete. Various peoples organizations including those of indigenous peoples who live within or near the Philex’s mine site have repeatedly called on the government to conduct an impartial investigation, and make this transparent.

The fact-finding team reported that “There is the issue of transparency: even the barangay chairman and TV5 (owned by the owner of Philex) are not allowed to enter the compound. Initially, the barangay chairman was also not given reports, they were told. Only after he reasoned that many people are asking him questions about the spill and he wanted to answer them was he provided with the report of the Mines and Geosciences Bureau (MGB).

“Due to the magnitude of the problem, the technical assessment and monitoring team is headed by the DENR – Central Office,” the FFM learned. The DENR in the Cordillera region is just assisting in the DENR investigation. “The DENR Central Office will provide the public with comprehensive reports on the spill. There is no other mechanism to inform the public on the updates,” the FFM wrote.

The FFM itself failed to acquire the DENR report on the spill, even though the village officials of Ampucao in Itogon, Benguet said they already got one. The FFM reported, too, that even the Itogon Mayor Oscar Camantiles, a member of MMT (Multi-partite Monitoring Team) and MRFC (Mine Rehabilitation Fund Committee) and chairman of the Municipal Disaster Risk Reduction and Management Council, did not receive any reports (on the minespill) from Philex.

“He (Camantiles) is working with the communities to investigate, but they could only pass through the San Roque dam facility because the security is very tight and they are not allowed entry through the Philex main gate,” the FFM reported.

After unloading contents of its tailings dam, business-as-usual for Philex?

As it had reached its lifespan since 2010, Philex’s tailings pond 3 had been full before Aug 1. In fact, it had reportedly leaked some tailings back in 2004 and 2009.

After days of continuous mine spill since August, interrupted only by what the mineworkers described as “trial and error” attempts at plugging the leak, “the dam is almost empty” as of Aug 15th, when the village leaders the FFM talked to had surveyed the dam.

This could mean that Philex’s TP3 may soon be ready for renewed dumping of mine wastes, pending Philex’s announced “repair and remediation.” Sources told Bulatlat.com that “the cause of the dam’s failure is a cross between gross negligence on the part of the company, or maybe, it is intentional – to drain the dam’s content and thus make it available for re-utilization.” Both entail less cost for Philex, at the expense of the surrounding communities.

While Philex has not yet been told to explain its alleged negligence that brought about a massive mine spill, the government through the MGB has in fact continued to refer to Philex as model in responsible mining – Philex appears set to haggle for a lower fine. Also, while the affected communities struggle to live with the effects and threats of the mine spill, Philex is already talking of resuming mining operations on or before the year ends.

Philex’s actions have shattered “the myth of safe and responsible mining,” the Cordillera People’s Alliance (CPA) for the defense of ancestral domain and for self-determination said in a statement. 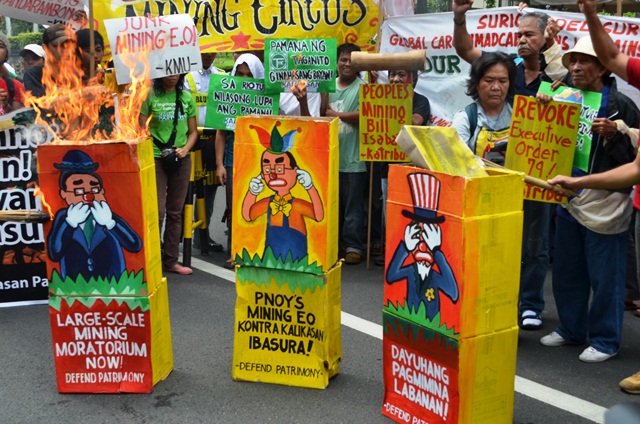 Yet, “these kinds of mining companies are being supported by the Aquino administration,” Clemente Bautista, convener of Defend Patrimony Alliance, said when they stormed the venue of Mining Philippines 2012 Conference of the Chamber of Mines of the Philippines (CoMP) in Pasay City on Sept 19.

“The Mining Executive Order of Pres. Aquino allows these companies to further deplete our resources and still get away with their violations,” said Bautista.
Last month’s mining conference was reported as convened by the mining sector and the government to fine-tune the Aquino government’s new mining policy and implementing rules. It was regarded as one big lobbying effort by the mining industry. Philex attended the conference.

But for peoples’ organizations, that conference is just further “proof it is business as usual to large mining companies. They will just continue their plunder,” said Kakay Tolentino, spokeswoman of Katribu Partylist. The EO 79, explained Tolentino, “does not address the loopholes of the Mining Law that has allowed mining corporations to disregard the protection of our environment and respect for indigenous peoples’ rights. It has affirmed the continuation of environmental destruction done by large mining companies.”