Philex has reportedly been filling its tailings ponds to way over its capacity, doing only “mitigating measures” against likely spills, and ignoring the pond’s ending lifespan.

MANILA – Residents of Benguet province and all communities downriver of Agno and San Roque dam continue to live in danger from the accumulated toxic wastes of Philex Mining Corporation. Although Philex has shut down since Aug. 1 its sole gold mining operations – and it tells the public the mines would remain closed until the company has attended to the reported cracks and resulting leakages from its mine tailings pond – communities living near the site said they hope Philex would just shut down its mining operations permanently.

Philex estimated the minimum time for stabilizing the dam at three months. But whatever repairs it has been doing there are only “temporary and stop-gap,” said Santos Mero, deputy secretary-general of the Cordillera Peoples Alliance (CPA).

Philex’s mining operations in Benguet “should be completely stopped now,” said Mero of CPA. He cited the dangers continually being posed by Philex’s now unstable mine tailings dam, which, he said, cannot be repaired anymore. He challenged the MGB (Mines and Geoscience Bureau) to come up with a decision sooner than later ordering Philex to stop further impoundment of mine wastes in the already unstable dam, and to stop its mining operations for good.

Mero also urged the Aquino government to order Philex to compensate those affected or damaged by its recent and past mine waste spills.

Philex’s sole active tailings pond is already up for decommissioning this year, but Philex seems bent on using it beyond its expected life span, and beyond even its own projection of when the dam would have reached its limit. After the company noted an increase in proven reserves in the Padcal mine site, it has pegged its mine life up to 2014, two to four years longer than the lifespan of its tailings dam. 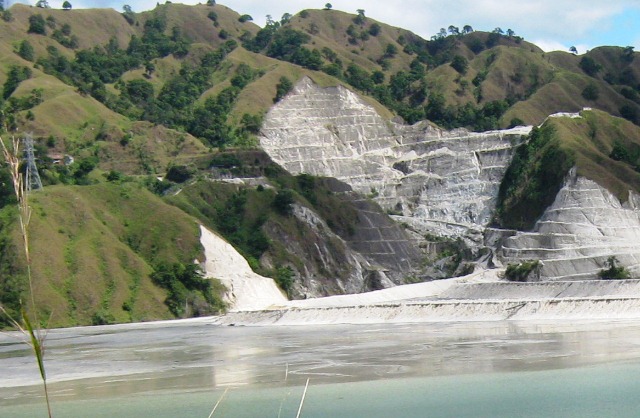 Sources told Bulatlat.com this much is evident in the company’s presentation on TP3 (tailings pond 3) updates as of August 2008, “wherein said level limit was projected to be reached by early to mid 2012.” Data from the Department of Environment and Natural Resources–Cordillera Autonomous Region (DENR-CAR) in April 2006 also revealed that TP3’s life expectancy is 18-20 years. Thus, from its commissioning in 1992, the 18-20 years lifespan would have been reached by 2010 to 2012.

Philex’s projection already took into account its plan of raising the dam crest from permitted elevation of 600 meters to to 623 above mean sea level.

As such, with or without the reported cracks and spillage last Aug 1, Philex should have already been shutting down its operations on account of the full capacity of the tailings dam. “Where else will it unload its mine wastes?” Mero asked.

But “No contingency plans were executed by Philex despite its continuous operations beyond 2012,” Santos Mero told Bulatlat.com. He noted that despite the projections for the said tailings pond being full by this time, Philex has also made little to no substantial efforts to address this.

Philex Mining Corporation has mined the area in Padcal, Tuba, Benguet for 53 years now. Since it started operations up to 2010 at least, it reported in its website that it has extracted and processed an aggregate of 350-million tonnes producing 929-million kilograms of copper, 170-million grams of gold and 186-million grams of silver.

But during those years of mining, Philex had also filled up to capacity until it stopped using its first tailings pond in 1981, and its second in 1992. The latter’s dam walls, in fact, collapsed first in January 1992 due to “foundation failure” before the company stopped using it that year – slightly over the 11 years estimated lifespan of the said dam. Its wall’s collapse reportedly unleashed 80 million metric tons of tailings to the environment.

This year, communities near the mine site fear more danger of mine spills, this time from the much bigger tailings pond 3, as Philex appears bent to continue mining despite the pond’s ending lifespan.

In Philex’s company reports, it made mention of mostly “mitigating measures” it has undertaken to prevent spills. These include annually replacing worn-out pipes of the mill tailings conveyance lines, and concreting of service roads within the dam embankment. It also started constructing an emergency open spillway and repairing the flooring of the diversion tunnel (both to be completed by next year).

But the dam’s age is catching up with it despite Philex’s “mitigating measures.”

Although the company has shut down operations temporarily since August 1 because of a reported leak, which, it said on August 9, it had successfully plugged, it also estimated that roughly 12 operational months volume (around 9.9-million tons) of sediments were already released covering 2.5 Km long, 15 feet wide and 2-8 feet thick of Itogon’s Balog River.

Kalikasan Partylist, in a statement, questioned this “early” denial of the dangers from toxic spill, given that reports from affected communities note that the spill continues. Besides, it said that the supposed investigation both by the company and the MGB are still underway.

A new leak has reportedly been discovered, too. The Cordillera Peoples’ Alliance said sources from the affected communities have reported to them that parts of the company’s tunnel intended for water flowing to the river system have cracks and leakages.

Prior to the reported spills, Philex had looked forward to increasing its gold output and profits this year.

But for the residents, the gains from the mining operations hardly outweigh the risks it pose to them. Even the promised jobs are in danger. Sources told Bulatlat.com that with the shutdown, the company immediately implemented cost cutting measures chiefly affecting the workers. Philex ordered a straight day shift for almost all of its workers instead of the 3-shifts per day scheme as soon as it suspended operations Aug 1.

On August 8, it suspended all probationary, contractual and casual employees “for the time being.” Rumors of mass lay-off and salary/benefits being held back also reportedly quickly spread among the employees.

Mero cited also the huge waste of what used to be thickly vegetated lands that were transformed into non-productive wasteland, after it were fenced off as mine tailings dam.

Today, the first two tailings pond used and later decommissioned by Philex continue to be “unproductive and a wasteland,” despite decades of disuse (as tailings pond). Experts who inspected the early stages of the construction of tailings pond 3 also noted in a report, after inspecting Philex’s two closed mine wastes ponds, that “tailings pond would be unproductive for the next 40 years.”

Worse, according to Mero, the toxic wastes still gathered in those ponds continue to pose risks of eventual spillage to people in the vicinity and all downriver tributaries.