“With the celebration of Mine Safety Week, the mining industry is portraying itself as a socially responsible industry, but in truth it is nothing but a self-serving, destructive and exploitative industry.” – Kakay Tolentino, a Dumagat spokeswoman of Katribu Partylist

MANILA – “There is life in mining,” said the oft-repeated ad of a mining company. But life for whom?

On the first day of the “celebration” of Mine Safety Week, representatives of Filipino farmers and indigenous peoples, scientists and environmentalists, expressly distanced themselves from the government celebrations and instead held protest rallies across the Philippines against what they described as liberalized, plunderous mining, which also often comes with brutal militarization.

In Manila, the protesters marched to the Mendiola Bridge (now Chino Roces) and held a brief program there. They condemned “the continuing environmentally destructive impact to communities and key ecosystems attributed to foreign mining companies.” They unfurled an image of what they said as real “righteous path,” a paved road to national industrialization and an end to destructive, extractive and largely foreign-controlled mining.

The activists reminded Aquino that the 29th anniversary of the first recorded mining disaster in the Philippines coincided with the opening of Mine Safety Week.

Long before the much-criticized Mining Act of 1995, on November 8, 1982, the walls of the tailings pond of the Maricalum Mining in Negros crumbled and collapsed, unleashing a torrent of million tons of mine wastes on the river system and agricultural fields of Negros, recalled Clemente Bautista, national coordinator of Kalikasan, an environmentalist group. 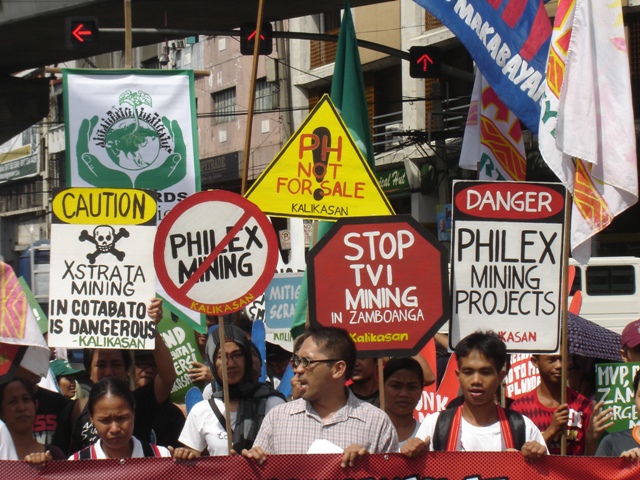 The incident, said Bautista, “poisoned the rivers, submerged the farmers’ crops and inundated with toxic wastes thousands of hectares of farmlands in Negros. It drove away thousands of hungry families from the towns of Sipalay and Cauyan in Negros.”

“With the celebration of the Mine Safety Week, the mining industry is portraying itself as a socially responsible industry, but the truth is, it is nothing but a self-serving, destructive and exploitative industry,” said Kakay Tolentino, a Dumagat and spokeswoman of the Katribu Partylist.

“President Benigno Aquino III, the Department of Environment and Natural Resources (DENR) and the Chamber of Mines wish to portray the current state of mining in the Philippines as responsible and nurturing both for the environment and the citizens, but it is just a cover-up,” said Natalie Pulvinar of Advocates for Science and Technology for the People (AGHAM).

In celebrating Mine Safety Week, “Aquino just wants to make a show as if the Mining Act of 1995 is still good and functioning despite protests and the very ugly effects of large-scale mining,” Pulvinar added.

In fact, mining companies operating in the Philippines are being forced to “spend huge amounts of money now to convince the people about the fictitious goodness of mining, precisely because the people’s consciousness and protests against the destructive large-scale mining have intensified over the years,” noted Renato Reyes, secretary-general of Bayan (New Patriotic Alliance), at the environmentalists’ rally in Mendiola.

Not only the farmers, fisherfolks and indigenous peoples are now opposing mining, but also some members of the Church and local government executives, said Reyes. He said that even before the communist rebels torched the equipment and plant of the biggest mining companies in Surigao last month, there had been numerous spontaneous protests from the affected people in the immediate communities.

Aquino is reportedly being bombarded by the intense lobbying of the influential Chamber of Mines as some local government units pass ordinances banning destructive mining practices such as open-pit mining. The provincial governments of South Cotabato and Zamboanga del Norte, for example, have banned open-pit mining. In reaction, foreign mining companies vowed to exhaust “all legal means” to nullify the ban. The TVI Resource Development (Phils.) Inc. has sought a temporary restraining order or preliminary injunction from the court against the implementation of the ban in Zamboanga del Norte. 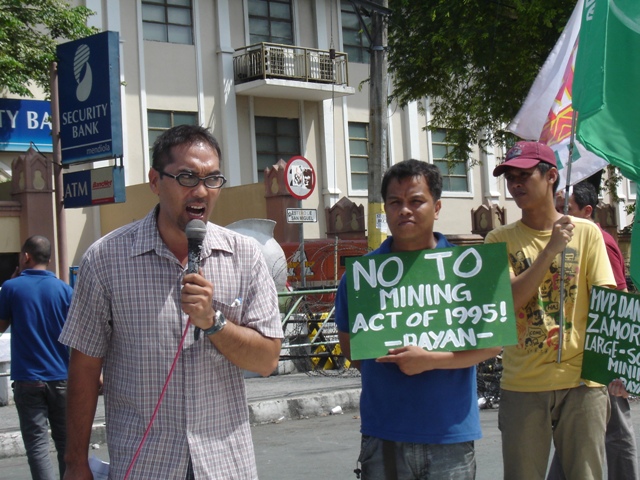 In public debates in the said provinces, church-people and community organizations are reportedly challenging the rosy claims of “experts” hired by mining companies. The communities are fearful of experiences from similar mining operations, which poisoned rivers and farms due to the mining companies’ mine wastes. Mines also caused land subsidence or soil going downward or caving in.

Ugly effects of mining, hollow cause for celebration

Environmentalists reported that millions of Filipinos have lost their land and livelihood due to the mining operations particularly of huge mining companies. “Mining has destroyed our forests and mountains to the detriment of the people whose livelihood depended on it,” said Pulvinar in a speech at Mendiola on the first day of Mine Safety Week.

Pulvinar ticked off some of the biggest mining-related disasters that happened in the Philippines after the Mining Act of 1995 was signed. She especially cited the case in Marinduque, where the poisoning of the Boac River led to illnesses and loss of livelihood of thousands of people in the area.

“In just two decades, mining has created ‘extended’ lands due to mine tailings full of heavy metals and poisons, which not only kill fish and destroy crop lands but also cause anaemia, leukemia and other illnesses,” Pulvinar said.

“No matter how splendid the celebrations of both Malacañang and the Chamber of Mines are, it can never fully hide the fact that hundreds of thousands of hectares of forest lands have been destroyed by the mining operations of large mining companies operating in Palawan, Surigao, Samar, Marinduque, Masbate and Negros,” said Bautista of Kalikasan.

Most anti-mining activists also decried how millions of hectares of Philippine lands are now being owned by foreign and private mining companies.

“Wherever you go in the Philippines, there are foreigners who have insolently seized ownership of our lands and are now plundering its natural wealth such as minerals,” said Bautista. He cited as example the MRL Gold in Batangas, Xstrata in Cotabato and TVI in Zamboanga.

The Canadian-owned Mindoro Resources Limited Gold in Lobo, Batangas is already reportedly spooking the residents with the acid mine drainage that usually comes after open-pit mining operations. 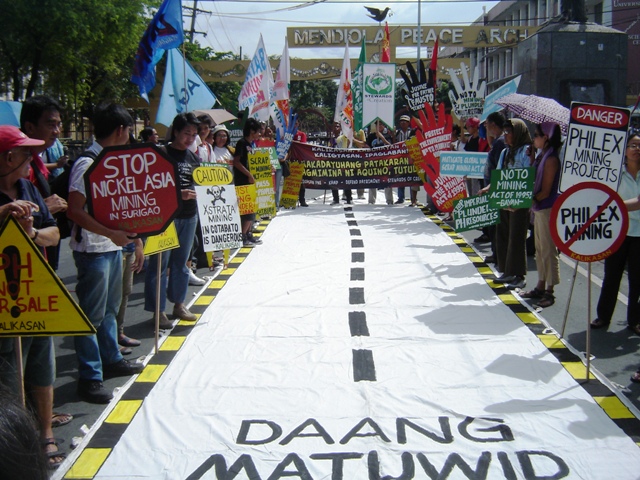 Concerned citizens who established the Defend Patrimony Alliance, a multi-sectoral network, noted that Aquino also recently inked a $14-billion worth of mining investments with Chinese companies this September. Part of this covers the bio-diversity rich province of Palawan, home to the underground river system that the Philippine government itself is campaigning for inclusion in the list of new seven wonders of the world.

“Aside from peddling Palawan to Chinese companies, let us remember that the National Commission on Indigenous Peoples (NCIP) has also awarded a certificate of precondition to MacroAsia, endorsing the social acceptability of its mining operations in Palawan despite opposition of the indigenous peoples in the area,” said Defend Patrimony! in a statement.

Lucio Tan-led MacroAsia is set to mine nickel in Palawan despite the resistance of indigenous peoples and civil society groups in the province. Palawan is part of the Man and Biosphere Reserve program of UNESCO; it hosts 49 animal and 56 botanical species found in the International Union for Conservation of Nature (IUCN) Red List of Threatened Species. Unfortunately, according to the Aldaw Network, an ancestral land domain watch group, all these would be threatened once road constructions and mining and logging begin in full swing at the province.

In Manila, environmental activists cited plenty of examples explaining why the old and newly approved mining operations are being strongly opposed by the affected communities and growing number of supporters.

“It has been proven historically that the mining industry, on the pretext of commercialized and liberalized economy and driven by greed and profit will never be safe to the workers and to the host community,” said Kakay Tolentino of Katribu. She cited the experience of the indigenous peoples of Cordillera and Surigao who “tell us that after bleeding out the communities’ mineral resources, the mining company will just leave, with the communities worse off.”

On top of examples cited by Pulvinar of Agham, Tolentino cited the cases of Lepanto and Philex in Benguet, Lafayette in Rapu-Rapu, Albay and Mt Diwata in Compostela Valley as proofs of “irresponsible mining.”

Previous reports have exposed how the collapsed dams for mine waste of Lepanto Mining Company in 1992 and 1995, and of Philex Mining in 2000, released millions of toxic silt in the Abra River. Lafayette Mining has spilled cyanide in the waters of Rapu-rapu.

Instead of addressing all these massive resource grab and environmental disasters that dislocate and victimize Filipino farmers, fisherfolk and indigenous peoples, Aquino has only fast–tracked the approval of pending mining projects as soon as he became president, Bautista lamented.

Based on DENR data, 530 mining applications or projects were either approved or endorsed by the Aquino administration. Worse, according to environmentalists, the Aquino government has given the go-signal to intensified militarization in mining areas to protect the operations of mining companies.