Information being provided by Philex mines and the government on why the mine tailings pond spill happened and the devastation resulting from it are understated, nay sanitized, an independent mission discovered. It is “the worst mining disaster in the past two decades.”

MANILA – Despite the 20.6 million metric tons of mine spill reported so far, the destructiveness and the lingering threats of another mine spill have yet to make headlines in the Philippines. The Department of Environment and Natural Resources (DENR) has not released yet a more detailed report on its extent and impact. But from the sharing with Bulatlat.com by some locals, and from the report of the independent Fact-Finding Mission last Sept 16-17, a big swathe of Northern and Central Luzon seem threatened by further disasters in the near future, no thanks to the mine spill.

In a protest action at the Philex’s main office in Ortigas last week, Kalikasan-People’s Network for the Environment (Kalikasan PNE) and various groups demanded accountability from the mining company over what they call as “the worst mining disaster in the past two decades.”

Aside from families immediately affected by the surge of mine tailings previously held in Philex’s tailings dam at Itogon, Benguet, the downriver communities would also have to deal with toxic substances in their waters, fish-kill, loss of livelihood and increased potential for flooding.

How Philex’s latest mine spill happened

Based on the FFM report and locals’ sharing with Bulatlat.com, here is how the leak happened:

Philex’s TP3 has two penstocks (A & B), two hollow elongated structures located at the south end of its main dike. These penstocks have diversion tunnels heading downward east toward the Balog River. The penstocks have sidewalls or stop-boards, but open at the top where overflow water of the tailings pond enters and drains to the drainage tunnel below it. These form a channel for controlling the volume of the water flow, releasing water gradually when the water level in the penstocks reaches some 623 meters high, theoretically leaving the silt behind in the dam. 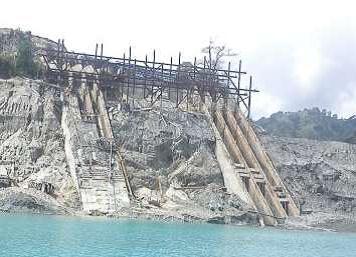 On the early hours of August 1 during the rage of typhoons Ferdie and Gener, a report of a leak from TP3 coming out from one of the penstocks diversion tunnel portal prompted the company to initiate shut down, locals told Bulatlat.com.

The initial investigation of the Mines and Geosciences Bureau (MGB) of the DENR showed that portions of the stop-boards might have been displaced by hydrostatic pressure brought about by the unusually heavy rains in the area for the last two weeks, according to Director Leo Jasareno. This coincided with the “force majeure” excuse cited by Philex.

Fixing the displaced stop-boards could have remedied the problem, if this was the real reason for the leaks. But sources said the search for the leaks and the plugging operations have been “trial and error,” “on and off,” as one leak after another occurred.

Worse, the leak comes from the dam crest, or bottom/ground of the dam itself.

Eddie Amuasen and Lope J. Milo, Jr., chairman of Ampucao, one of the biggest villages of Itogon, Benguet, and chairman of village environment committee, respectively, told the FFM that “due to overcapacity, the foundation gave way at the base of the dam under great pressure.”

The great pressure came not just from the storm and the rainwater but also from the years of accumulated tailings in the dam. It has reached its maximum lifespan, after all.

As the leak or hole is at the dam’s ground, “Instead of surface release (with the penstocks), the tailings – both water and silt – spilled in huge volumes through the ground spill,” Ampucao village leaders told members of the FFM. The water pressure was “very strong, with the strong rush of murky water came explosions, big trees uprooted and the murky water as high as a mountain.”

After the MGB issued a cease operations order to Philex on Aug 2 until TP3’s integrity is assured, the mining company took in foreign consultants to solve the problem. On August 9, Philex announced the successful plugging of the leak using big boulders of rock.

On August 11, 2012, another leak occurred. Two functional load-haul-dump equipment (LHD), one functional bulldozer, and several large industrial container boxes were reportedly blown out of the tunnel and into the river.

Sources told Bulatlat.com that attempts to stanch the leak were “more of a trial and error than a well-engineered undertaking.” But these efforts were put to waste – “the leak was on and off.” As a last resort, they said, some “gigantic concrete spheres nine meters in diameter were thrown down at the crater in an attempt to seal the seepage.”

Due to the magnitude of the sinkhole, these ‘gigantic spheres’ being rolled out from its crater appear like mere marble toys. (See short video in: Philex’s 20 MT mine waste spill, ‘An act of God, or Greed?’)

By end-September, Philex’s head, Manuel V. Pangilinan, told the media that the company hopes these spheres and gabions could plug and filter the mine tailings, so they could resume operations on or before yearend.

At the time, all talk from government about the mine spill revolves on multi-million peso fines and penalties, which Philex said they would contest. Philex complained of “trial-by-publicity,” and said they have been responsible about the incident. But how much detail of the mine spill had been reported so far, if concerned groups including the affected communities are still asking up to now for independent investigations and impact assessment?

Sources said Philex’s top management, gripped by panic, are often “hot tempered, irrational and disorganized.” This was reportedly vented on workers in the field. Pressured by the management, workers are reportedly compelled to do strenuous jobs regardless of age, medical, and physical conditions. 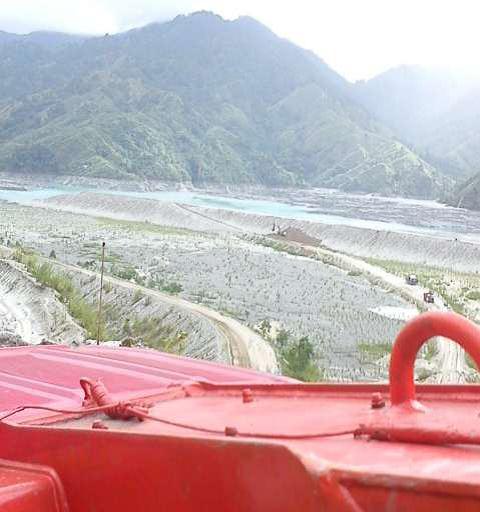 Locals further said that the river clean-up workers are in constant danger for there is no effective alarm system to warn them in case there is another tailings surge from the dam.

The hauling crews, they said, are often physically exhausted carrying supplies back and forth to and from both the cleanup and access crews, in an unpredictable climate.

For workers designated to plug the leak, the lethal combination of moving equipment, haste and stress creates an accident-prone environment. An employee reportedly lost four fingers in a slasher-cable accident. A truck driver along with his helper reportedly died in a vehicle accident during work hours.

Speaking on condition of anonymity, sources said specific circumstances of these accidents are not officially disclosed, but all of these happened at work.

Lack of transport was a common complaint especially in going home. Workers are squeezed standing in dump trucks being used as conveyance. After 45 minutes of craggy rough road, they reportedly reach their homes 2 to 3 hours after time out, beat and hungry. Some come home from a 24 or 48 work hours work due to lack of reliever. 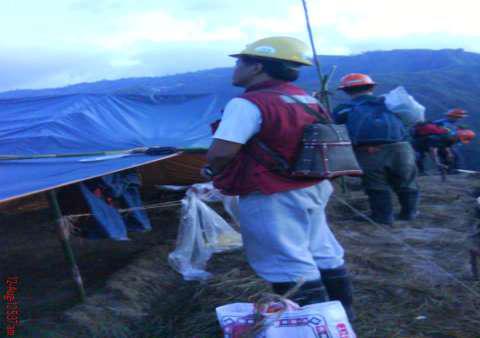 A number of employees also complained of unpaid overtime and night differentials. But it appears that the management is focused more on the immediate remediation of the tailings pond and the leak, so it could resume mining operations sooner than later.

Initial report of devastation to downstream environment and lives

The turbulence of rampaging million-tons of tailings has reportedly devastated the downstream communities near Philex’s minesite. The Balog River used to have clean water, as locals and Engineer Alex Luis, Chief of Pollution Control Division of the DENR-CAR Environment Management Bureau (EMB), affirmed. “In the past, Balog creek is categorized as a Class A river because it was clean. At present, it is very polluted due to the Philex mine tailings discharge,” Luis said.

The village captain of Ampucao, one of the largest villages of Itogon where Philex’s tailings pond 3 is located, told an independent fact-finding mission last month that “toxic wastes can be seen in the dried and poisoned plants, trees and branches where effluents flowed. Mining wastes include sand and minerals. Mutant tilapia (popular fish in Philippine market) found in the pond looked different, with big head and small body, which the workers eat.”

Livelihoods and community improvements along parts of the Balog River were reported as washed out, too.