MANILA – Eduardo Kapunan, one of the 13 accused in the more than 25-year old Olalia-Alay-ay double murder case, surrendered last October 6 to the Philippine Army, bringing to two the total number of accused currently in government custody. Trial of these accused had started to move forward only this year, but, so far, the government has failed to arrest most of the accused.

Since February this year, all the accused had been separately issued a warrant of arrest for the abduction, torture and murder of labor leader Rolando Olalia and union organizer Leonor Alay-ay in November 1986. But presiding Judge Maria Consejo Gengos-Ignalaga said during last month’s pre-trial of Perez that the original warrants of arrest she issued last February had all been returned; “the accused could no longer be located in their known addresses.”

On July 24, Desiderio Perez, one of the accused, surrendered to the elite police unit of Rizal amid “mysterious circumstances,” the progressive labor center Kilusang Mayo Uno disclosed in a statement. These circumstances involved a fake statement attributed to the KMU, where the labor group was supposedly praising the likelihood of justice for the Olalia-Alay-ay double murder. 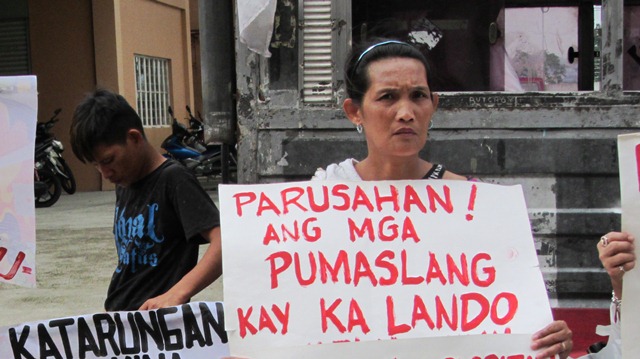 A member of NAFLU joins a picket before the Regional Trial Court during the trial. Rolando Olalia’s labor leader days started with the federation NAFLU. (Photo by Marya Salamat / bulatlat.com)

After Perez surrendered last July, he was arraigned last August where he pleaded “not guilty”; his first pre-trial began last September. This week began presentation of witnesses against him and the other accused, even as families of the victims pressed the government to jail all the accused.

Last month, PNP Superintendent Ceasar Tannagan, told Bulatlat.com that they are negotiating for the surrender of the other accused. Tannagan is a former member of the Philippine Army; he heads the elite police force in charge of the “security” of one of the accused in custody, retired soldier Desiderio Perez.

The surrender, Tannagan explained in Filipino, is because the accused now wanted the case “to move on,” considering that warrants of arrest had been issued against them. Previously, the accused had delayed the trial for years by filing motions questioning why they were being charged with the double murder case, when they were supposedly pardoned in an amnesty agreement with the Ramos government. This argument was rejected by the Supreme Court with finality in 2009.

All the accused are not just members of rightists soldiers group RAM, they were part of those who launched bloody coup d’ etat against the Corazon Cojuangco-Aquino administration in late 80’s. Eduardo Kapunan was a former leader of RAM.

Rolando Rico Olalia, lawyer and son of the murdered labor leader, said the counsels for the families of the victims asked the court why Kapunan is under the custody of the Philippine Army. Normally, accused persons like Kapunan should have been under police custody, he said.

“Why is he with the Philippine Army considering he’s already retired and supposedly the (double murder) case had no connection with the Armed Forces of the Philippines?” asked Rico Olalia.

Kapunan did not attend this week’s hearing as counsels for the survivors of Olalia and Alay-ay presented their witnesses. Instead, Kapunan’s lawyer, Lorna Kapunan, filed in his behalf a petition for bail.

Olalia surmised that the other accused will bank on the outcome of Kapunan’s petition for bail.

Even as the families of the victims welcomed the news that at least two of the accused are now in custody, they also expressed reservation over this apparent role of the Philippine Army. Investigations into the double murder case reportedly suggested that Kapunan had been the alleged mastermind.