The sudden “surrender” of one of the suspects after 26 years, and mysterious press release, raised the suspicions of labor center Kilusang Mayo Uno.

MANILA – At long last, after 26 years, the court case in the double murder of labor leader and lawyer Rolando Olalia and his driver-bodyguard Leonor Alay-ay appears to be nearing resolution. But ironically, justice still remains elusive if the supporters of the suspects who came from the military would have their way, said the progressive labor center Kilusang Mayo Uno (KMU).

Olalia was chairman of KMU and left political party Partido ng Bayan when he was brutally murdered in 1986, under the newly established administration of the late Corazon Cojuangco-Aquino, mother of current Philippine president, Benigno “Noynoy” Aquino III. 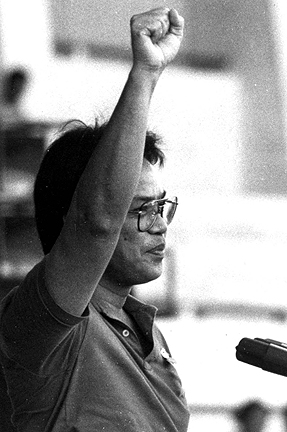 The KMU, in a statement, dared President Aquino to help solve the case, especially in the light of some “doubtful circumstances” in the recent developments in the murder case.

Enrile, Honasan, trying to save the Olalia suspects?

The circumstances surrounding the legal proceedings are spooking the KMU. The recent “surrender” of the suspect and a mysterious press conference being attributed to the KMU last January aroused the suspicion of the labor center. “We fear that these are being undertaken to clear the names of the accused,” Elmer “Bong” Labog, chairman of KMU, said in a statement.

Last January, the labor center was shocked to hear in the news that they had supposedly held a press conference where they allegedly called on President Aquino to solve the Olalia-Alay-ay double murder case. The KMU purportedly said “the wind of justice is finally blowing in the country.” Strangely, the KMU held no such press conference.

Though one of the murder suspects has surrendered, the KMU said, they “have every reason to doubt the motives of the legal proceedings especially now that Sen. Juan Ponce Enrile and Sen. Gringo Honasan, both known leaders of ultra-right group RAM, are very close to the Aquino government.”

“Clearing the names of their comrades in RAM may be the payback for their role in the Corona impeachment,” Labog surmised. Senators Juan Ponce Enrile and Gringo Honasan, known RAM leaders, are allies of the president and are instrumental in the impeachment of Chief Justice Renato Corona last May.

Confounding the doubt on the fate of the Olalia-Alay-ay double murder case are the legal successes this week of the likes of retired general Jovito Palparan and former president Gloria Macapagal-Arroyo.
“The Aquino government’s failure to arrest and jail former Army general Jovito Palparan and its failure to convict and jail Gloria Macapagal-Arroyo show its attitude toward human-rights violators,” Labog added.

Olalia and Alay-ay were kidnapped, tortured and then killed in November 1986, when KMU was still allied with the first Aquino government. “It has been 26 years and justice continues to be denied our comrades, whose murders were part of the ultra-rightists’ destabilization campaign against the Cory Aquino government,” Labog said.

Rather than having what the KMU calls as a “legal charade” to close a 26-year old celebrated murder case, it urged the Aquino government instead to provide justice for respected labor leader Olalia and his aide.