MANILA – Mylene Zantoa, 32, only wants a decent life for her family.

Zantoa and her husband work on less than two hectares of land in San Francisco, Quezon province. Mainly preoccupied with copra production, Zantoa said what they earn is not enough to feed and to send to school their five children.

These days, the selling price of copra is a mere P14 per kilo. A 15-percent commission, referred to as resecada by coconut farmers, is taken by middlemen. For one whole year, Zantoa said they only earn P10,000, minus the expenses. “Life is difficult for us, coconut farmers,” she said.

Zantoa joined hundreds of coconut farmers in several protest actions in Manila this week to call on the Aquino administration to give back to them the coco levy funds.

Zantoa’s grandfather was among the 4.5 million coconut farmers who, for ten years since 1971, paid a levy of P0.55 for every 100 kilogram of copra they sold to millers and exporters. This became known as the Coconut Investment Fund (CIF). 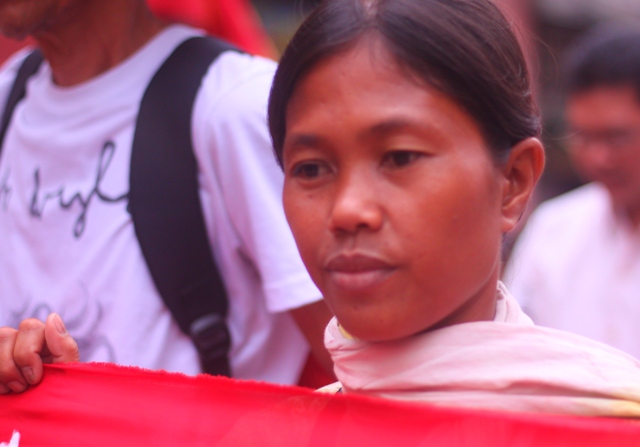 Mylene Zantoa, spokeswoman of Piglas-Quezon, an organization of coconut farmers in Quezon, joins the protest in Manila.(Photo by Ronalyn V. Olea/ bulatlat.com)

In 1973, the Coconut Consumers Stabilization Fund (CCSF) was created. For nine years since, the farmers were taxed an additional P15 for every 100 kilos of copra they initially produced. In the following years, this was increased to P100 per 100 kilos of copra, according to a primer prepared by the Kilusang Magbubukid ng Pilipinas (KMP or Peasant Movement in the Philippines).

The levy collected was valued at P9.7 billion, and is estimated by the Philippine Coconut Authority (PCA) to be worth P100 billion ($2.314 billion) as of 1999. Over the decades though, small coconut farmers like Zantoa have been deprived of any benefit from the coconut levy funds.

The KMP has been consistent in saying that the coconut levy was used by Eduardo “Danding” Cojuangco, a known crony of former dictator Ferdinand Marcos and the president’s uncle, to buy in and gain control of San Miguel Corporation (SMC) and United Coconut Planters Bank (UCPB).

In its January 24 ruling, the Supreme Court declared that the SMC assets in the name of 14 holding companies set up under the Coconut Industry Investment Fund (CIIF) and the Oil Mills Group (OMG) were purchased using the coconut levy and are therefore “owned by the government to be used for the benefit of all coconut farmers and for the development of the coconut industry.”

The high court affirmed the May 2004 Sandiganbayan ruling awarding 27 percent of the 47 percent block of SMC shares to the government, which was diluted to about 24 percent with the investment of Japanese brewer Kirin in SMC. This 24 percent block of SMC shares or more than 753 million shares is valued between P50 to P100 billion ($ 1.162 billion to $ 2.325 billion).

The Aquino administration set up the Presidential Task Force on the Coco Levy Funds headed by the National Anti-Poverty Commission (NAPC).

Last April, former Akbayan chief and NAPC secretary Joel Rocamora said the NAPC had drawn up a P10-billion, five-year “road map” to revitalize the coconut industry and that the first year of the program could be funded with loans. “The plan is to borrow off the coco levy,” Rocamora was quoted as saying..

On October 18, Zantoa and hundreds of coconut farmers from Southern Tagalog and other provinces stormed the NAPC office at the third floor of the Agricultural Training Institute, Elliptical Road in Quezon City.

Holding their placards and chanting, “Coco levy fund, ibalik sa magsasaka!” the farmers called on Rocamora to face them in a dialogue.

Initially, no one from the NAPC came to talk with the farmers, prompting the latter to make noise. After a few minutes, NAPC Undersecretary Oyen Dorotan approached the farmers, saying Rocamora was not there.

Willy Marbella, KMP deputy secretary general and a coconut farmer from Bicol who still holds stock certificates of coco levy funded oil mills, told Dorotan they are opposed to NAPC’s plan. Dorotan said she will relay to Rocamora the position of the farmers.

“We will never allow Aquino and Rocamora to use our money for the scandalous 4P’s and the anti-peasant CARP itself,” Marbella said.

Marbella feared that the coco levy funds would become “a seed fund of senatorial bets and party-list groups allied with Malacanang.”

Orly Marcellana, spokesperson of Kasama-TK, shared the same sentiment. “This is blatant corruption in the making.” “NAPC indeed will be misrepresenting the poor and other marginalized. Rocamora is already a part of Aquino’s ruling clique who exploits and lets the toiling masses die of hunger, joblessness, landlessness, and human rights abuse by state forces.”

Marcellana said that Akbayan, Rocamora’s group, is consistent in promoting the “anti-farmer and anti-people policies of the government.”

Zantoa echoed the same views and she spoke based on experience.

The woman farmer said the 4Ps program of the Aquino administration and the CARP failed to improve their lives.
Zantoa’s family is among the beneficiaries of the 4Ps program. “Even as we comply with the conditions, we do not receive the full amount of subsidy,” Zantoa told Bulatlat.com. “The same is true with the rest of our neighbors.”

Instead of receiving P1,500 per month for her five children, including an infant, Zantoa only received P800 for several months. For the past six months, she and her neighbors have not been receiving their subsidies.

“We do not know where the funds go,” Zantoa said.

Zantoa is also a beneficiary of CARP. She and the other farmers were given certificates of land ownership award in 2004.She could not pay for the amortization though, worth P125,000 per hectare.

“How can we pay if we earn so little?” Zantoa said. They could only pay P2,000 per year at the Land Bank.

Under CARP, their CLOAs would be forfeited if the farmer beneficiaries failed to pay amortization.

“It is a bogus land reform,” Zantoa said. “What we want is a genuine agrarian reform program.”

On October 19, Zantoa and the other farmers brought with them more than 100 coconuts and other production tools like “tapasan, tigkalan, itak, sangkalan, and koprasan” and cooked copra at the Chino Roces (formerly Mendiola) bridge.

The KMP called for the immediate cash distribution of the P56.5 billion coco levy funds to small coconut farmers.

The groups also called on the House of Representatives to immediately enact into law House Bill 3443 or the proposed Small Coconut Farmers’ Trust Fund Act filed by Anakpawis party-list Representative Rafael Mariano to pave the way for the return of the coconut levy funds.