President Benigno Aquino III’s excuse that cases of human rights violations being brought before it are mere “leftist propaganda’ is not only lame, it is dangerous as threats against human rights defenders intensify.

CEBU CITY — It has been a while since human rights worker Jose Luis Blanco spent time with his family, and his latest visit mid-October in Borbon town, two hours north of Cebu City, was a much needed respite from his stressful job. However, just when his visit was ending, alleged military elements visited his home and harassed his family.

On October 17, a person claiming to be a friend of Blanco and identifying himself as Loloy dropped by their house twice, the second time accompanied by a certain Benecio Wating, a known member of Guardians, a group associated with the military. Reports describe Loloy as chubby, fair skinned, narrow-eyed, and 5’4″ in height.

What alarmed Blanco’s relatives were the questions Loloy asked regarding Blanco, which they described as intrusive.

Blanco’s father said he suspected Loloy to be a government agent because even though he identified himself to be a friend of Blanco, his questions, which included the names of Blanco’s siblings, where he finished high school, or whether they permitted him to work in Negros, were obviously not questions that a friend who just happened to drop by the area to visit would ask.

This same Loloy, according to Blanco, also called and texted him using mobile number 0917-3031349. 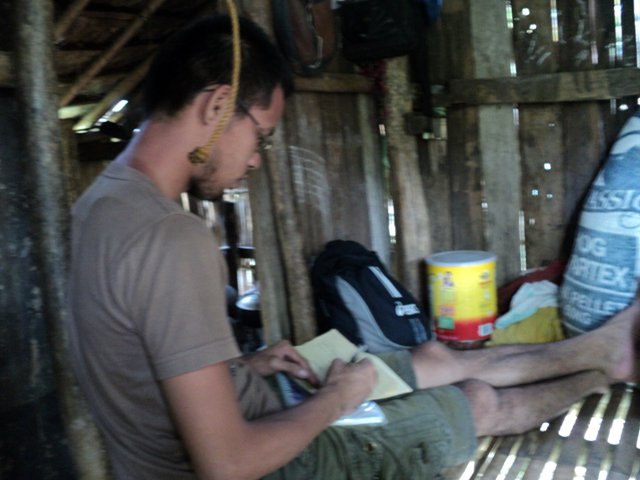 The messages included invitations to meet for lunch at a certain restaurant in Dumaguete City.

This is not the first time Blanco experienced harassment and threat from alleged members of the military.

Last June, an unidentified person posing as a member of Blanco’s family hacked his Facebook account and posted a status update on his Facebook wall claiming that he died in an encounter between elements of the Philippine military and the New People’s Army (NPA), the armed wing of the Communist Party of the Philippines. This worried Blanco’s friends and family.

At that same time when the message was posted on his Facebook wall, Blanco said members of the military harassed him on board a bus on his way to Dumaguete City. Blanco just finished investigating a case of harassment in Guihulngan City, when en route to Dumaguete City, government agents boarded the bus he was riding and tried to persuade him to cooperate with them, saying that they could help him with his needs. But before they made the offer, they made sure to let him know that they could easily inflict harm on him or his family should they choose to.

According to Dennis Michael J. Abarrientos, Karapatan-Central Visayas secretary general, Blanco has also been harassed through the filing of trumped up charges against him.

In 2010, Blanco was accused of kidnapping by the Commission on Human Rights through its field investigator in Negros Oriental, Jesus Cañete, and direct assault by the Philippine National Police. Legal scholars who appraised the cases claim that they were ridiculous and obvious fabrications.

In June 2012, Blanco was charged with violating Provincial Ordinance No. 5 when his group insisted on investigating alleged human rights violations by members of the military in the hinterland village of Siaton, Negros Oriental.

Provincial Ordinance No. 5 requires that a permit be secured from the provincial government for all medical and fact finding missions to certain areas in the province. Violations of the said ordinance entail criminal liabilities.

Non-government organizations are questioning the constitutionality of the said ordinance, stating that it impedes the right of a person to travel or the development of communities that need the assistance of private entities and socio-civic organizations. NGO workers also said that it is being used against them when they work with communities.

Human rights group Karapatan said this form of harassment on human rights workers is nothing new, especially with the implementation of the Aquino government’s counterinsurgency program Oplan Bayanihan. Nevertheless it is still a violation of the Universal Declaration of Human Rights and other human rights instruments of which the Philippines is a signatory.

“This is a systematic effort on the part of the AFP to destroy the credibility of human rights workers,” said Abarrientos.

Armed Forces of the Philippines Central Command spokesperson, Lt. Col. Christopher Tampus, however, told Bulatlat.com in a phone interview that the military does not tolerate any form of harassment perpetuated by government agents.

“The AFP fully supports the work of human rights workers,” he said.

He promised that they would help Karapatan in investigating the matter. However he requested that the group identifies the alleged agent and the unit to which the agent belongs to.

“We cannot just investigate if we do not know the unit,” Tampus said in the vernacular, adding that even if they are willing to do a line-up of agents, there are 2,000 soldiers based in Negros alone, and requesting for them to be pulled out for a line-up would be difficult.

Abarrientos, however, doubts the sincerity of the military, saying that based on their experience, whenever they file a complaint with the military or with the CHR, their complaints are dismissed outright and the burden of finding the evidences is always placed on the complainant.

It is because of this that the case of Blanco was instead forwarded to the United Nations Special Rapporteur on Human Rights Defenders and other international rights bodies to help pressure the Aquino administration to act on the case.

Abarrientos believes that subjecting members of organizations critical of the government to systematic harassment is one of the methods subscribed by the military in trying to recruit them as civilian agents.

Abarrientos said this is also the tactic that is being used by the military in trying to entice Blanco to cooperate with them, adding that once Blanco would agree to working for the military, the series of harassments would stop.

“We are not recruiting civilian agents,” he said.

But Abarrientos doubts this. He cited a recent attempt by the military to recruit a student from the University of the Philippines-Cebu.

A statement by the League of Filipino Students revealed that a certain John Darwin Kitt Muralla, a second year BA Political Science student of UP-Cebu was recruited by the AFP Central Command to gather information on the Visayas delegates to the group’s national convention, and to secure organizational documents, and plans of the group.

Abarrientos also said that in barangays in remote areas, farmers are also being recruited to monitor activities of members of “left leaning” groups.

“This endangers the lives of civilians,” he said, adding that many of these civilians are unable to decline the military’s request for fear that it would endanger their lives.

“This false accusation that rights organizations are fronts of insurgent groups is putting the lives of our workers in danger,” said Abarrientos.

“Instead of addressing the worsening human rights situation, the government claims that what human rights organizations are saying are plain propaganda,” he said.

“In order for the authorities to genuinely address tissues regarding human rights, they should first change their way of thinking, otherwise they won’t be able to do their job and fulfill their obligations,” he added.