The relatives of Rolly Panesa, the security guard who was mistakenly arrested by the military, said in their petition that Panesa’s personal circumstances “belie the claims of those who arrested him that he is ‘Benjamin Mendoza’ and this can be verified through proper inquiry and investigation.”

MANILA – Determined to prove the innocence of their loved one, relatives of the detained security guard mistaken for an alleged communist leader went to the Supreme Court, October 30.

The common-law wife and the sister of Rolly Panesa, a security guard arrested on October 5 by joint elements of the 2nd Infantry Division of the Philippine Army filed before the High Court a petition for habeas corpus. A habeas corpus petition, which literally means produce the body, if granted, will order the respondents to produce the subject of the petition.

Insisting that Panesa is Benjamin Mendoza, the alleged secretary of the Communist Party of the Philippines in Southern Tagalog, the authorities arrested, detained and charged Panesa with rebellion and frustrated murder. Panesa is now at the Security Intensive Care Area (Sica), Metro Manila District Jail at Camp Bagong Diwa while the Benjamin Mendoza being referred to by the military, according to an earlier statement from the National Democratic Front of the Philippines (NDFP), “continues to carry out his tasks and responsibilities in the NDFP.

“We are testing the validity of detention,” Ephraim Cortez, lawyer of Panesa, told Bulatlat.com in an interview. “The ground is that he is not Benjamin Mendoza.”

Cortez, also an officer of the National Union of Peoples’ Lawyers (NUPL), said documents prove the real identity of Panesa and his whereabouts from 1995 to 2012. “He should be released immediately,” Cortez said. 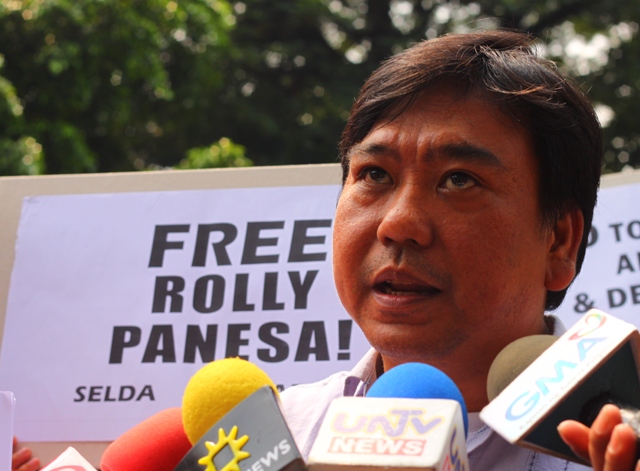 Lawyer Ephraim Cortez explains the nature of their petition to the members of the media.(Photo by Ronalyn V. Olea / bulatlat.com)

Named respondents to the petition are Maj. Gen. Alan Luga, commanding general of the Armed Forces of the Philippines Southern Luzon Command (Solcom); Maj. Gen. Eduardo D. del Rosario, commanding general of the 2nd Infantry Division, Philippine Army. After the arrest, the Solcom, through its spokesman Col. Generoso Bolina, announced the capture of Benjamin Mendoza and his wife Ka Luisa, according to a report from Sunstar.

Attached to the petition are various documents pertaining to Panesa’s identity, including the private security license card issued by the Philippine National Police’s Supervisory Office for Security and Investigation Agencies (Socia), certificate of employment issued by Megaforce Security Services Corportation, certificates of training issued by Task Force Security Academy, among others.

The petition also states that Panesa acquired a clearance from the National Bureau of Investigation (NBI) dated August 12, 2011. “This belies the claim…that Rolly Panesa is also an alias of ‘Benjamin Mendoza’ because if such were indeed true, then the same should have been reflected in the record of Rolly when he applied for an NBI clearance. A copy of the said document is also attached to the petition.

School records of Panesa, such as copies of his diploma from the Macabal-ong Elementary School in Magsaysay, Cadiz City and from Faraon Institute in Faraon, Cadiz City were also attached.

The petitioners argued that Panesa’s personal circumstances “belie the claims of those who arrested him that he is ‘Benjamin Mendoza’ and this can be verified through proper inquiry and investigation.”

The petitioners argued further that the warrant of arrest and the commitment order issued against “Benjamin Mendoza” cannot be made as basis for the continued detention of Panesa.

Meanwhile, Cristina Palabay, secretary general of Karapatan, who also assisted the family in the filing of the petition said that Panesa’s case “showcases the military’s arbitrariness in the conduct of its counterinsurgency program, the Oplan Bayanihan, and the government’s obsession to meet its self-imposed deadline to end the so-called insurgency.”

Panesa was also severely tortured, according to his common-law wife Marites Chioco.

“Let’s see what the Aquino government will do with this petition,” Palabay said. “This is another case where the relatives of a victim of human rights violation initiated the filing of a case in court to seek justice because the government failed, or refuses, to correct its own mistake. We would not want to hear the president again say that this is ‘mere propaganda’.”

During his visit to New Zealand, President Benigno S. Aquino III, in replying to a question about the state of human rights in the country, said that human rights violations are mere propaganda peddled by the Left.

Marites hopes for the best. “He told me he is bored to death,” Marites said. “I told him to just wait because we are working hard for his release.”