They got favorable rulings from the Labor Department and the Supreme Court and still, the owner of the bus company Times Transportation Company, Inc refuses to reinstate the bus employees and pay their back wages.

MANILA – Fifteen years after the bus employees of the now defunct Times Transportation Company, Inc. launched their strike, 10 years after they were ordered reinstated, and three years after they got a favorable ruling from the Supreme Court, they still have to fight for its implementation.

The bus workers had launched a strike in 1997. For this, they were all dismissed from their jobs after the labor dispute was issued an assumption of jurisdiction order by the Department of Labor and Employment. But in subsequent appeals, the union later won their case with their strike being declared as legal, thus removing the company’s basis for dismissing them. The Labor department, through its labor arbiter, issued an order for the workers’ reinstatement and the payment of back wages in 2002.

But the unionists, down to 126 from 147 at the start of the struggle, did not receive their back wages. Neither did they get their jobs back. Instead, they were forced to face further legal battles as the bus company reportedly filed appeals in court, culminating in a Supreme Court decision which again favored the workers in 2009. The high court also affirmed its decision against the bus company’s motion for reconsideration, also in the same year.

The Supreme Court ruled with finality that the TTCI management “effected, participated in… prohibited act of unfair labor practice” and that the company’s sale to Mencorp “was simulated and/or effected in bad faith.” 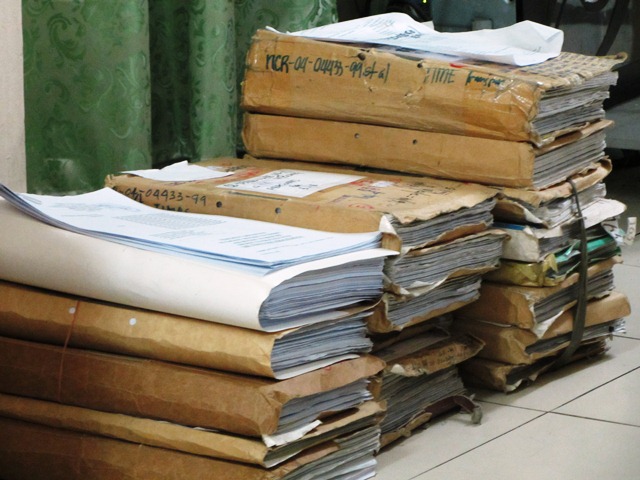 Papers of the Times Union case piled up over the years at the National Labor Relations Commission. (Photo by Marya Salamat / Bulatlat.com)

Three years after the high court decision, the bus workers and unionists, now older and mindful of the fact that only 60-percent of their members may be able to go back to work when reinstated, are still awaiting the writ of execution of the said decision. It is expected to come from the National Labor Relations Commission, particularly from the office of labor arbiter Patricio Libo-on.

But the now older bus workers are incensed that they are being pushed back to square one. The case for their reinstatement and back wages had dragged in court as the bus company allegedly changed ownership from the original owners to their daughter Virginia Mendoza, and its name from Times to Dominion bus company.

After the Supreme Court decided in 2009 that those changes are no reason for the bus company not to reinstate the workers and pay their back wages, its execution is now being delayed or scuttled by another purported change in the bus company’s ownership.

On top of the already bulky files of the collected motions and appeals regarding the case, another alleged owner of Times Transportation Company, the Mencorp Transport Systems, had filed a third party claim on the bus company. The unionists urged the labor arbiter to dismiss this claim.

Labor Arbiter Patricio Libo-on junked the third-party claim filed by one Melissa Lim who claims to have bought Mencorp from Virginia Mendoza, the former owner and majority shareholder of the TTCI. Now, Libo-on became the target of Mencorp’s motion for inhibition. They said that they “utterly lost their trust and confidence in his (Libo-on’s) fairness and impartiality.”

The workers viewed this as another delaying tactic. The union, with the help of KMU-affiliated National Federation of Labor Unions, countered the Times owners’ and Mencorp’s ‘urgent motion to inhibit’ with a “vehement opposition” which they filed this month.

Libo-on was not yet at his office in the NLRC when the Times bus employees held a picket at its entrance. An assistant in his office, showing the files on the Times bus company labor dispute, told Bulatlat.com that Libo-on will soon come out with a decision on the contending motions regarding his inhibition. But the assistant said it is somewhat a standard practice in the NLRC for labor arbiters to inhibit themselves when they are asked to do that, “out of delicadeza, unless the call for their inhibition seemed to be prodded only by caprice.”

The further delay in justice, the bus workers said, prompted them to try to “bring the case to the attention of the general public.” Times or Dominion transport company is basically a provincial bus company, plying bus routes to and from Northern Luzon provinces and Metro Manila.

From Nov 2 to Nov 5, the unionists alternately marched and drove in a caravan from Vigan, Ilocos Sur in the north of Luzon island to Quezon City in Metro Manila to conduct a picket in front of the National Labor Relations office. 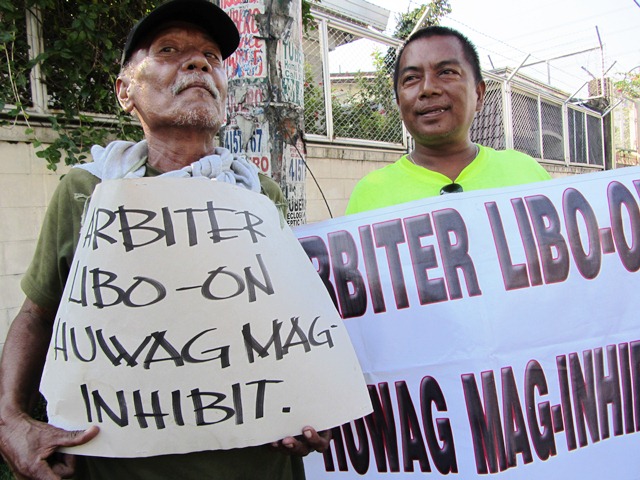 “If the NLRC cannot implement its own decision and that of the high court, what is its use?” asked Nori Arcayno, 50, president since year 2000 of the Times Employees Union. He added that if these were the prospects faced by unions who won their legal struggles, “how much bleaker is it for those who are just starting to file cases today?”

In their picket in front of the NLRC Nov 5, the workers demanded the release of the writ of execution ordered by the SC last Dec. 16, 2009 for the P97-million ($2.3 million) claim for back wages and other matters related to the case.

The workers also urged the NLRC to deny the petition filed by Mencorp Transport System Company, Inc., operator of Dominion Bus, against the Labor Arbiter handling the TTCI employees’ case.

“The Times employees’ struggle is a clear illustration of how the wheels of justice in the country grind exceedingly slow for workers. Their case shows the contemptuous indifference this government accords to issues of unfair labor practices and union-busting in the country,” Elmer ‘Bong’ Labog, KMU chairman, said in a statement.

“Many Times employees have died without seeing justice over their case served, while workers who are still alive are already in advance age, suffering from ailments,” Labog said. He urged the NLRC to act swiftly on this case in favor of the employees of Times.

The unionists vowed to continue fighting for justice. Labog said “Their victory is a victory, however partial and symbolic, of workers who suffered and are suffering from union-busting and unfair labor practices.”