One military unit claimed that councilman Ely M. Oguis, 60, was killed in an encounter between soldiers and NPA guerrillas; another military spokesman said he was a NPA tax collector who was killed by his comrades for not remitting his collections; while another said he was killed by the NPA for not paying taxes. But one thing is for sure, he was last seen drinking with a fellow councilman and two soldiers the night before he was killed.

MANILA — A village councilman in Guinobatan, Albay province was found beheaded, November 12. According to reports from the Karapatan chapter in Bicol, the councilman, 60-year-old Ely M. Oguis, was accused of being a tax collector of the New People’s Army (NPA) by the Philippine Army and was shot and decapitated.

Oguis, 60, was a member of the Albay People’s Organization.

Early on the morning of November 11, Oguis left his house to report for duty as village councilor at Cabaloaon village. He stayed at the village from 8 a.m. to 4 p.m., but did not immediately go home afterwards. Witnesses said that Oguis, as his practice, made social calls at the homes of various neighbors and other village residents after work.

Later that evening, he met with fellow village councilor Juanito Sumaupan, and neighbor Rodrigo Mirabite for a drink. Eventually, they were joined by the detachment commander of the 2nd Infantry Battalion Cpl. Gilbert Ramos and another soldier known only as “Patoy.”

Sumaupan said they drank a few bottles of beer before they moved to another store, this time owned by the victim’s daughter, Marlyn. The two soldiers left past 10 p.m., and Oguis followed some 30 minutes after.

Based on reports gathered by Karapatan Bicol, at around 11p.m., some of the residents heard gunfire. Sumaupan went back to Marlyn’s house, who is also a neighbor, to ask if she knew if her father had arrived home safely. Marlyn, in turn, called a sibling living in their parents’ house. She was told that Oguis had not returned. Not suspecting anything, Sumaupan returned home.

At 1:00 a.m. the following morning, November 12, another village councilor Minda Sumaupan, with three others were returning home from a wake in another village. When they reached Palapbuton subvillage, Cabaloaon, the group’s flashlight shone upon a person lying along the road. At first, the group thought the person was asleep in a drunken stupor. They were shocked when, after coming closer to the person, they found the body with no head. 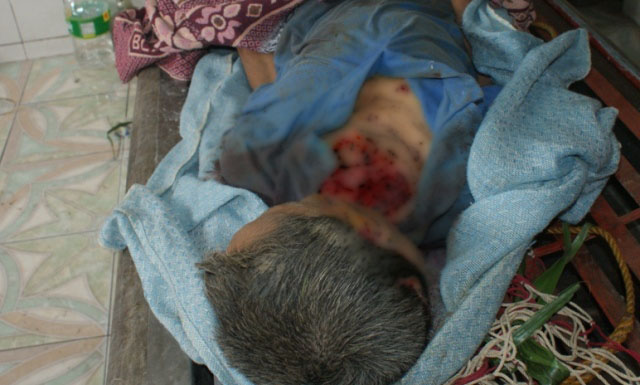 They immediately informed the village chief. Because of the darkness, the village captain decided to wait for daylight before investigating. At around 5 a.m., village officers examined the body. They found the decapitated head more than a meter away from the body, almost buried in mud, and identified it as Oguis. The ears had been hacked off.
The victim’s wife, Nila, and other family members were immediately informed. The body was taken to a funeral parlor in Guinobatan town proper for autopsy.

Initial information gathered by Karapatan-Bicol revealed that Oguis sustained five gunshot wounds in the chest causing severe damage to the lungs and heart. The decapitated head also bore signs of being hit with a hard object.

In the meantime, units of the Armed Forces of the Philippines have already released statements, each one in conflict with the others.

On Nov. 12, Major Narzan Obuyes, spokesman of the 2nd Infantry Battalion of the Philippine Army, said that an encounter between the NPA and the military occurred at the military detachment in Cabaloaon village. Col. Ricardo Visaya, commanding officer of the 901st Brigade based in Daraga, Albay, said that Oguis was an NPA tax collector and may have been killed by the NPA as punishment for not remitting collections.

Another military spokesman, Maj. Angelo Guzman of the 9th Infantry Division said that Oguis was a small-scale coconut plantation owner and that he was killed by the NPA for not paying taxes.

The National Democratic Front of the Philippines (NDFP) in Bicol, however, has already issued its own statement, saying that there was neither NPA presence in the village nor an encounter.

In a statement sent to Bulatlat.com, Vince Casilihan, spokesman of Karapatan-Bicol and among those who conducted an independent investigation of the incident, quoted the residents as saying that they never heard any firefight. The gunshots did not last for even a minute, Casihilan said.

“The military is lying to cover up for their heinous crime,” Casihilan said. “They are the only ones who have the motive to kill Oguis.”

The heavy deployment of soldiers in Guinobatan, Albay began in July 2011. The 2nd IBPA arrived in 11 villages, including Cabaloaon. The soldiers first used the village hall as their headquarters before forcing the residents to set up their detachment in the village center. It is still, however, right near the village hall.

Karapatan-Bicol has previously documented several incidents of the military issuing threats and harassing residents, among them Oguis.

On August 21, 2011, soldiers known only as Ontolan and Amolar invited Oguis to their detachment. In a sworn statement, a copy of which was sent to Bulatlat.com through email, the councilman said the two soldiers accused him of being a member of the NPA, and told him to leave the group. Oguis vehemently denied the accusations and asserted that he was only a village councilor.

In the same affidavit, Oguis related that sometime in August of the same year, the military ordered the residents to bring bamboo and other materials for their headquarters. Oguis said that out of fear, the residents obeyed and built the structure without any payment.

Karapatan-Bicol noted that the military also did the same to Bayan Muna member Rodel Estrellado.

On February 25, 2011, Estrellado was walking home from a local market in village 3, Malilipot, Albay, after buying food for his family. According to witnesses, at around 9 a.m., around four men who introduced themselves as members of the Philippine Drug Enforcement Agency (PDEA) accosted Estrellado and forced him inside a gray car with plate number MXN 902.

It was found out later that three hours before Estrellado’s abduction at 6 a.m., the spokesman of the 9th Infantry Division Maj. Harold Cabunoc issued a statement that an alleged member of the NPA named Elmer Estrollado was killed in an armed encounter in the village of Buluang, Bato, Camarines Sur.

Also on the same day at 1:25 p.m., a certain Major Danilo Ambe and 2nd Lt. Maribel Donilla based in Mabaludbalud, Tigaon, Camarines Sur filed a blotter report at the PNP Bato that they conducted a strike operation in Buluang, Bato that resulted in the death of one Elmer Estrellado.

Two days after Estrellado’s abduction, February 27, Estrellado’s family decided to go to a funeral parlor where they heard an “Elmer Estrellado” had been taken. They had previously looking for Rodel in various army camps, but the military denied having him in custody.

In the funeral parlor, the family found their loved one’s body under the name “Elmer Estrellado.”

Casihilan said the killing of Oguis is part of the implementation of the Aquino administration’s counterinsurgency program Oplan Bayanihan. “The state forces who present themselves as Community Peace and Development Team (CPDT) are no different from the bloody Special operations teams of Arroyo’s Oplan Bantal Laya I and II.