In North Negros, deception paved the way for mining

SAGAY CITY, Negros Occidental – As the fishing boat was nearing the site where Aspac Dredging and Restoration Inc. was believed to be operating, a group of men shooed the fact finding team away. One of them even ran at the edge of the shore trying to drive the team away.

James Ramos, one of the fisherfolk in Old Sagay, said they have not been able to fish in the area since the onset of magnetite mining in the mouth of Himoga-an river. Similar to what happened to the fact finding team, guards hired by Aspac would drive them away. It was, in fact, their first time to go there again, along with three members of an international fact finding mission, since the mining company operated in their community.

The mission, led by the Asian Peasant Coalition, aimed to look into the impact of mining on the environment and the lives of the peasants and fisherfolk in Negros Occidental.

Earlier that day, the fact finding team tried to pay the mining site a visit. But Leo Lentejas, who introduced himself as the administrator of the mining site, barred them from entering even if they have already secured permission from Old Sagay’s village chief Felissa Dela Cruz.

Locals attributed their lower income nowadays to the ‘dredging operations’ in the mouth of the river. The mining company’s public declaration is that they are doing dredging operations when, in fact, they are doing magnetite mining. The daily income of the fisherfolk decreased from at least $8.5 to $1.2 or at least by a whopping 700 percent. Families were displaced from their homes and livelihood. They observed the mining operations’ negative environmental impact along the coastal area.

Though its operations have already stopped for a year now, residents fear Aspac would return in a few months time with better equipment to mine more magnetite under the guise of dredging. Aspac’s permit, after all, is set to end on Oct. 6, 2016, according to Mines and Geosciences Bureau’s list of existing mineral processing permits.

Sagay City Mayor Rafael Cueva, nephew of Gov. Alfredo Marañon Jr., supposedly hired the services of Aspac to “dredge” the river for the price of $241,463.

In a public forum sometime in August 2011, Ramos said village and city government officials went to their community to present the magnetite mining operations to residents. Nestor Mitante, 45, told the fact finding mission that the local officials promised them that the magnetite mining operations would be stopped if it would cause any negative impact to the local community.

“After only two months of operations, progressive erosion along the river banks was observed by the communities. Flood in the houses of the residents occurred,” the report of the fact finding mission read.

Instead of fulfilling their promise to the residents, Ramos said local government officials held another forum sometime in January 2012, where they claim that the project is only a dredging operation. When concerned fisherfolk launched a signature campaign against the mining operations, Ramos said, village officials countered it with their own signature campaign in support of the project but managed to get only a few signatures.

Residents told the fact finding team that the mining company started on October 2011 and was last seen shipping out extracted minerals on March 2012, two months after the “repackaging” of the project took place.

Old Sagay’s village chief Felissa Dela Cruz told the fact finding team that the “dredging” was necessary to improve fish catch for their constituents, whose livelihood depends on it. She said the heavy siltation in the mouths of the river keeps big fish from entering fishing pens and, therefore, needs to be de-clogged. She claimed that Aspac only extract magnetite from the dredged silts.

“If you find gold, would you throw it away?” she told the international fact finding team in Filipino.

In a local news report, MGB regional director Leo Van Juguan confirmed that Aspac was granted processing permit to extract magnetite from the materials it dredged. He said the company applied for permit to extract the magnetite after discovering that 10 percent of the silts they were dredging contain the said mineral. 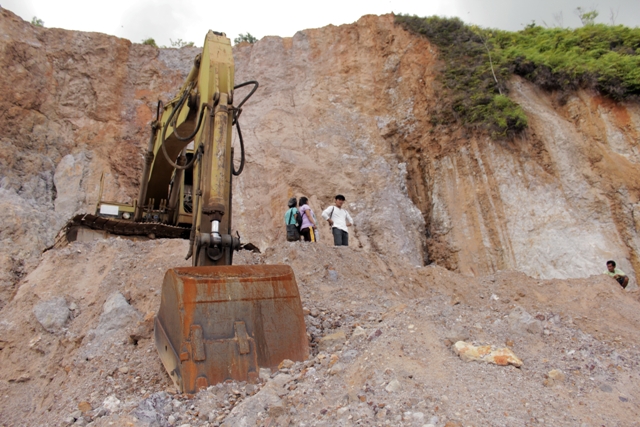 Several kilometers away from Old Sagay, in the village of Baviera, residents were also not informed that a mining company would operate in the area. Jiezel Belmonte, a former village official, said they only learned about the mining project when it was already operating.

During her term as a village councilor, there has been an attempt to pass a resolution to allow silica mining in their community. But Belmonte, together with then village chief Eleno Tronson, voted against it because they were afraid of its possible adverse effects. Under the current village officials, however, Belmonte said, silica mining was finally allowed even when residents are against it.

The silica mining site is located at the top of Sherman Hill in Baviera, which, according to Reggie Itchon who introduced himself to the fact finding team as the mining site’s administrator, is private property. The MGB, in its website, stated that Silicon Development Corporation, owned by Luis Y. Hofilena, covers 110 hectares. The company was allowed to extract silica, sand and quartz. Its exploration permit was approved on June 23, 2004 and will expire on June 23, 2029.