Brig. Gen. Eduardo Año has been assigned as the new chief of the Intelligence Services of the Armed Forces of the Philippines (Isafp). He was tagged in the abduction of activist Jonas Burgos, son of press freedom icon Jose Burgos Jr., who has been missing since on April 28, 2007.

Año’s promotion crushed the hearts of members of the Burgos family.

“The swearing in of Año in Malacanang as the new ISAFP chief has annihilated whatever small hope I held on to, that in time, during this dispensation, the human rights situation in the Philippines would improve and the surfacing of my son Jonas would follow soon. Lord have mercy on Jonas and other human rights victims,” Mrs. Edita Burgos, mother of Jonas, said in a statement.

Jonas’s younger brother, JL, called for support via his social media account: “The new ISAFP chief, Brig. Gen. Eduardo Año is suspected to be the abductor of Jonas Burgos. Please let the whole world know that a suspected criminal was promoted to a very sensitive position.”

In June last year, the Burgos family filed charges of arbitrary detention and possible murder against Año and several other military officials before the Department of Justice. 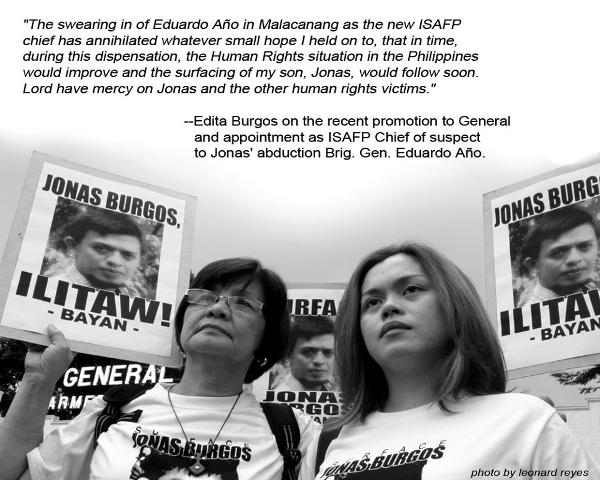 this photo has become viral on Facebook.(Photo by / bulatlat.com)

The court concluded its preliminary investigation on the case and the DOJ has yet to issue a resolution.

When Año was promoted from colonel to brigadier general in October this year, Mrs. Burgos said : “Today, I fear that the message relayed in such blatant act by authorities can be a justification for human rights violators to continue their abuses.”

Año, who served as commander of the 201st Brigade of the Philippine Army, also figured in the torture of youth activist Franklin Barrera.

“This government is no different from its predecessors. It is not only deaf to the calls of human rights victims, but gives more medals to those accountable for human rights abuses,” Malabanan said.

JL called on international human rights groups to file a protest with the Philippine embassy on the promotion of Año.

For human rights group Karapatan, the appointment of Año and of Brig. Gen. Aurelio Baladad as Armed Forces of the Philippines (AFP) deputy chief of staff for operations spells doom for the country’s human rights situation.

Baladad is implicated in the arrest, detention and torture of 43 health workers, collectively known as the Morong 43. In May, then colonel Baladad, was promoted to brigadier general and assigned as commanding general of the 9th Infantry Battalion of the Philippine Army.

Baladad is one of the suspects in the torture charges filed by the Morong 43 in May this year.

Following Baladad’s promotion, Dr. Alexis Montes, one of the Morong 43, filed an opposition and asked the Commission on Appointments to reject the promotion of Baladad and Gen. Jorge Segovia, another respondent in the torture case.

“Aquino puts across the message that a reward awaits those who kill, bomb, strafe, force people to leave their homes, harass and threaten them, arrest, torture then keep them in jail. The people should brace themselves for more serious human rights violations…with…this kind of military officers who are at the helm of the military institution,” said Karapatan chairwoman Marie Hilao-Enriquez.

In its yearend report, Karapatan revealed there were 129 victims of extrajudicial killings and 150 cases of frustrated killings, more than 30,000 victims of forced evacuation due to bombings and military operations.

Members of Karapatan-ST and Save Bondoc Peninsula Movement held a protest action in front of the Southern Luzon Command (Solcom) of the AFP and painted a ‘bloody trail’ depicting the worsening cases of human rights violations under the Aquino administration. They will join the protest in Manila on December 10.